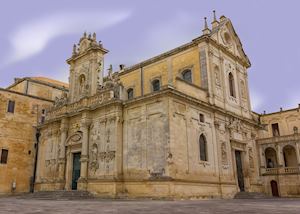 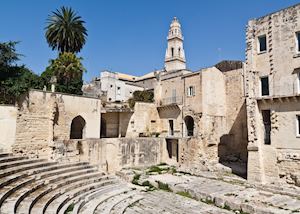 Lecce's main square, Piazza Sant’Oronzo, is part swallowed by a sunken 2nd-century Roman amphitheatre, which sits below the modern level of the city. With seating for 15,000, it once marked the end of the ancient Via Appia (Appian Way), which connected Rome with the south of Italy.

A couple of blocks away are the remains of a Roman theatre, now a small museum exhibiting well-preserved frescoes and mosaics from other local sites.

Our expert guides to exploring Lecce

Written by our specialists from their own experiences of visiting Lecce, these guides will help you make the most of your time there. We share both our practical recommendations and the best ways to appreciate Lecce at its best.