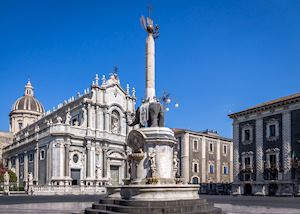 However, you'll get a more authentic feel for local character at La Pescheria, the daily fish market. Here, boisterous traders vie for attention and locals pick their way through stalls piled high with sardines, shellfish and squid. The laneways nearby are lined with stalls laden with luscious-looking fruit and vegetables — the pay-off of risking farming on the slopes of a volcano.

Viticulture here goes back to prehistoric times and plays a large part in the mythology of the region. Vines flourish in the mineral-rich soil, while the mountain's diverse micro-climates and the vineyards' differing elevations produce complex, high-quality wines with a distinct character.

This sample itinerary will give you an idea of what is possible when you travel in Mount Etna, and showcases routes we know work particularly well. Treat this as inspiration, because your trip will be created uniquely by one of our specialists.

Written by our specialists from their own experiences of visiting Mount Etna, these guides will help you make the most of your time there. We share both our practical recommendations and the best ways to appreciate Mount Etna at its best.