Sicily's most elegant city, Syracuse once rivalled Athens in importance and dominated trade across the Mediterranean in ancient times. It was a highly sophisticated and prosperous place that attracted leading statesmen, traders, artists and architects and their legacy is clear as you walk the streets today. 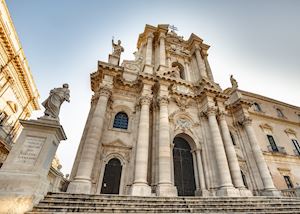 Syracuse was once one of the most important cities in the Greek Empire and many ruins can be found in the archaeological park northwest of the present town. Most impressive is the 5th-century Teatro Greco, an ancient theatre that sat 16,000 people and was the debut venue for many famous Greek tragedies. It’s still used today for performances during the annual Greek drama festival in May and June.

This sample itinerary will give you an idea of what is possible when you travel in Syracuse, and showcases routes we know work particularly well. Treat this as inspiration, because your trip will be created uniquely by one of our specialists.

Our expert guides to exploring Syracuse

Written by our specialists from their own experiences of visiting Syracuse, these guides will help you make the most of your time there. We share both our practical recommendations and the best ways to appreciate Syracuse at its best.