A fusion of cultures: our highlights of Malaysia guide

Malaysia is an ideal starting point for anyone looking to dip their toe into Southeast Asia for the first time. The infrastructure is good, distances between destinations are short, and the cosmopolitan capital of Kuala Lumpur counterbalances the simple pace of rural life.

For me, a classic trip across Malaysia would take in Malay, Chinese and Indian influences — I particularly like the way you can taste this blend of traditions in a single dish. Its history is also one of colonisation — by the Dutch, the Portuguese and British, showcased by an array of architecture.

The region boasts primary rainforest, tea plantations, and – perhaps most tempting – some of the best-value beach stays across Southeast Asia. I’ve collected my highlights below.

Start with the capital, Kuala Lumpur 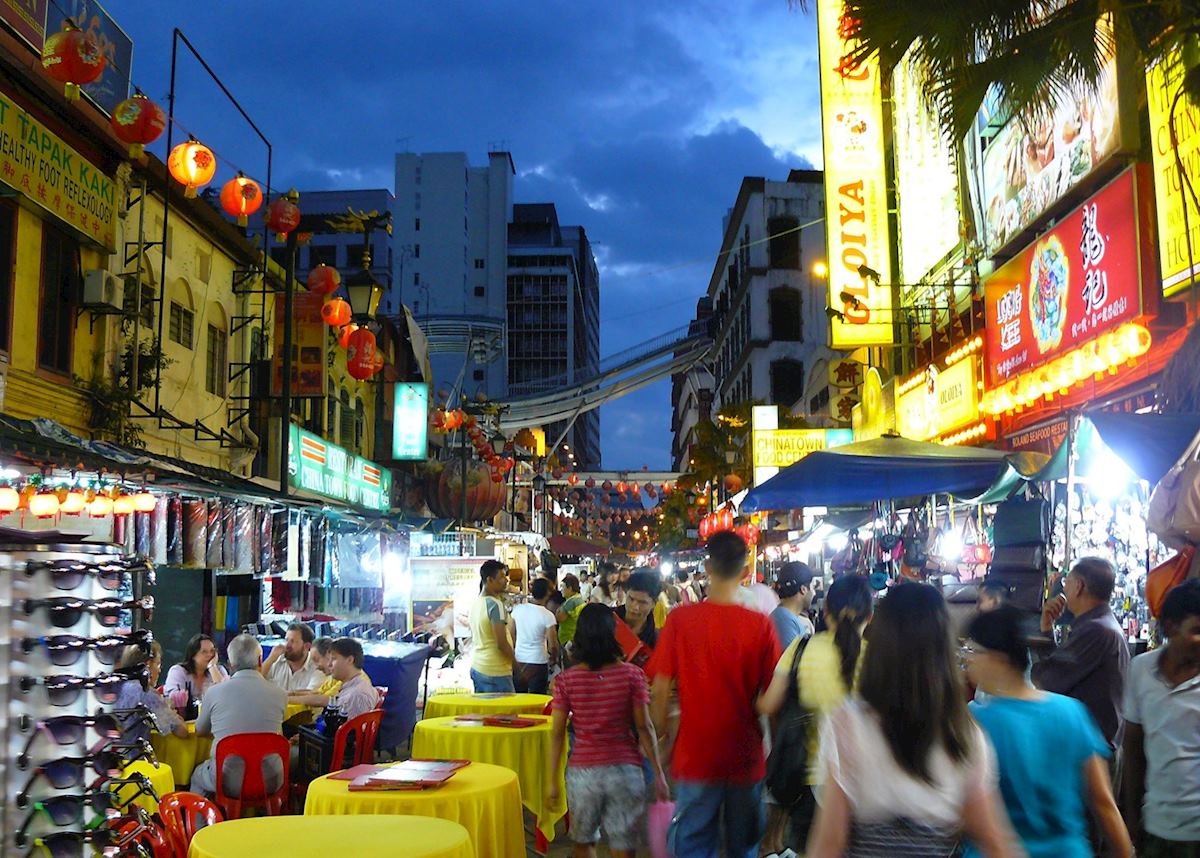 It's likely that your trip will begin in Kuala Lumpur (KL to its residents) and there are several ways to get your bearings, depending on how you like to see a city.

A guided walking tour of the heritage buildings, churches and mosques of the city’s ‘colonial core’ is a good way to absorb Malaysia’s history. It’s a nice contrast to then take a cycling tour around Kampong Bahru, one of the oldest districts, which has retained a traditional Malay village feel, despite being surrounded by skyscrapers.

Everyone wants to visit. But controversially, I suggest heading to a sky bar instead. From the balcony of Vertigo, on the 59th floor of the Banyan Tree Hotel, you can look out across the KL skyline. You’ll get the best view of the illuminated Petronas Towers and the Menara KL Tower — plus, unlike the Petronas viewing platform, there’s no time limit, so you can linger as long as you like.

The colonial city of Malacca 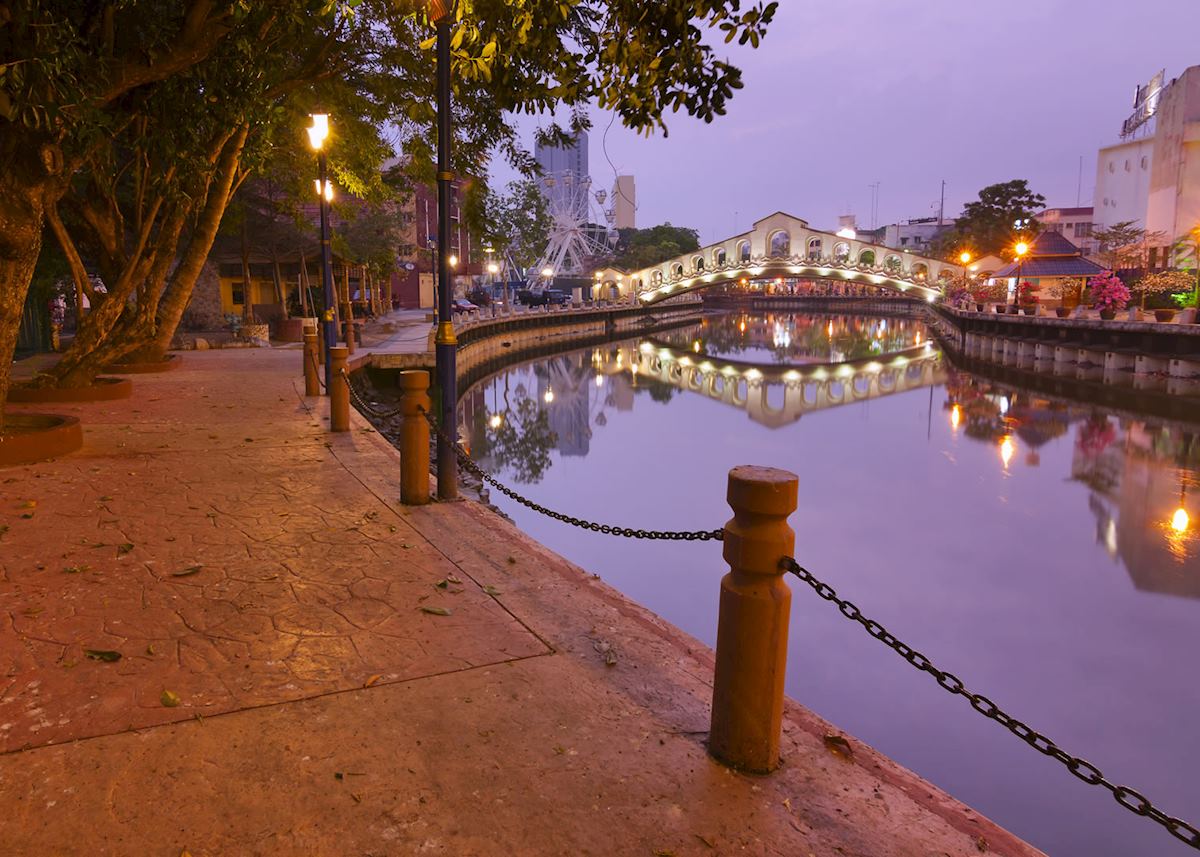 Just a couple of hours’ drive southeast of KL, and only 90 minutes from the international airport, Malacca works well at the start of a trip to Malaysia.

The Portuguese, Dutch, Chinese and British all chose to settle here, resulting in a fusion of food, architecture, and religions. As you explore, you'll see a juxtaposition of Portuguese Catholic churches alongside Chinese shophouses.

I'd take a couple of days to wander the cobbled streets of this riverside town at your own pace. The town's manageable size means a guide isn't a necessity and it's a pleasure to explore on foot — or on the back of a trishaw (much like a rickshaw, but covered with flamboyant flowers), if you prefer.

Joining one of the cooking courses available across the country, you can spend a morning with a chef who’s especially skilled in Kristang cuisine. The Kristang community has a Portuguese Catholic heritage that’s fused with Malay over time. Dishes might include pickled pineapple, curried potatoes and sabola fretu (onion fritters). 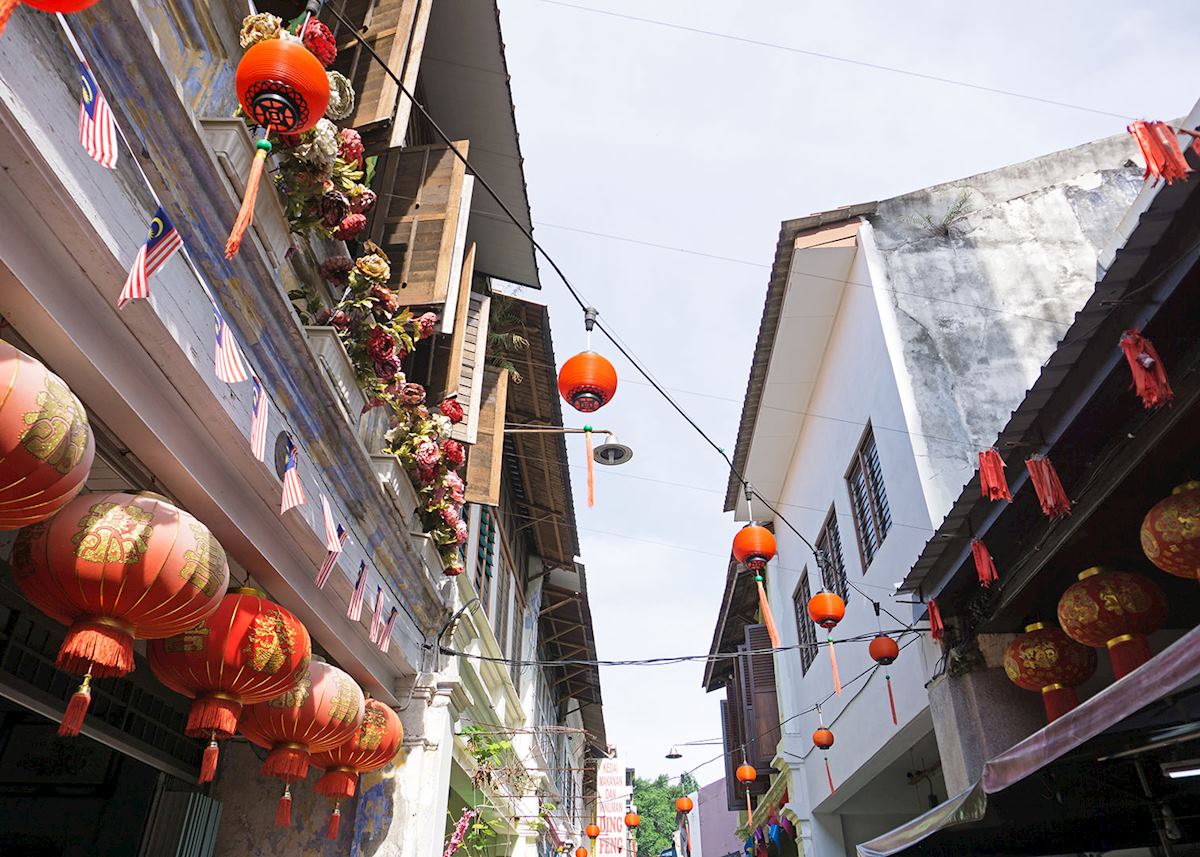 There’s not a lot going on in Ipoh, but that’s part of its charm. While many Malaysian towns began to boom in the 1980s and 1990s, this former tin-mining town is still a low-level mix of Chinese shop houses, narrow alleyways and former colonial homes.

These heritage streets are now busy with kedai kopi (coffee shops), boutique shops and artist residences — it’s easy to while away a relaxed day here as you travel between KL and Penang.

One thing that might persuade you to linger is The Banjaran Hotsprings Retreat. Cradled in a jungle-covered valley just outside the town, it’s built around natural waterfalls, hot springs and caves. Rooms have their own pools, there are enough spa treatments to keep you pampered for days, and the restaurant and wine bar is set in an illuminated limestone cave. 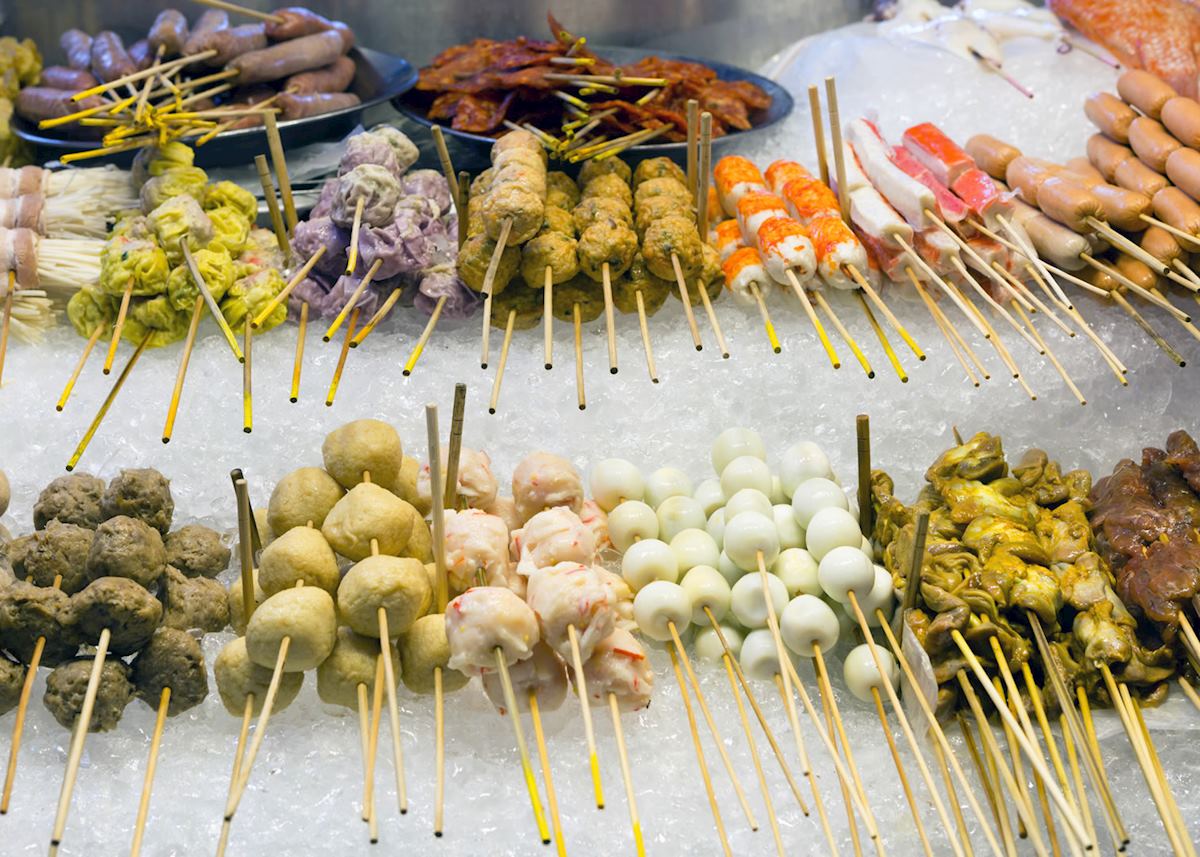 George Town, the capital city of the west-coast island of Penang, is a UNESCO-protected former British port on the Strait of Malacca, one of the world’s busiest waterways.

Food very much forms the cultural pulse of Penang. For generations, street-food hawkers have passed down their most prized family recipes to their offspring. Today, you can taste how the progressive waves of settlement have given rise to a union of ingredients.

A frenzy of vendors line the streets, which are best navigated at night (for the lively atmosphere) with a guide. As well as helping you get around, your private guide can explain the difference between Cantonese, Hokkien and Hainanese cuisine — all Chinese regional variants. Look out for char koay teow, a spiced prawn noodle dish I particularly liked. 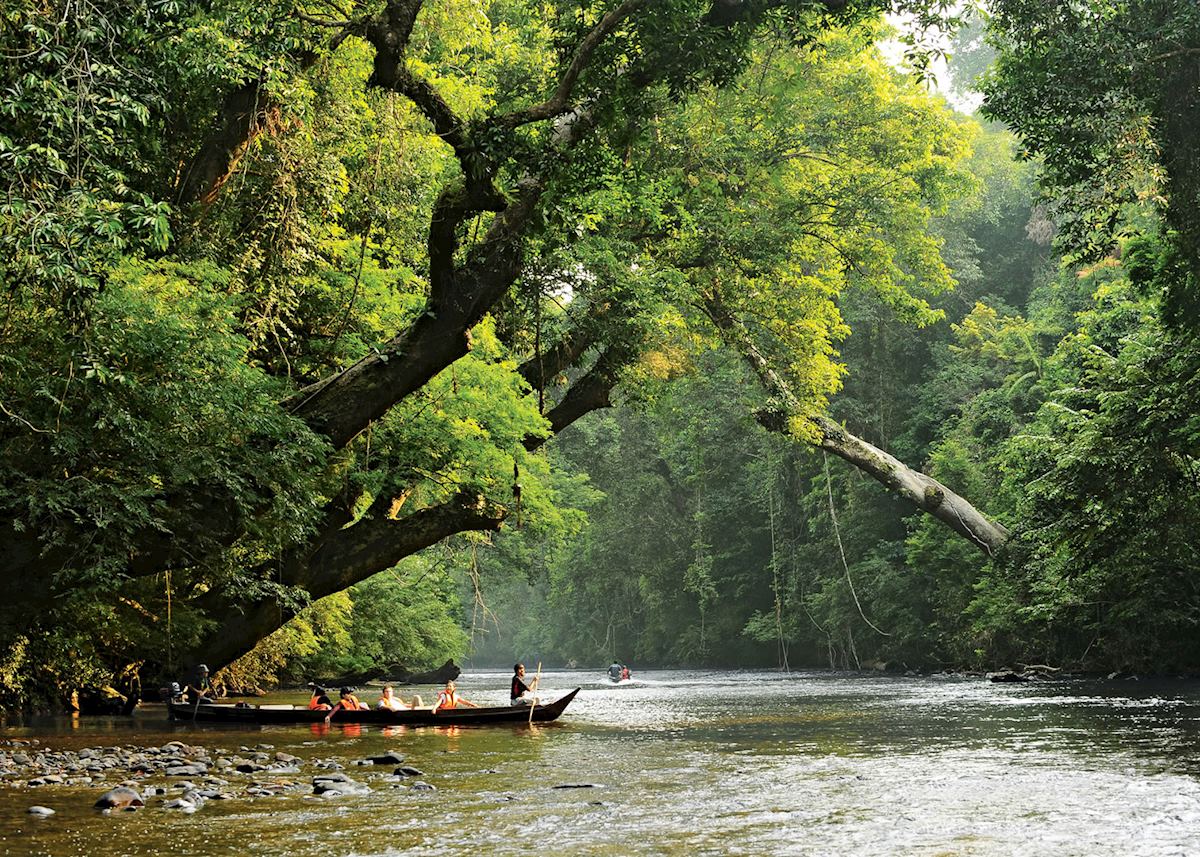 Said to be the world’s oldest rainforest, Taman Negara National Park is in the middle of the Malay Peninsula, about a three-hour drive from KL. The park’s appeal lies not in its wildlife, but in its primary vegetation. This is best viewed from the canopy walkway (the longest of its kind in the world) sitting 45 m (147 ft) above the forest floor.

Trips here are run by the park authorities, ranging from strenuous two-to-three-night treks, to gentle walks along the boardwalks (ideal for young families). You’ll stay in the simple but comfortable park lodge.

Taking the two-hour longtail boat cruise from Kuala Tembeling into the park is the most atmospheric way to arrive. Look out for sightings of long-tailed and stump-tailed macaques and tapirs from the boat.

Tea estates in the Cameron Highlands 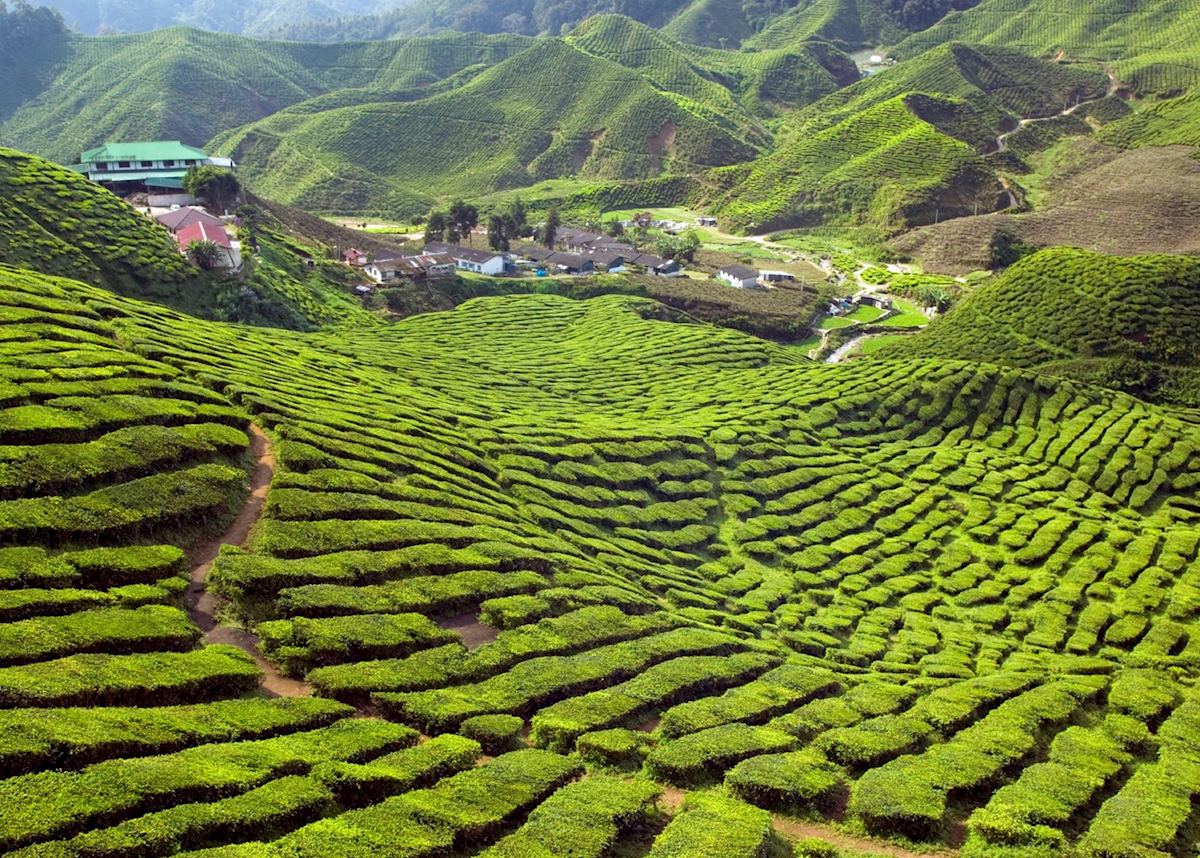 After the arrival of Sir William Cameron in 1885, the Cameron Highlands developed into a retreat for the colonial British.

Today, much of the country's fruit and vegetables are harvested there. But, there’s still a British feel to the region’s mock-Tudor houses, country gardens, and strawberry patches. Because you’re at a higher altitude, the cool air offers some respite after the sweltering humidity of the lowlands.

While you're here, spare some time to visit the Boh Tea Plantation to learn about the traditional methods of tea production. This tour rounds off nicely with your choice of tea and cake on the veranda, looking out over the rows of squat tea plants. If you’d like to be more active, you could combine this with a guided walk through the highland mossy forests.

I'd allow two nights here, avoiding weekends as it’s a popular Malay getaway. The area fits in nicely on the way to Penang from KL. 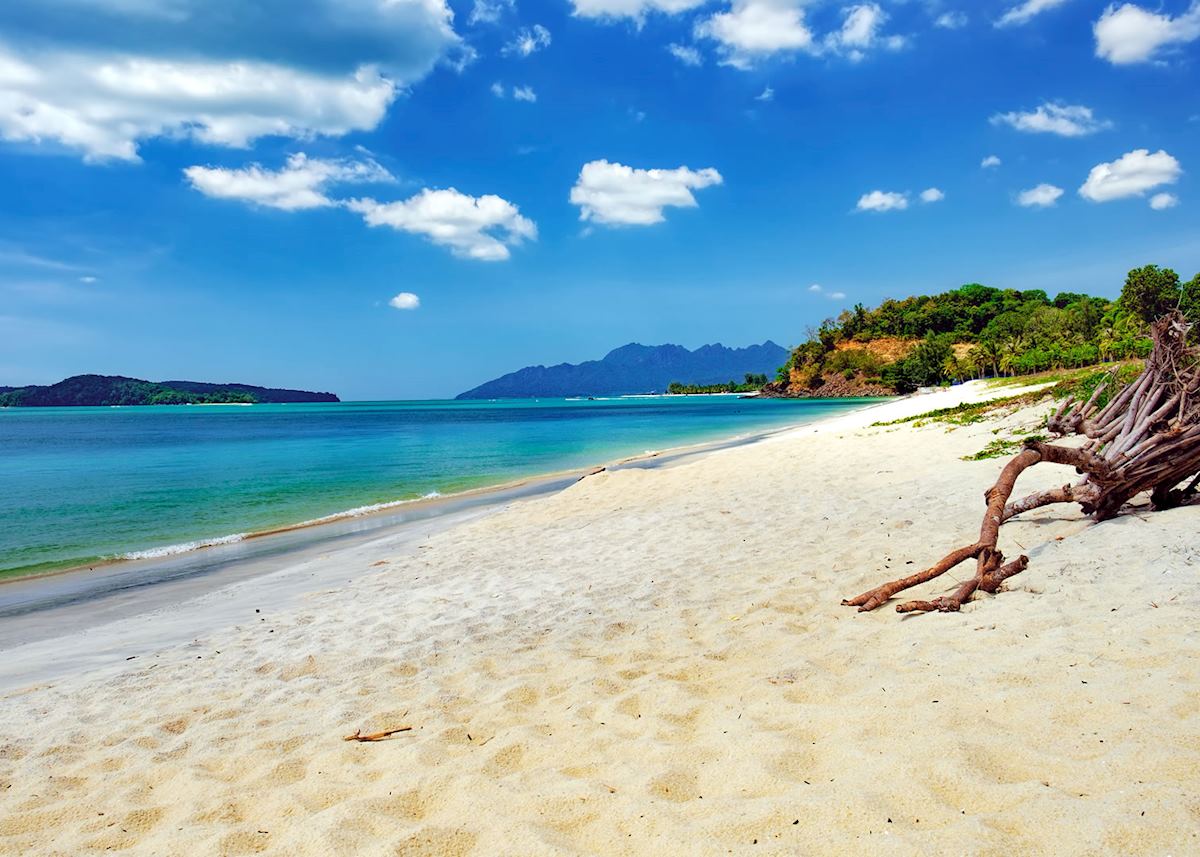 With two long stretches of coast and a smattering of islands, Malaysia has quite the buffet of beach destinations. Seasonality is key, so from November to May the weather is best along the west coast, where you’ll find the more luxurious hotels. From May to October, look to the east coast — the region for diving and snorkeling. I’ve picked my top three beach destinations below. 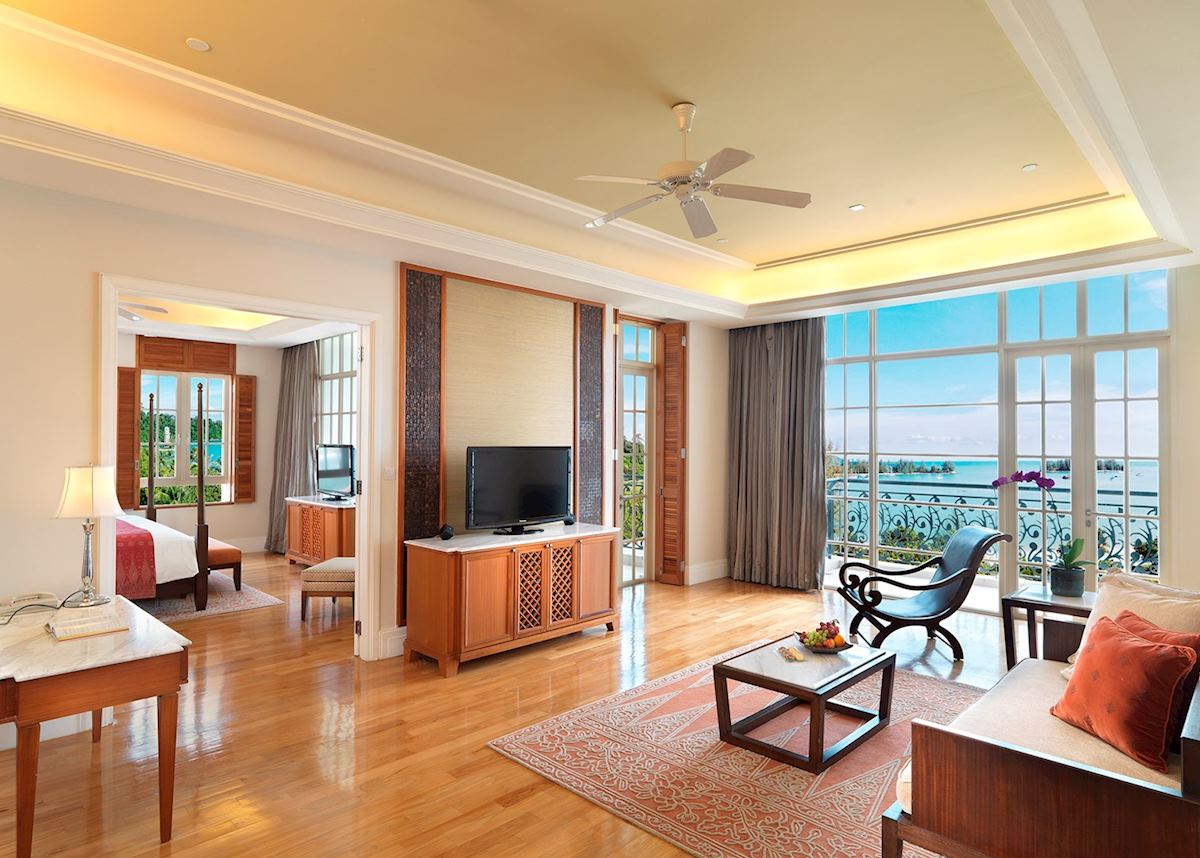 Life on Langkawi is all about luxury and relaxation. It’s mostly about being idle, but if you have a spurt of energy you could go rainforest trekking or kayaking through coastal mangroves.

The Datai Langkawi is my first choice of places to stay. It’s set between a crescent-shaped bay and dense, virgin forest where squirrels flit through the trees and butterflies are everywhere. It ticks all the boxes if you’re looking for luxury, including secluded jungle villas that wrap around a private pool.

The highlight, though, is the hotel’s focus on the surrounding environment. Drag yourself away from the two pools or beach and you can follow canopy walkways, jungle trails and join guided walks run by the in-house team of naturalists. A less-secluded option is the Danna, a colonial-inspired resort close to the bars, restaurants and markets of Telaga Marina. You’ll see the yachts passing by from its white-sand beach.

The island has an airport with flights from Kuala Lumpur or Penang. 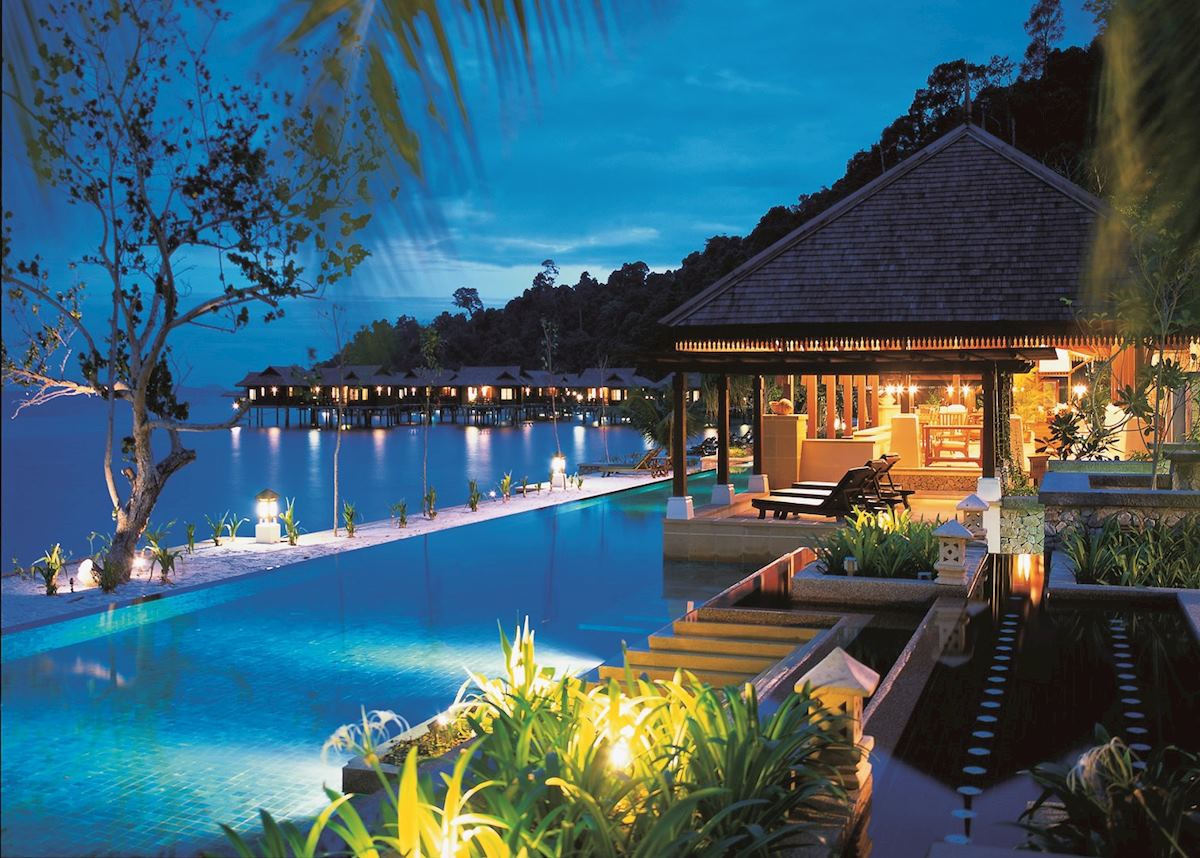 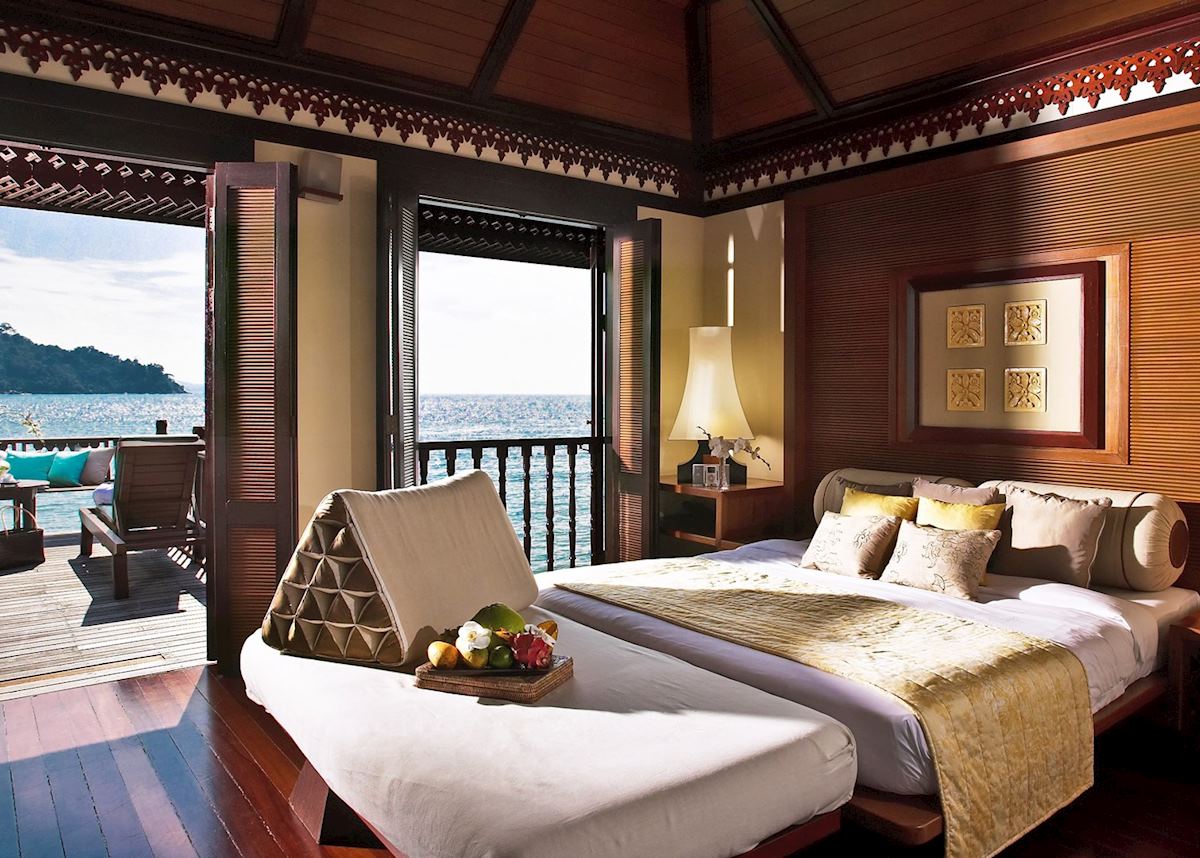 Pangkor Laut Resort is a 20-minute speedboat ride from the mainland town of Lumut, set on its own private island. A series of luxury villas blend harmoniously with their surroundings — some by the beach, some perched on the hillside among rainforest, and others built over the water on stilts.

The island maintains a peaceful, tranquil air, but with enough facilities to keep you occupied. You can dine in its seafood restaurants, relax in the resort’s infinity pools and swanky spa, try a range of water sports or go walking through the island’s jungle interior.

When I was last there, I went for a swim at Emerald Bay, a short shuttle bus across the island from the resort. Apart from a small beach hut serving food and drink, you can swim out to sea, look back, and see nothing but coast, rainforest, and sky.

Lumut is a three-hour road transfer from Kuala Lumpur, so it’s a convenient place to end your time in Malaysia. 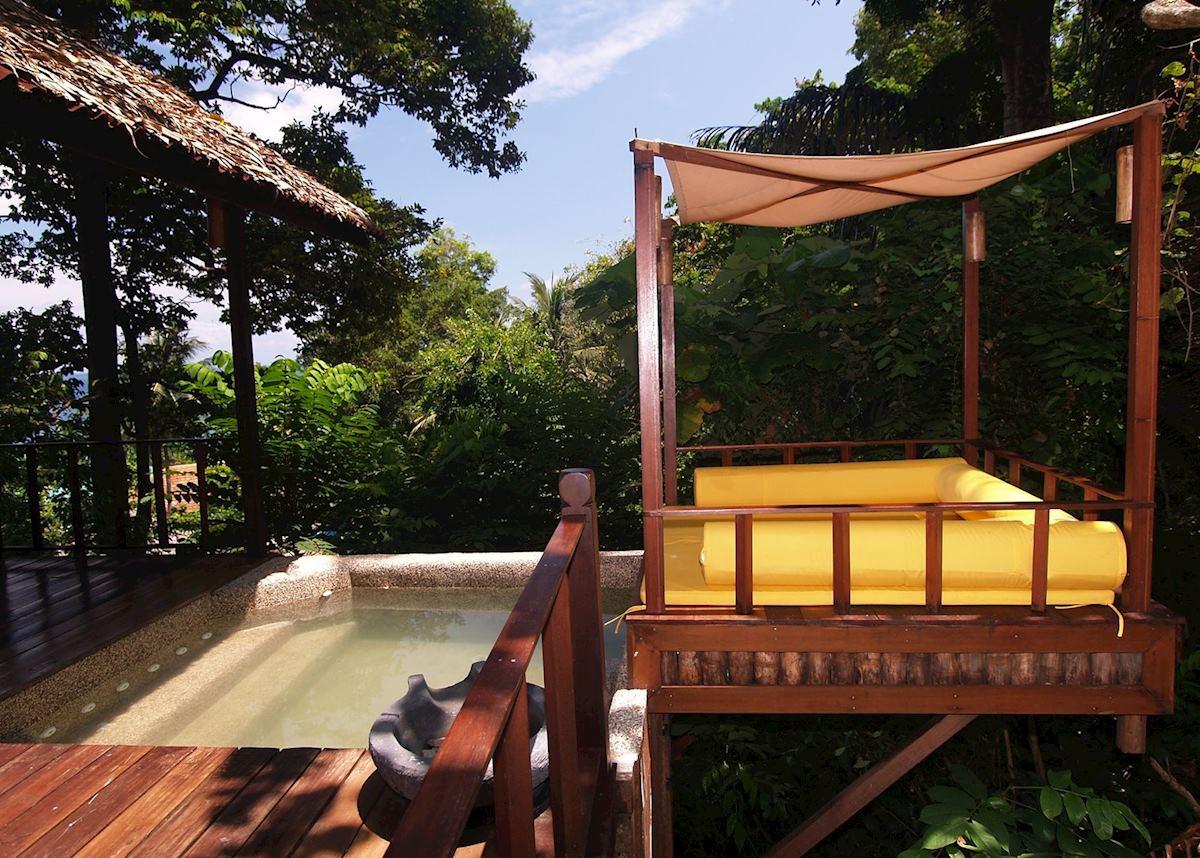 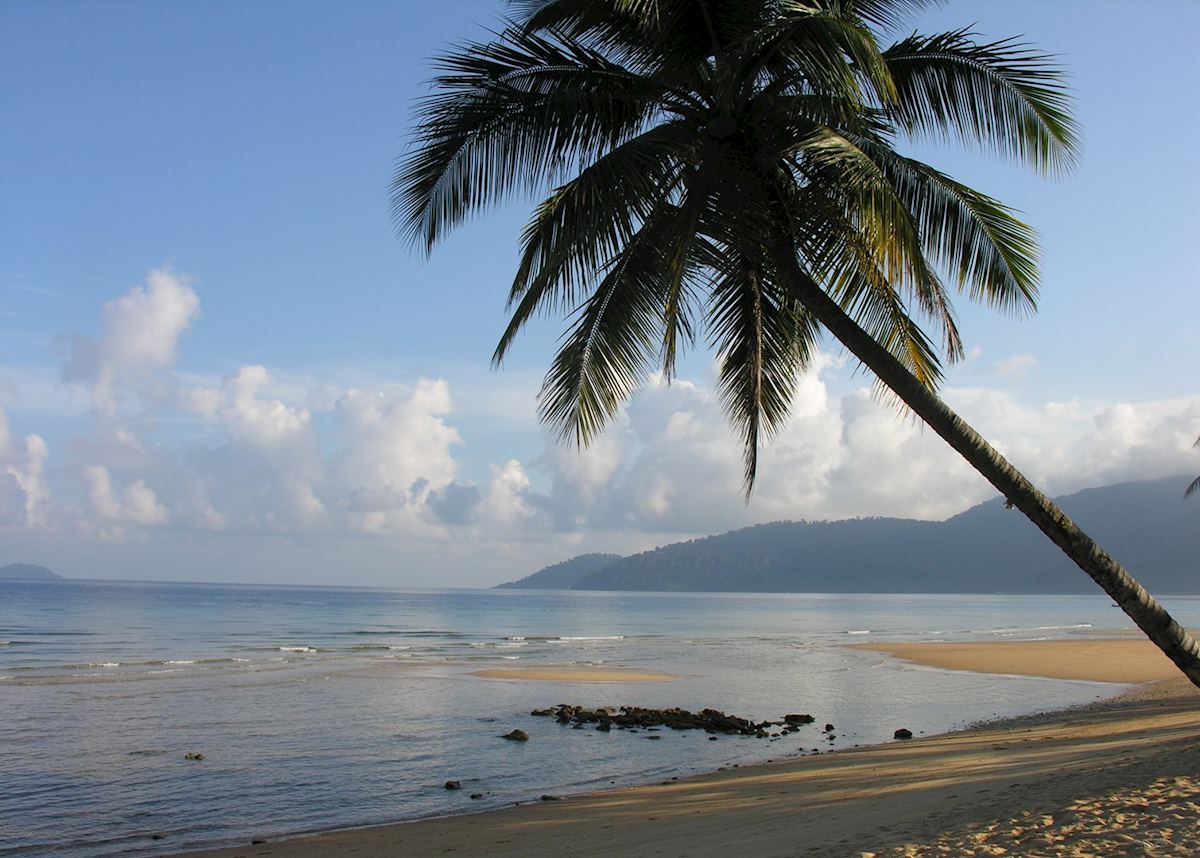 Tioman Island is remote, jungle-clad and rugged. There are no roads and only a handful of hotels. Getting there involves an early start as you journey three and a half hours by car from Malacca to catch the boat to the island (which takes 45 minutes).

It’s worth the effort. JapaMala has just 15 rooms and is set in its own bay. The only way you’ll see another hotel or other visitors is by taking a boat around the island. There's delightfully little to do other than sunbathe, swim, snorkel, and take the occasional jungle trek.

Set within Tioman Marine Park, you can make use of the dive school or join snorkeling trips for a chance to encounter turtles, reef sharks, whale sharks, and rays.

Unusually for Southeast Asia, Malaysia is a great place for a self-drive holiday. The driving distances aren’t too long, the roads and signage are very good, and aside from a few busy patches around the Cameron Highlands, there’s not much traffic. Also, a benefit if you’re British is that people drive on the left.

If you opt for self-drive, some particularly worthwhile stretches are the scenic coastal roads that connect the villages on the east coast. While the highway halves your travel time, following the coastal roads means you can stop off at any stretch of sand or road-side cafe that piques your interest.

Start planning your trip to Malaysia 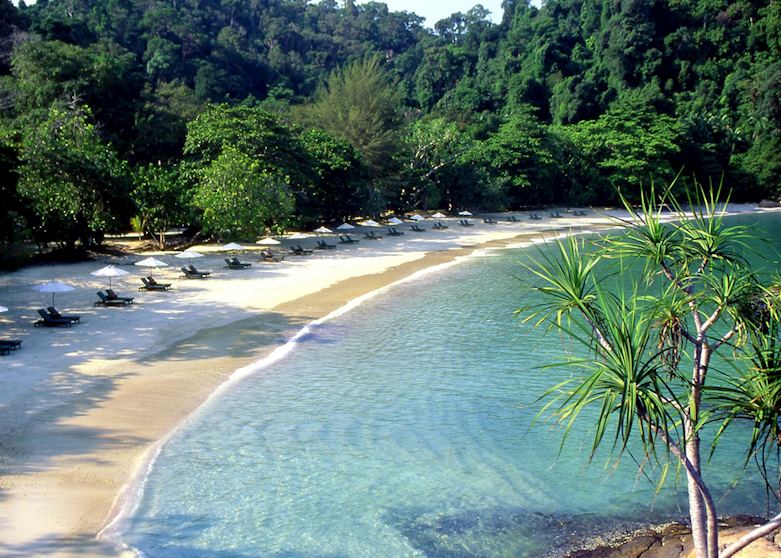 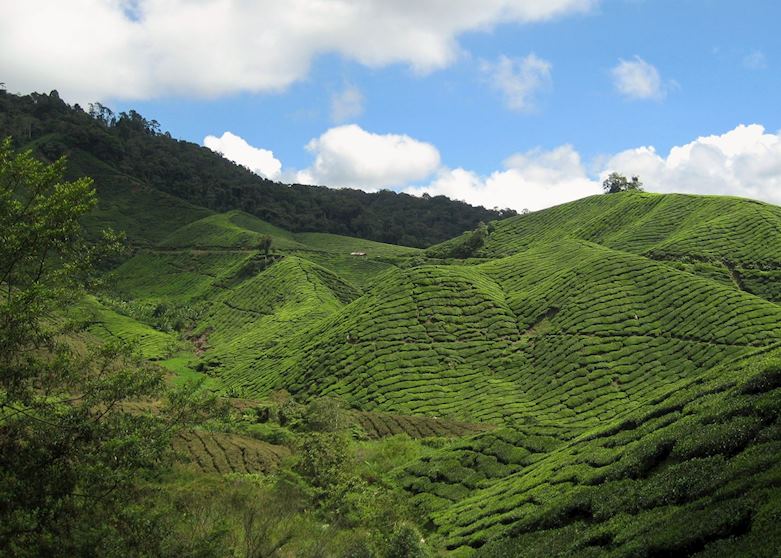 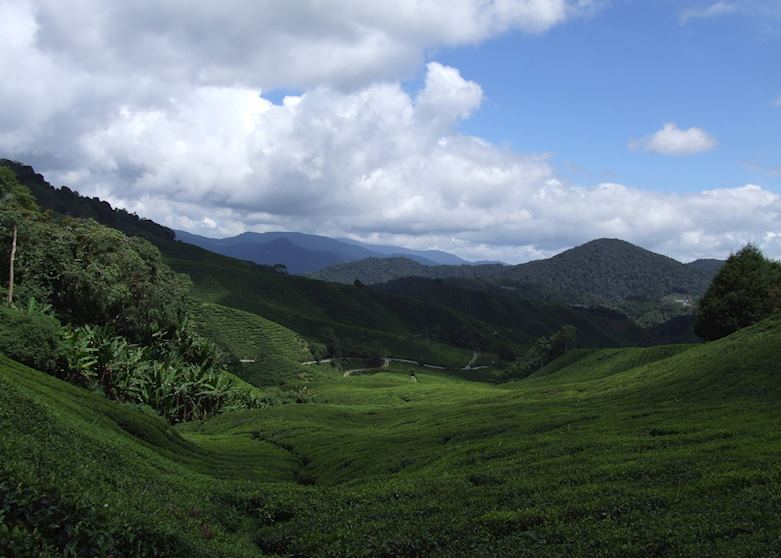