Aus is situated 120 kilometres east of Lüderitz on the B4 road which connects Lüderitz and Keetmanshoop.

The railway stops here because even though the line continues on to the coastal town of Lüderitz, sand blown onto the tracks makes it unsafe to use. 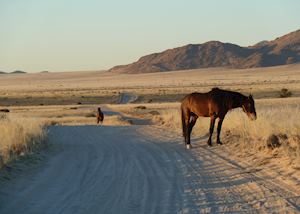 Aus is famous for its wild horses which roam freely in and out of the restricted diamond zone and can often be seen in the area. Nobody knows exactly where the wild horses originated from, but they are supposedly descendants of those from the German Schutztruppe. Another theory proposes their origins to lie in the former stud of Baron Hansheinrich von Wolf of the Farm Duwisib south of Maltahöhe. In any case seeing these wonderful animals against a backdrop of the Namib Desert is fascinating. The horses are most often seen at the Garub waterhole which is about 20 kilometres west of Aus and where a shady observation post has been erected.