Évora, the walled provincial capital, is a good base for exploring the region as well as a destination in its own right. The well-preserved city is a UNESCO World Heritage Site thanks to its Moorish alleyways, intact medieval walls, Roman ruins and Gothic cathedral. The city is also a cultural hub, with a lively student population and exceptional restaurants focused around the local cuisine. 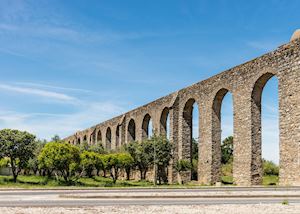