Views over active volcanoes, canoe rides to idyllic waterfalls, and a deep-dive into the Philippines’ military history, all in Southern Luzon.

The Philippines’ main island of Luzon is best-known for its capital, Manila. But, drive south through sugar plantations and tucked-away villages and you’ll also find a wild landscape of jungle-covered mountains, conical volcanoes, vast lakes, and tiny islands circled by sandy beaches and coral reefs.

Your time here can be spent out hiking among these diverse landscapes, canoeing and rafting along rivers, and taking in views over some of the country’s most active volcanoes. You could also visit the historic military sites that dot the strategically positioned Corregidor Island, or soak up laid-back Filipino culture with a stay at a rural coconut plantation.

Things to see and do in Southern Luzon 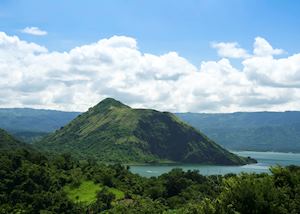 Rising from the middle of Lake Taal’s still, blue waters, this small but active volcano (you might even hear and feel it rumble) is surrounded by lush forest. When the volcano isn’t on high alert, you can follow trails around the lake’s black volcanic shores and take a boat trip onto the lake to climb the volcano’s slopes. However, at any time you can take in views of the volcanic island and surrounding waters from the town of Tagatay. Nearby, you can also spend a morning exploring the town of Taal with its 19th-century Spanish and American architecture, including a large Spanish basilica.

Not far away is Magdapio Falls, also known as Pagsanjan Falls or Cavinti Falls. You can reach this three-drop waterfall via a short hike from the town of Cavinti, or you could join a dugout canoe ride, paddling through the narrow Pagsanjan Gorge before reaching a natural pool below the cascade.

Two to three hours from Manila, this working coconut plantation was founded in the late-19th century and offers a glimpse into rural Filipino culture, whether you choose to stay overnight or visit for the day. You can paddle a traditional bamboo raft along the gentle river, head out on nature walks to spot resident bird species, and have lunch beside Labasin Falls, where tables are set up in the river shallows to keep you cool while you eat. 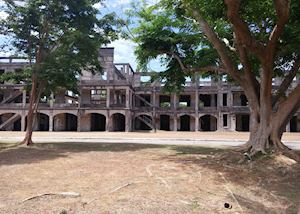 Situated at the entrance of Manila Bay, Corregidor Island’s strategic position led to it being used as a fortified defence over the years. You can still see the remains of coastal artillery batteries dotting the island’s coast from when it was used to protect the bay and the city itself from warship attacks.

You can spend a day visiting the island, which is reached via ferry from Manila. In 1941, it became the last bastion of American resistance during the Japanese invasion of Luzon, and you can pay a visit to the former headquarters of US General MacArthur. You’ll also see mile-long barracks, gun battalions, and the Malinta Tunnel, which was first used as a bomb-proof storage bunker and later became a hospital. You might also like to visit the Spanish lighthouse, from where you can admire sweeping views over Manila Bay.

The Philippines experiences comfortably warm temperatures and dry conditions between December and February, though tropical storms have been known to occur at this time. While it remains dry in March and April, it does get quite hot. Late May to October is classed as the wet season, but the rain isn’t constant so you can still make the most of hot, sunny days along with fewer crowds and lush scenery.

Our itineraries will give you suggestions for what is possible when you travel in Southern Luzon, and they showcase routes we know work particularly well. Treat them as inspiration, because your trip will be created uniquely by one of our specialists.

We’ve selected a range of accommodation options for when you visit Southern Luzon. Our choices usually come recommended for their character, facilities and service or location. Our specialists always aim to suggest properties that match your preferences.

Our specialists seek out authentic ways to get to know the places that could feature in your trip. These activities reflect some of the experiences they've most enjoyed while visiting Southern Luzon, and which use the best local guides.