Located in the southern sector of Queen Elizabeth National Park, the beautiful Ishasha Plains are little visited by tourists, which makes it all the more rewarding for a game-drive or two. 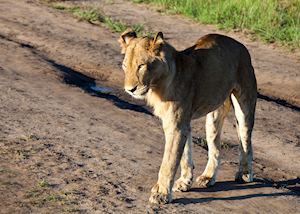 Famous for its tree-climbing lion, which lounge in the low boughs of the fig trees — a habit which researchers believe is due to the need to see above the long grasses in the dry season to spot their prey, and also to avoid biting insects. Other wildlife you can hope to see in this region include buffalo, zebra, elephant, Ugandan kob and hippo in the Ishasha River.

Birdwatchers can keep an eye out for the compact weaver, black coucal and other water-birds like herons and storks near the Lake Edward marshlands, too.

Our itineraries will give you suggestions for what is possible when you travel in Ishasha, and they showcase routes we know work particularly well. Treat them as inspiration, because your trip will be created uniquely by one of our specialists.

We’ve selected a range of accommodation options for when you visit Ishasha. Our choices usually come recommended for their character, facilities and service or location. Our specialists always aim to suggest properties that match your preferences.