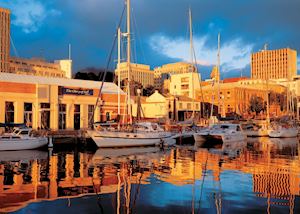 Also worth including are the views from Mount Wellington, the serene parkland of the ‘Queen’s Domain’ and the harborfront heritage area of the Henry Jones Jam Factory, established by its rags-to-riches namesake, who was, at one point, the largest private employer in the Southern Hemisphere.

Hobart offers so much to see within its own boundaries, but it is also a marvelous base from which to explore the surrounding area’s diverse attractions, whether taking wildlife cruises or guided convict tours.

Our expert guides to exploring Hobart

Written by our specialists from their own experiences of visiting Hobart, these guides will help you make the most of your time there. We share both our practical recommendations and the best ways to appreciate Hobart at its best.