Shops, cafés and galleries line the narrow, winding streets, a Gothic cathedral graces a central square, and Como's leading figures are commemorated in lavish monuments. With good ferry links to the rest of the lake and a funicular up into the hills, Como proves a versatile base for a visit to the region.

Behind the grand hotels, cafés and gelaterias that jostle for space along the waterfront is the medieval heart of the city, an area of narrow, arcaded lanes, sturdy tower houses and sun-drenched piazzas. 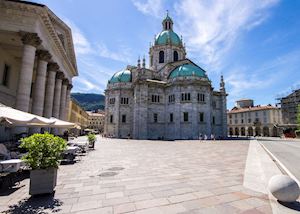 A statue of Volta sits in the main square, and you can learn more about his work and see some of his equipment at the Tempio Voltiano, a museum set in a neoclassical building on the waterfront. Nearby is a sculpture by Daniel Libeskind dedicated to Volta.

Our expert guides to exploring Como

Written by our specialists from their own experiences of visiting Como, these guides will help you make the most of your time there. We share both our practical recommendations and the best ways to appreciate Como at its best.