A living testament to Italy’s medieval past, Siena is Italy’s best preserved medieval city, a UNESCO World Heritage Site and a wonderful showcase of Gothic architecture. Its incredible preservation owes much to historical circumstance and its loss of wealth, power and influence to arch-rival Florence following the city's devastation by the Black Death in 1348. Siena's abrupt decline halted further development and unlike many of Italy’s other historical cities, it escaped the blight of large scale development projects and retains a magical atmosphere that continues to enchant to this day. Easily reached from Florence, it makes a rewarding day trip from the Eternal City.

Sometimes overshadowed by Florence, Siena has its own charms. For example, the Piazza del Campo is the setting for the biannual Palio, but it’s also where locals come to relax and eat their picnic lunch.

What to see and do in Siena

One of the finest churches in Italy, Siena's duomo (cathedral) was meant to rival that of nearby Florence, but its intricately decorated interiors surpass it in every way. Siena was Italy’s most important pre-Medici banking hub and wealthy medieval merchants poured money into the project. The intricate floor mosaics, elaborate sculptures and vivid frescoes were completed by the leading artists of the day: the pulpit by Pisano, sculptures by Donatello and a cornucopia of significant works by other medieval artists. Plans to build an even more elaborate cathedral were never completed but you can get the most staggering views from the top of the Facciatone, the unfinished façade of the new building.

Perched across three hills, Siena’s historic core is linked by a trio of thoroughfares that intersect at the stunning red-bricked Piazza del Campo. Il Campo, as it is known locally, is often described as Italy’s most captivating square and was built on the site of a Roman marketplace. On its lower side is the imposing Palazzo Pubblico (town hall) with its towering Torre del Mangia from where you'll get a far-reaching view over the city. Today, the square still acts as a meeting place and its many cafés are a great place to sit and just watch the world go by. 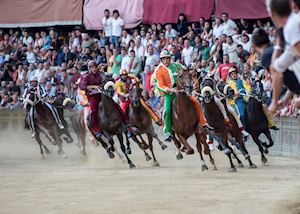 Each year the Piazza del Campo plays host to the historic Siena Palio, a bareback horse race between the city’s rival contrade (districts). The race dates back to the 17th century and each contrade has its own symbols, traditions and costumes making it a glorious spectacle for the thousands of people who come to watch. The event takes place twice a year on July 2 and August 16, and the ten riders parade around the square in their costumes before racing three exhilarating laps around a specially-constructed dirt track. It's an electrifying event, keenly awaited by local people so book well in advance.

Our itineraries will give you suggestions for what is possible when you travel in Siena, and they showcase routes we know work particularly well. Treat them as inspiration, because your trip will be created uniquely by one of our specialists.

Our expert guides to exploring Siena

Written by our specialists from their own experiences of visiting Siena, these guides will help you make the most of your time there. We share both our practical recommendations and the best ways to appreciate Siena at its best.

We’ve selected a range of accommodation options for when you visit Siena. Our choices usually come recommended for their character, facilities and service or location. Our specialists always aim to suggest properties that match your preferences.