This barren, landlocked country, for so long invisible to Western eyes, contains within its borders three of Central Asia’s most brilliant cities: Samarkand, Bukhara and Khiva.

There’s natural beauty too, with the verdant Ferghana Valley (home to fine silk) and the parched basin of the Aral Sea far to the west.

There are a half dozen functional languages in Uzbekistan, the most useful being Russian. The "national" tongue is, in theory, Uzbek, though there are large minorities in the country who speak their own languages from day to day: Tajik and Kazakh are the most salient examples. Knowing a few words of Russian can be extremely helpful.

Uzbekistan does not have a national cuisine, though your guide may say otherwise. Its principal dishes are an amalgamation of Tajik, Mongol and Russian influences. You may spot what looks like an occasional Turkish touch as well, though the influence is historically in the other direction, from East to West.

The most famous main dish is Shashlyk (mutton or chicken barbecued on a skewer and served with naan bread). Plov, a mixture of rice, mutton and vegetables, is a staple of Samarkand and Bukhara. For vegetarians the choice is limited to Russian food, which has a surprising number of vegetable dishes, including some excellent salads.

The most famous, or infamous, drink in Central Asia is Vodka. It is, of course, of a high quality, but it is possibly best avoided! Otherwise there are a few local beers — the best is the Russian brand Baltika.

In general tipping is not expected, however, in the larger international hotels in Tashkent and Samarkand Western-style tipping is the norm. For guides and drivers in Central Asia tipping is a part of their salary and, though not compulsory, tipping is an excellent way to show your appreciation of their services.

The currency of Uzbekistan is the Cym (pronounced "soom" — with "oo" as in "book"), though dollars are generally much more useful for purchases in hotels or shops. It is almost impossible to obtain Uzbek money outside of Uzbekistan. The best option for changing money is to do so as and when required through your guide who will usually help you to change money with local money changers — effectively the black market. ATMs are one option in Tashkent. Credit cards can be used in major hotels and it is also possible to get a cash advance on them through the National Bank of Uzbekistan.

Dressing conservatively is always wise in mosques or places associated with saints or nationally revered people. Uzbekistan used to be an integral part of the Soviet Union, and as such was under the wing of the KGB. Evidence of this can still be seen when trying to take photos of people or of what might be regarded as "state security assets" — your guide should notify you of where these are. The most famous such "asset" is the Tashkent Metro.

When to go to Uzbekistan

You'll find temperature and rainfall information, together with a month-by-month guide on visiting, on our guide for when to go to Uzbekistan. 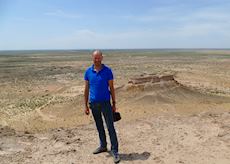