Because it sits at the border between the Caribbean and the Atlantic, Barbados is unlike any other island nearby. Its west coast offers the white-gold sand beaches and calm turquoise waters you’d expect, but the interior is all farms and the less-developed east coast is windy and wild, dotted with enormous boulders washed up by the Atlantic rollers.

Thanks to this diversity, and a still-visible colonial history, you could easily spend ten nights on Barbados and still have plenty to do and see.

The place to be on a Friday night, Oistins is a small fishing village on Barbados’s southwest coast. Every Friday night — and, to a lesser degree, Saturday night — the local fishermen set up a whole series of booths to sell their catch along a stretch between the beach and the main road.

The booths are no-frills affairs, fronted by communal picnic tables that spread out under makeshift awnings or simply out in the open under the late-afternoon sunshine. I suggest arriving early to get a seat at one of the tables. Most Fridays, the scene is packed with an even mix of visitors and locals, who all cram into together, shoulder to shoulder, to eat.

The menu mostly features the catch of the day, served fried and piping hot. Mahi mahi is usually available but, otherwise, it depends on the season, and you might find yourself enjoying barracuda or flying fish. You can also order one of a limited number of sides, usually salads and macaroni pie — a local variation on macaroni and cheese that can be easily sliced. And, of course, you can have rum.

As the sun goes down, the steel drums start to ring out and the whole village develops a laid-back party atmosphere.

Local tradition suggests that rum was invented on Barbados, probably by enslaved plantation workers who discovered that molasses would ferment and create alcohol. Given that heritage, it’s not surprising that the oldest rum distillery in the world is here — the island’s own Mount Gay Rum Distillery was established (as all their bottles say) in 1703. You can take a tour of the facilities in Bridgetown, on the west coast.

You’ll begin with a short movie introduction to both the process and the history of making rum in Barbados. There’s also a mini museum that features items from the company’s three centuries, including vintage bottles.

Your visit can also involve a rum tasting. You take your place with other visitors at a long, gleaming wood bar, where flights of rums are lined up to sample. The tasting process is much the same as for wine or whisky and begins with a gentle sniff to take in the rum’s bouquet, before a first anticipatory sip. Then a slow swallow to let the amber liquid roll around in your mouth, so you can pick out the complex tasting notes.

It was easy to detect differences between the different types of rum. The light amber Eclipse, for instance, had a slight smokiness that was balanced by a floral, fruity nose, while the darker XO was bolder with notes of vanilla and warm spice.

If you go for the earlier tour, you can stay for lunch on the patio. The traditional Bajan menu features more elaborate versions of what you’ll eat in Oistins: grilled or fried fish with lots of salads and macaroni pie on the side, plus local fresh fruit for dessert.

Most people choose to stay on the west coast of the island, for obvious reasons. But I also love the rugged pleasures of the Atlantic coast — dotted erratically with boulders and lashed by crashing waves, it’s wilder than the calm and manicured western shore. It’s also quieter, and you can explore the area on a guided driving tour.

The tour starts at Holetown, one of the first places the British landed at long ago. Filled with elegant restaurants and luxury-brand shopping, this is where you go to see and be seen on Barbados. Not being much of a shopper, I usually bypass Holetown for Speightstown. The balconied buildings are past their prime, but you can wander through town and glimpse its former grandeur in the graciously dilapidated facades.

From there, your driver will take you across the island to Saint Nicholas Abbey. This lovingly restored Jacobean mansion is one of the oldest plantation houses in the Caribbean, and a visit gives you a glimpse into Barbados’s turbulent history.

The house itself, known as the Great House, is much smaller than the name suggests and only two rooms deep. But, it’s an elegant gem tucked amid the island greenery, which gives you a rare chance to see one of the last surviving examples of Jacobean Caribbean architecture. Built in 1658, it boasts three arabesque gables on the front, as well as Tudor-style arches and ornamental chimneys.

Tours are often conducted by the current owners and include a trip next door to the distillery, where rum is still produced much as it has been for centuries. A sturdy stone building, with red doors and a red ceiling, it’s filled with gleaming copper piping, and a combination pot and still that shares my name, albeit with a different spelling: Annabelle.

You can indulge in a rum tasting back inside the great house. I tried both the white and dark rum. The white rum had notes of marshmallows and tropical fruit — a bracing tipple. I preferred the smoother caramel notes of the dark rum, which had a silky finish thanks to its years in an oak barrel. The very best 18-year-old spirits aren’t available for sampling but are for sale.

After your tour of the abbey, I’d take a few moments to walk up nearby Cherry Tree Hill. It’s a lovely walk that rewards you with sweeping views of the coast.

Cascades of bright-pink flowers sway in the island breeze. Small, shy-faced lavender orchids bob amid a welter of enormous leaves. Spikes of heliconia — with their strangely shaped flowers, like a row of lobster claws — bobble and weave alongside the path. A tiny lizard darts into the shelter of a thicket of delicate ferns.

These are just a few of the blooms you’ll see at the Andromeda Botanic Gardens, the finest garden of its sort in the Caribbean. It represents the life’s work of Iris Bannochie, an award-winning horticulturalist, who bequeathed it to the Barbados National Trust in 1988. Since then, it has served as a pleasure and learning garden, as well as one of the loveliest places on the island.

Though it’s not massive by any means, the path meanders pleasantly — each curve presents you with a new scene and each hill seems to reveal a new vista. One of the best, in my opinion, leaves you with a view of the distant beach, framed by trees.

You can while away most of an afternoon here, lost amid the towering palms or contemplating the way that the breeze moves the white water lily blossoms on the pond. You’re also likely to be one of just a few visitors.

You won’t just see native flora — Bannochie was a great collector and there are plants from across the tropical and subtropical zones. As you might imagine, the garden overflows with wildlife, including hummingbirds, herons and monkeys.

I suggest visiting in the afternoon. Although the garden officially closes at 4:30pm, you can stay as long as you like, and monkeys and birds become more active as the day draws to a close.

Where to stay on Barbados

Barbados is one of the most established islands in the Caribbean, and you’ll find indulgent hotels with attentive service. That’s especially true of the west coast, though the one I like best is the Sandpiper.

This is a classic beach hotel, right in the heart of Holetown. You’re just a short walk to shops and restaurants, but the hotel is surrounded by well-manicured gardens and still manages to feel utterly secluded. The private beach is a gently sloping crescent of golden-white sand that curves around a tiny bay of placid turquoise water.

For something a little different, I highly rate the Atlantis Historic Inn on the Atlantic coast. Built in the 1880s as a railway hotel, it retains its Victorian charm with shutters over the windows and four-poster beds. There are just a handful of rooms, giving the property a quiet, intimate atmosphere that’s well matched with the less-crowded locale.

If you stay here, look for the windswept path from the hotel along the coast down to the beach at the village of Bathsheba.

As the Caribbean's easternmost island, Barbados acts as a gateway to the archipelago and combines well with many other islands, such as Antigua, sleepy Bequia or one of the private islets in the Grenadines.

Start planning your trip to Barbados 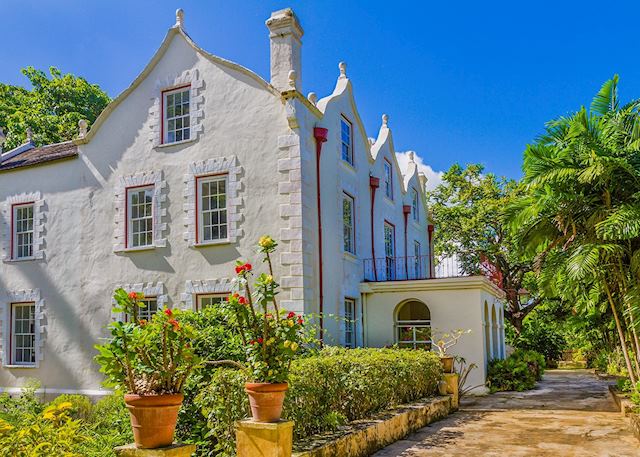