As the propellers rotated and the engine roared, I was caught somewhere between excitement and anticipation as the small plane took off from Adelaide airport, destination Kangaroo Island. The island itself is a 30 minute flight south from Adelaide, or less than two-and-a-half hours by car and ferry, and had been sold to me by many in South Australia as one of the natural wonders of the country. 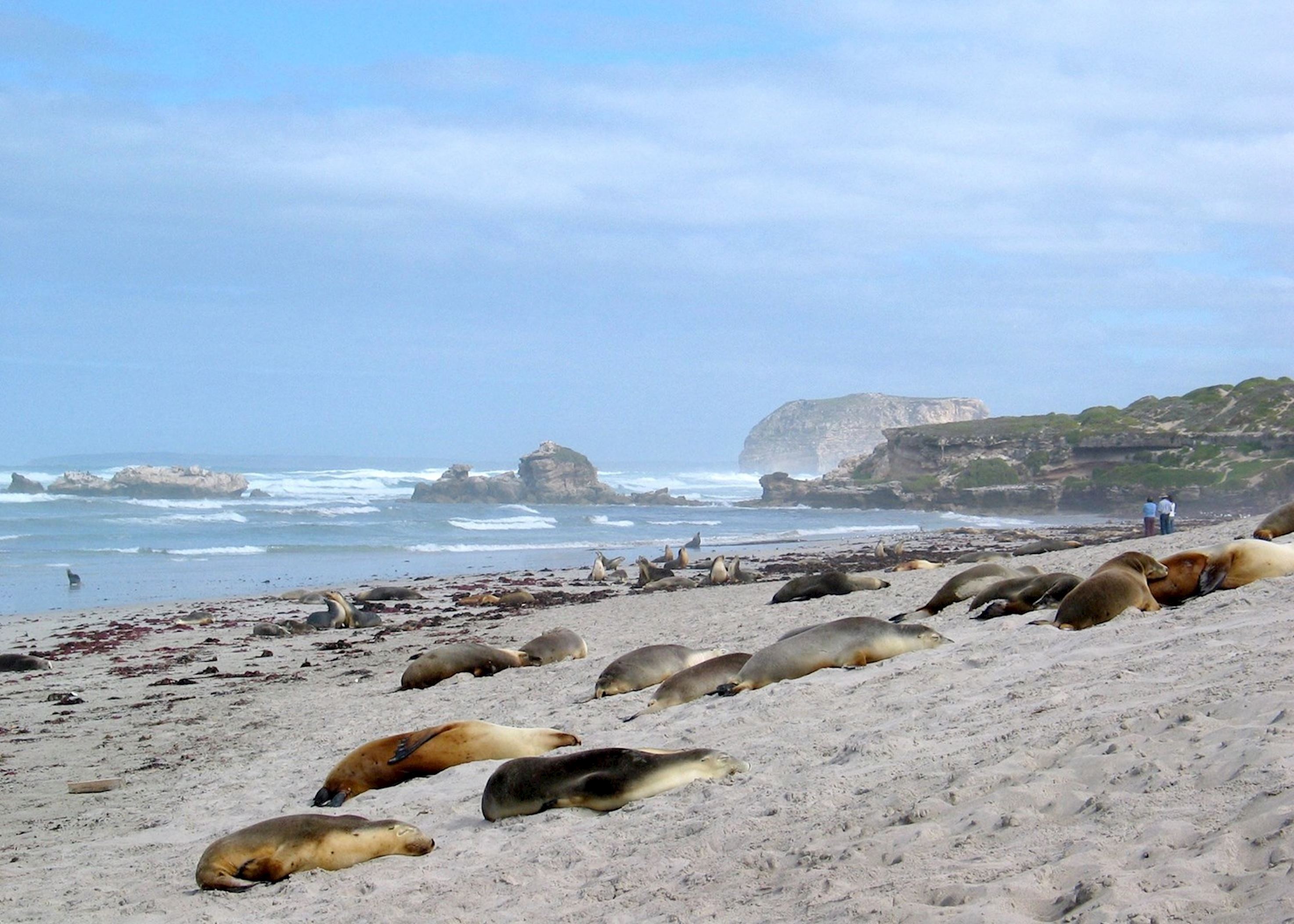 I was to embark on two full days of touring and, over the next 48 hours, I realised that the guides were truly exceptional, earning their title with their broad knowledge of the flora and fauna of the island as well as their anecdotes about local life. My favourite being of the kangaroo which 'adopted' an island family as its own after its mother had left it on the night of its birth, presumably believing it would not survive the night. 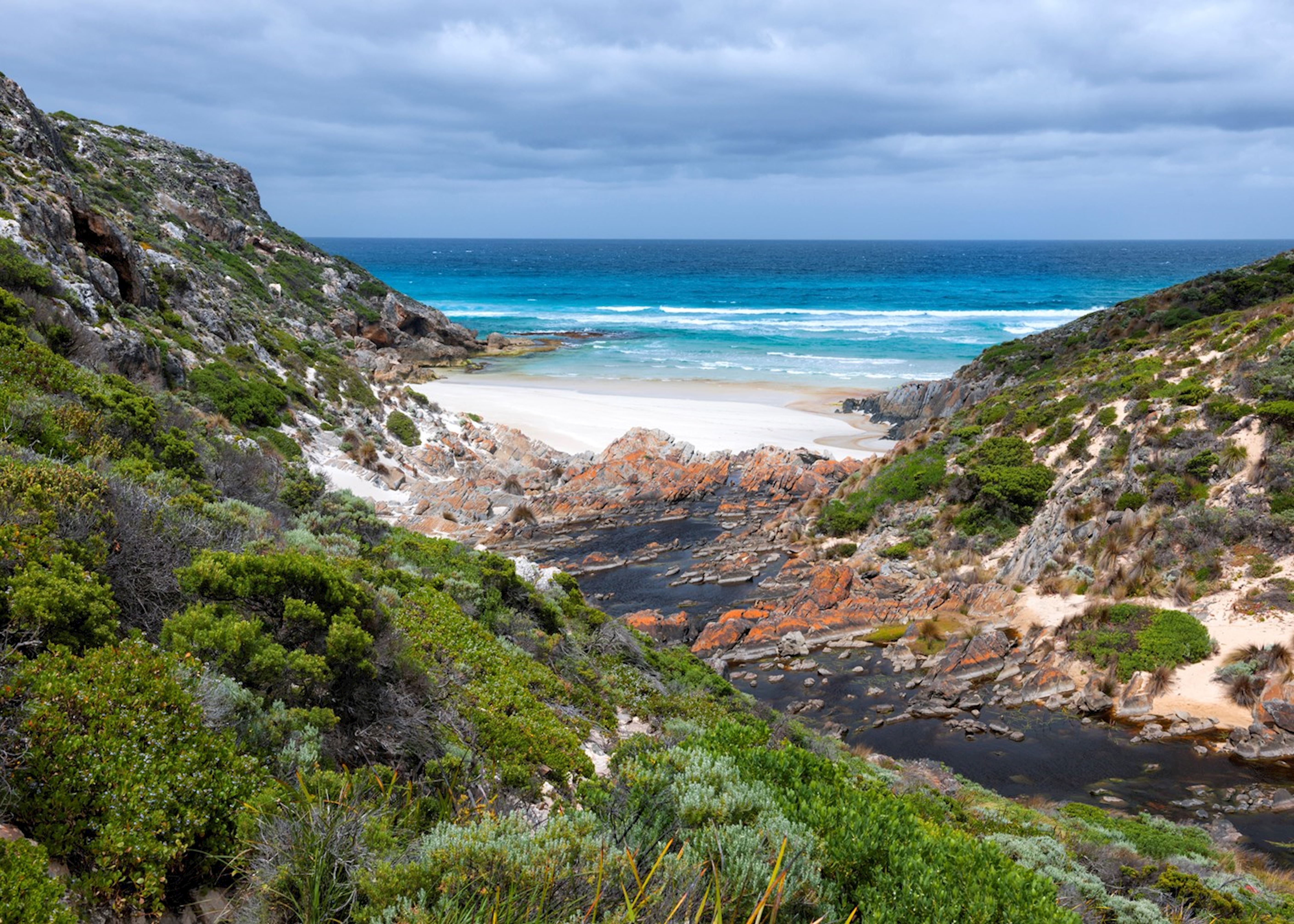 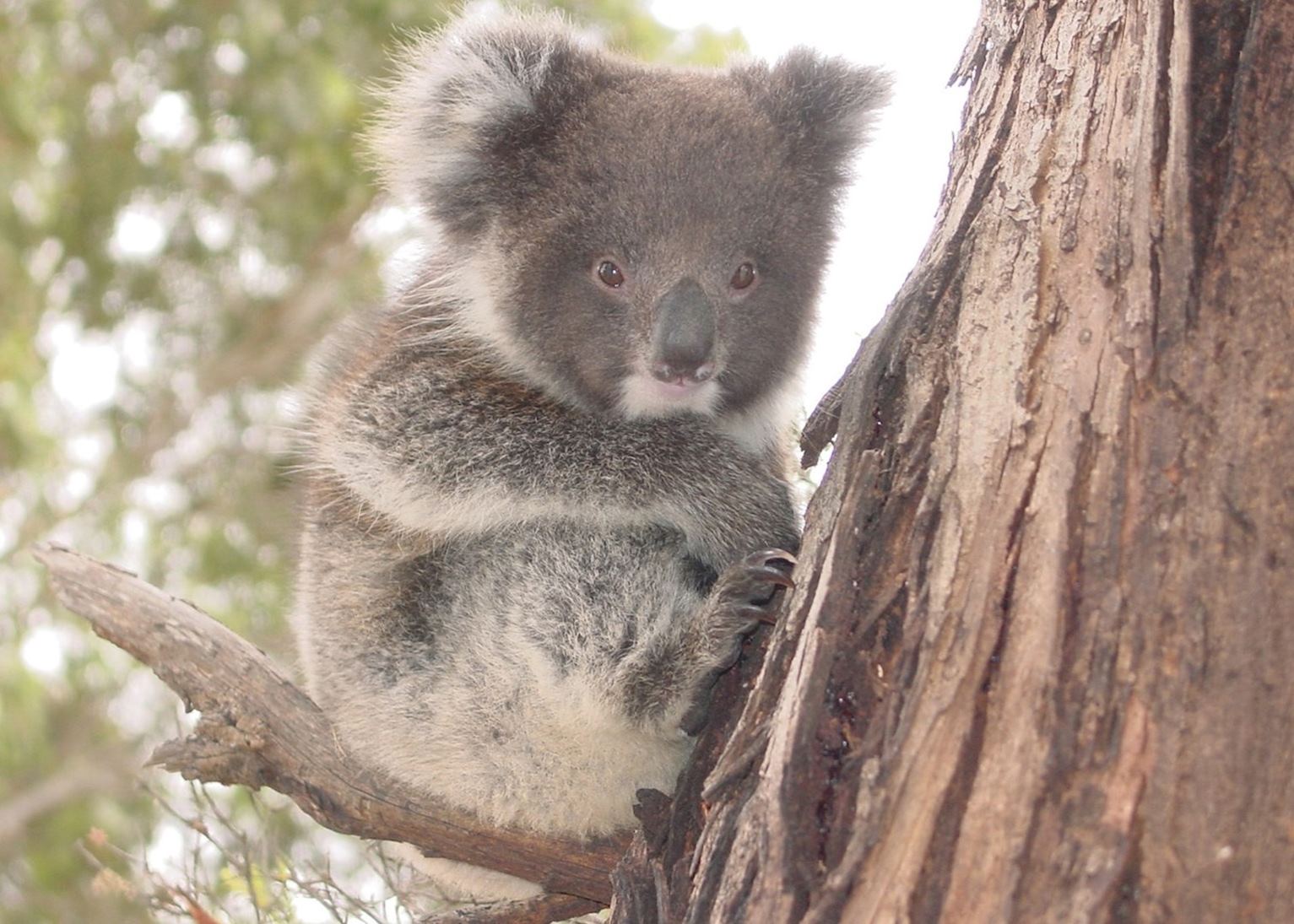 After an hour or so of 'koala spotting' it was time to make our way to our respective homes for the night and our guide happily dropped each of us off at our properties. There are many choices of accommodation, the most impressive being the newly opened 21-roomed Southern Ocean Lodge. Set on the cliff tops overlooking Hanson Bay, the lodge offers a perfect base from which to explore the island and, after a day spotting a variety of wildlife, it provides a perfect base to relax, unwind and watch the surf tumble in from the Southern Ocean. This is not the only place to stay, with many cosy homesteads, character properties and small boutique accommodation choices, all with their respective merits and we’ll happily advise you on these. 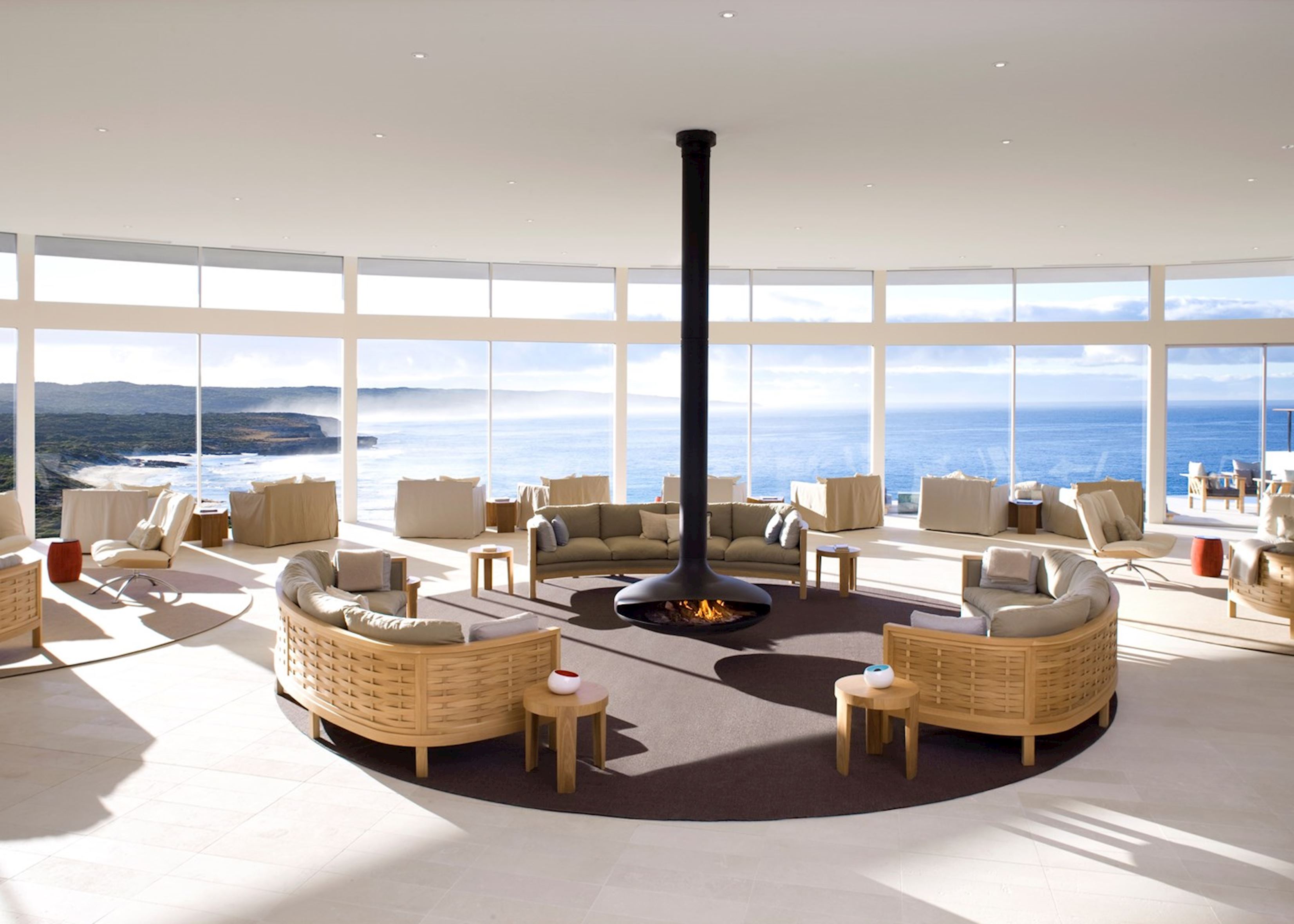 The following day I was up early to meet my guide who picked me up along with the rest of the group and a few newcomers. We set off to the west of the island, first stop Flinders Chase National Park. Here I marvelled at the Remarkable Rocks which live up to their name — a huge cluster of weather-sculptured boulders perched on a large granite dome that drops 75 m (246 ft) to the sea. 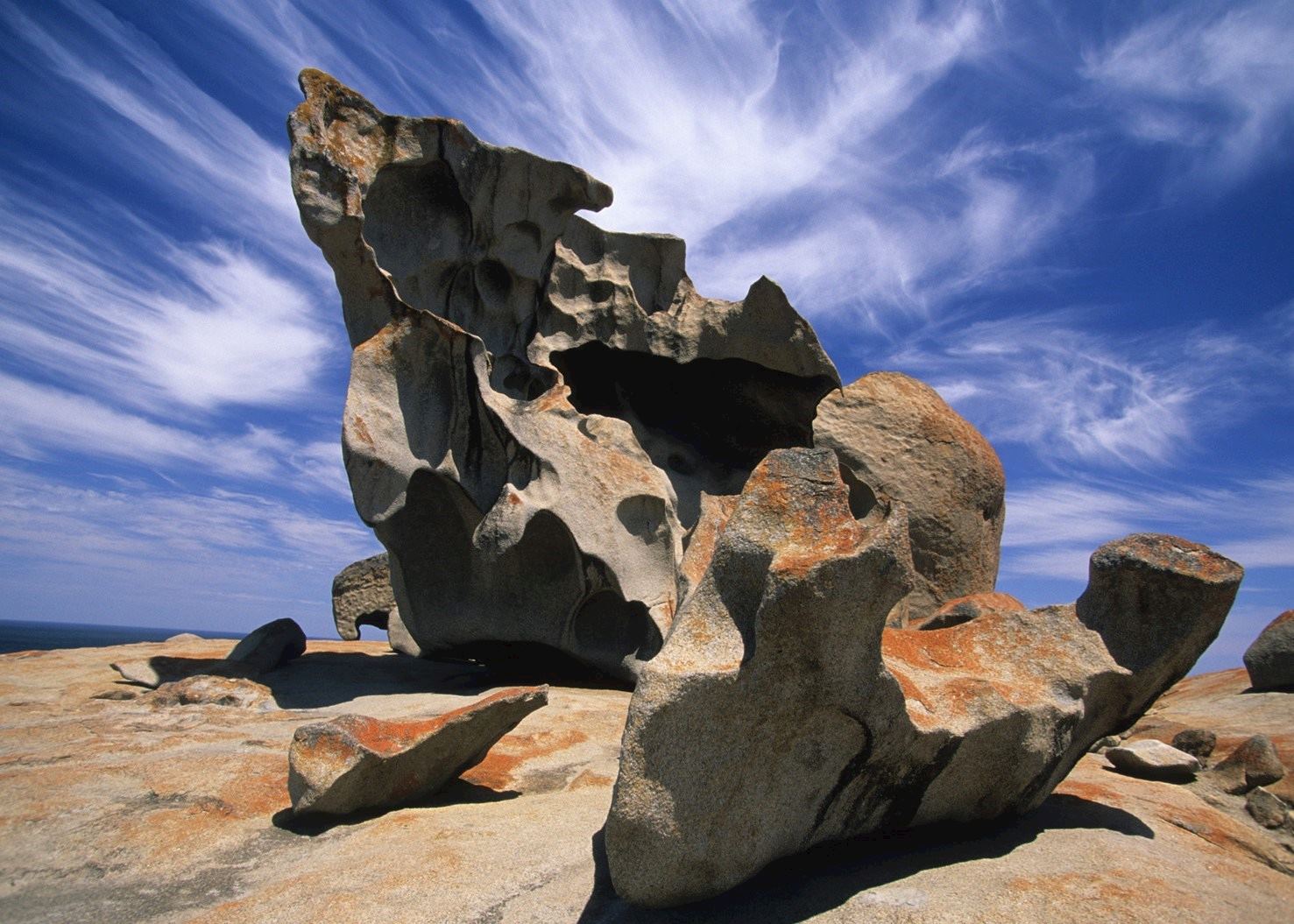 After our morning here, we were treated to a fantastic barbecue, prepared and cooked by our guide, and set up in a quiet corner of the Park. What I hadn’t been told is that whilst on Kangaroo Island you can also take your taste buds on tour through the ever-increasing range of gourmet produce, from sheep milk cheeses at the Island Pure Sheep Dairy to tasty Ligurian honey and olive oil. You can savour a freshwater crayfish at Andermel Marron near Vivonne Bay or maybe sample the boutique wines of this young wine region at the Sunset Winery Cellar Door or Dudley Wines beside Cape Willoughby Lighthouse.

If I had been staying for longer, I would have grabbed a copy of the Kangaroo Island Food and Wine Guide and endeavoured to eat my way across the island! Sadly, after a peaceful guided kangaroo spotting walk through the bush, it was time to drive back to Kingscote Airport for my flight back to Adelaide.

Having travelled extensively in this ever-changing country, Kangaroo Island is a truly Australian experience. It offers you your own slice of island paradise — boasting rugged coastline, white sandy beaches, crystal clear waters and unspoilt scenery. The best part for me was the fact that it is still relatively unknown and I felt that I had experienced a part of Australia which few have yet discovered but many are sure to love in the coming years.