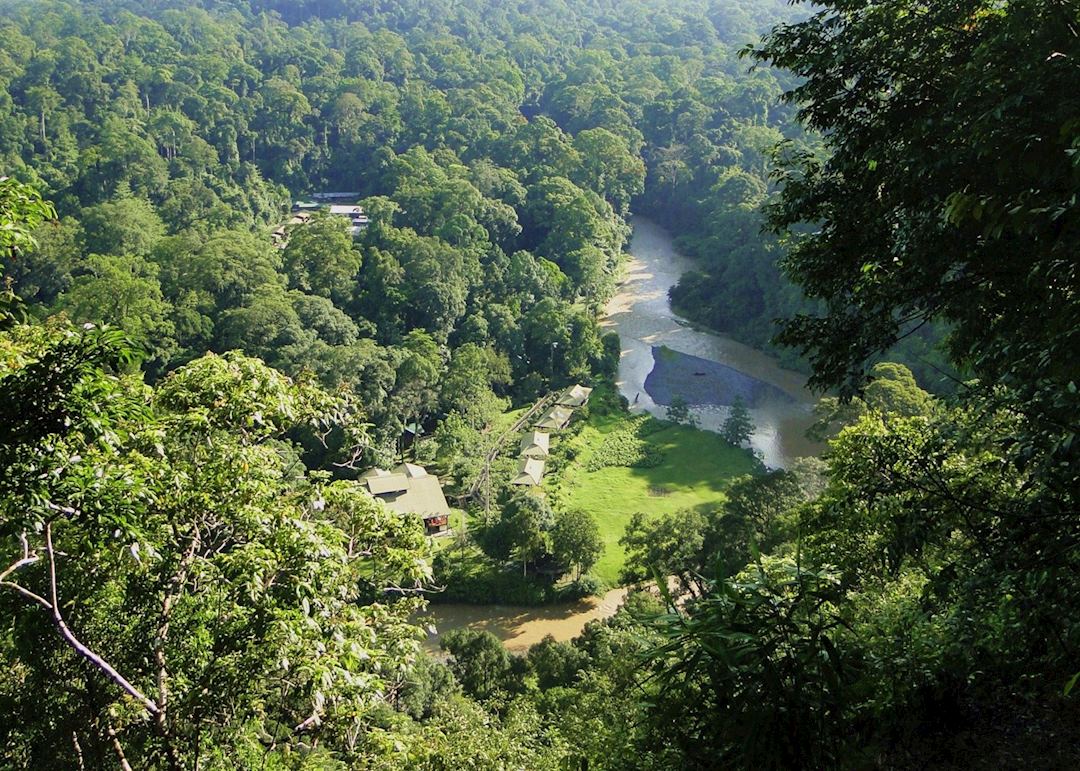 Diary from the Borneo Rainforest Lodge

Borneo Rainforest Lodge from the air

Alarm at 5:30 again. No rain, but still cool first thing. Leech socked and loaded, we’re ready to rumble in the jungle!

A handles canopy walkways well, if not with actual pleasure. Happy to observe from tree platforms which are nice and solid.

Spot some rather fabulous spiders, more leeches, giant ants… Borneo is not a good place if you don’t like creepy-crawlies.

Few birds in the trees, not really good birdspotting session but monkeys do good job of bird imitation leaping from tree to tree above our heads.

A gets eaten by leech! Thinks at first an insect has stung her on the back of her hand, but bleeding doesn’t stop, sign of leech anticoagulant.

Red trogon, excellent bird, indeed rather red, makes a showing. Similarly bright red flowers with black spot in middle are not a flower but a kind of open seed pod. Most shiny, and A very taken. On return, take loop route back to room, see blue-eared kingfisher in tree.

Afternoon, have quiet time sitting in tub on verandah.

Late afternoon/early evening walk along by river. Various nocturnal things to be seen – Guide Fred finds us a tarsier! Cicadas incredibly noisy, back in factory full of machinery again. Lots of good frogs in frog pond.

Don’t take camera to dinner, so naturally a python chooses tonight to invade the dining area.

As it’s New Year’s Eve, we all party until midnight. Ok, not that last bit. Go to bed, look at some photos, asleep by 9pm.

Happy New Year! No pre-breakfast activity today, so set alarm for 6am. S would prefer later but A wants to see sunrise. Of course, thick mist prevents any hint of dawn colour, so S has bit of lie-in.

Another shiny black squirrel on the way to breakfast.

Longest walk today, to waterfalls and viewpoint on cliff above river.

We finally get to see some gibbons after hearing them so much. They sound more like birds than monkeys, birds pretending to be alien spaceships preparing to take off. "Gibbon crew, doors to automatic".

S slips climbing steep muddy slope. Gets self and camera a bit dirty but no harm done. A using pair of sticks to help balance, seems to be working for her.

Serpent Falls and Fairy Falls both well worth seeing. Not Niagara/Victoria/Gullfoss kind of thing, but very scenic. Final section to viewpoint is along the spine of an amazingly steep ridge. It’s an all but vertical drop on one side and not much less on the other. It’s called “Coffin Cliff” because of centuries-old tribal burial site, but it’s not hard to imagine more contemporary mortality if you were to take a wrong turn. While we’re milling around, a big rhinoceros hornbill takes up residence in a tree only just above our heads. Click, click, click! He’s hungry, and spends a good long while eating figs and posing for us. Going down a bit, we visit the burial site and see the holes carved into the cliff and the remains of the chief’s coffin. Seems that it was the tradition to carve your own coffin from ironwood – Berlian as it’s called locally – with some sort of characteristic motif, usually an animal. Our chief’s had the head and tail of a turtle. There are a few bones and remnants of grave goods too. Further down, the “natural Jacuzzi”. You need to accept some artistic licence in the name, but it’s a small pool fed by a waterfall where one can have a cooling swim. Very cooling. One can also be eaten by fish – a very strange and not entirely enjoyable sensation.

Argh! S has been eaten by leech too, on left buttock. Not sure when or how; did notice slight sting earlier, thought insect, brushed trousers, felt nothing. Blood seems mostly on inside of trousers absorbed by mesh pocket, not soaked through to outside. Could leech have got inside when changing or left trousers on table at jacuzzi pool?

We’re pondering a G&T at the bar when the heavens open. It’s been dry all day, and very sunny for most of the time, so I guess it was time for a change. However, it soon starts to ease off; could be just a heavy shower. Ah, well, it could have been just a heavy shower, but it’s actually just a heavy deluge that occasionally takes a brief rest.

8:30 meet Fred and agree abandoning night drive. Briefly show him tarsier pictures from last night, then return to bar for another glass of wine. Even roof leaking in places, insects and birds take shelter in bar too!

Another lull and we head back, to find that muddy shoes which had dried in the sun are now soaked again, even though under some cover.

Leaving today, 10am. Fill in a few appraisal forms, pay bill, ready to go. Then Henry (it says on his name badge; he must be important because antenna on his walkie-talkie almost as big as rainforest tree) tells us of slight complication with return journey. Landslide due to rain has destroyed part of road; we will take car halfway then have to get out and walk to other car on other side of landslide. Says it won’t delay us, no problem.

Say goodbye to Fred and off we go.

Big monitor lizard – maybe 1m nose to tail? – scurries across road in front of us, too quick to photograph.

Erk? Tree in road! Not that big, but too big to drive over or through. Now what? Answer: little man jumps out of car behind with parang and starts hacking. Before long road magically clear and we resume.

We’re driving through elephant country, as clearly seen from elephant deposits. Our driver is obviously keeping an eye out, but all we see is piles of dung. Then we spot one! Just crossing the road ahead of us. Get a good clear view of him for a few moments, then he’s off in the bush and invisible though only a few yards away.

Seek but find no more; he seems like the last of the group.

You can read more from Amanda and Steve Rencontre's diary by downloading the following PDF, called Borneo and Pangkor Laut 2010-11 (12.1MB).

You can also see some of the Rencontre's photographs from their trip. 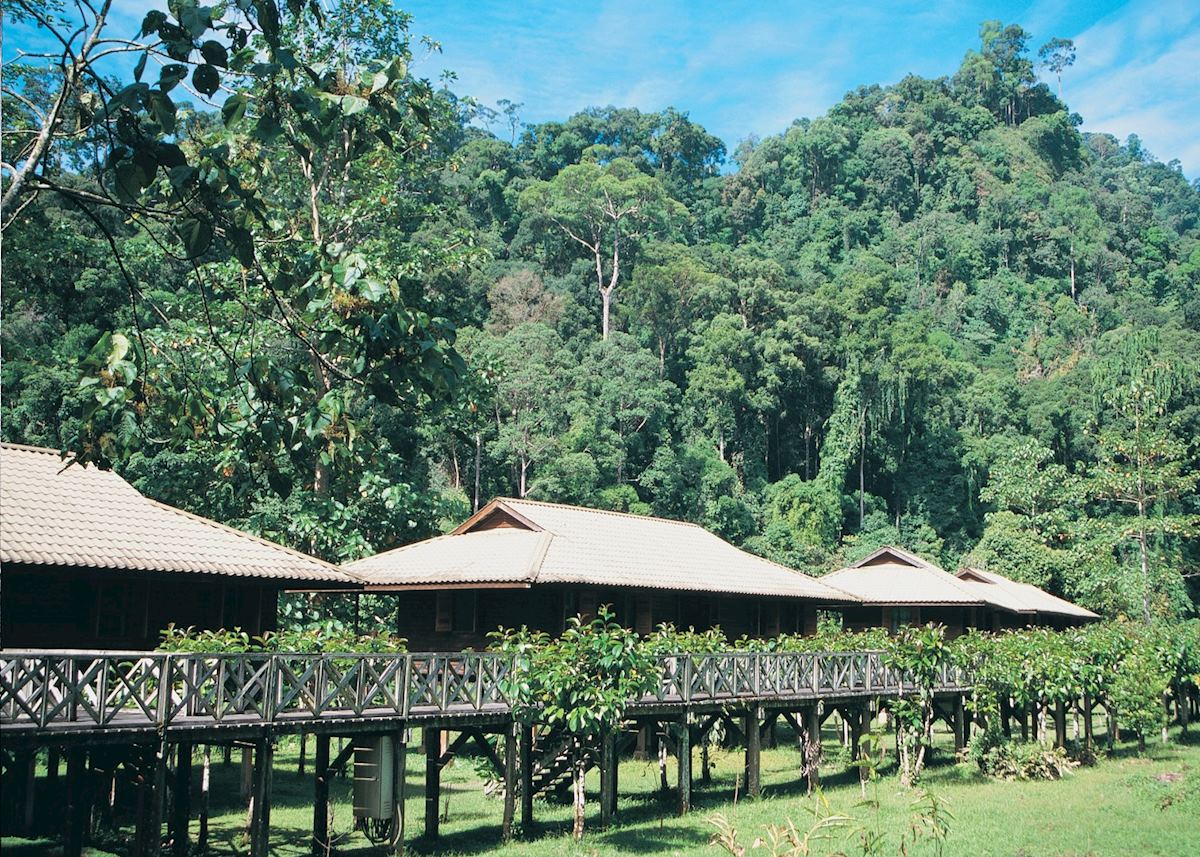 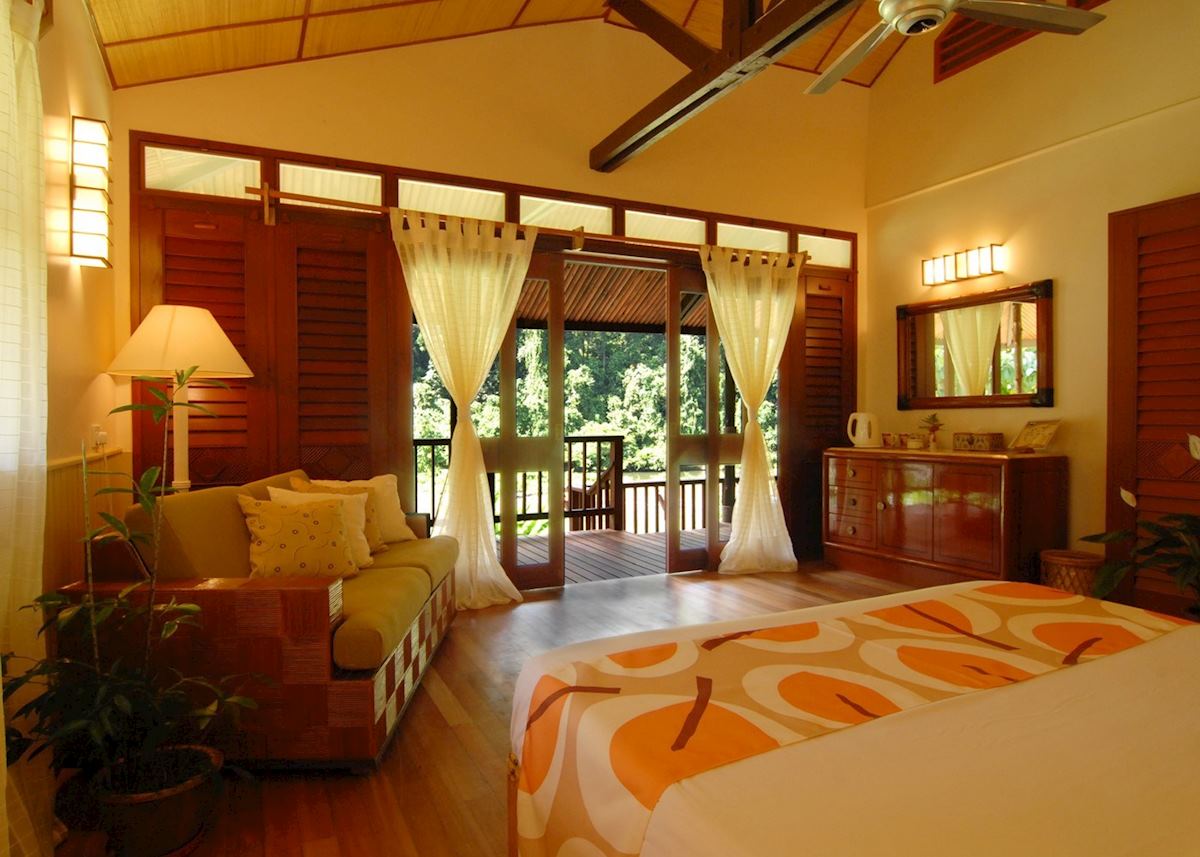 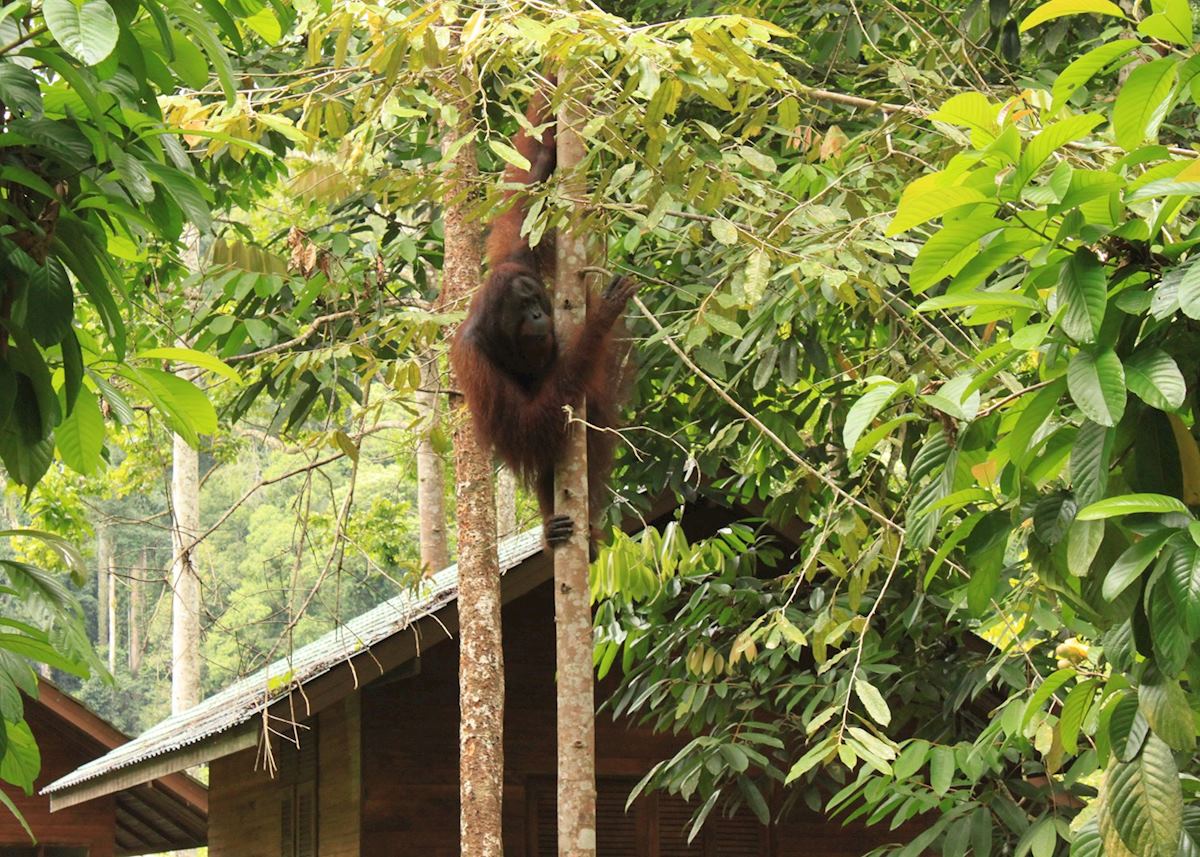 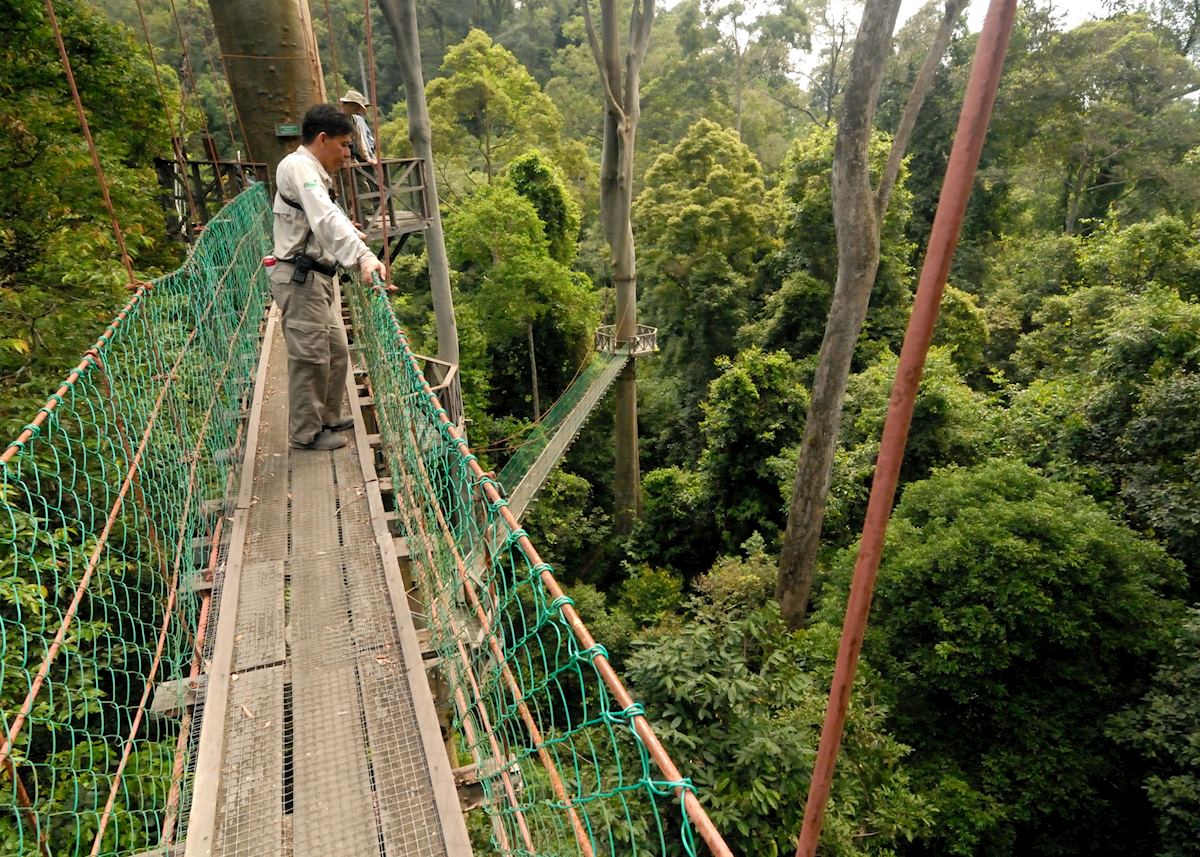 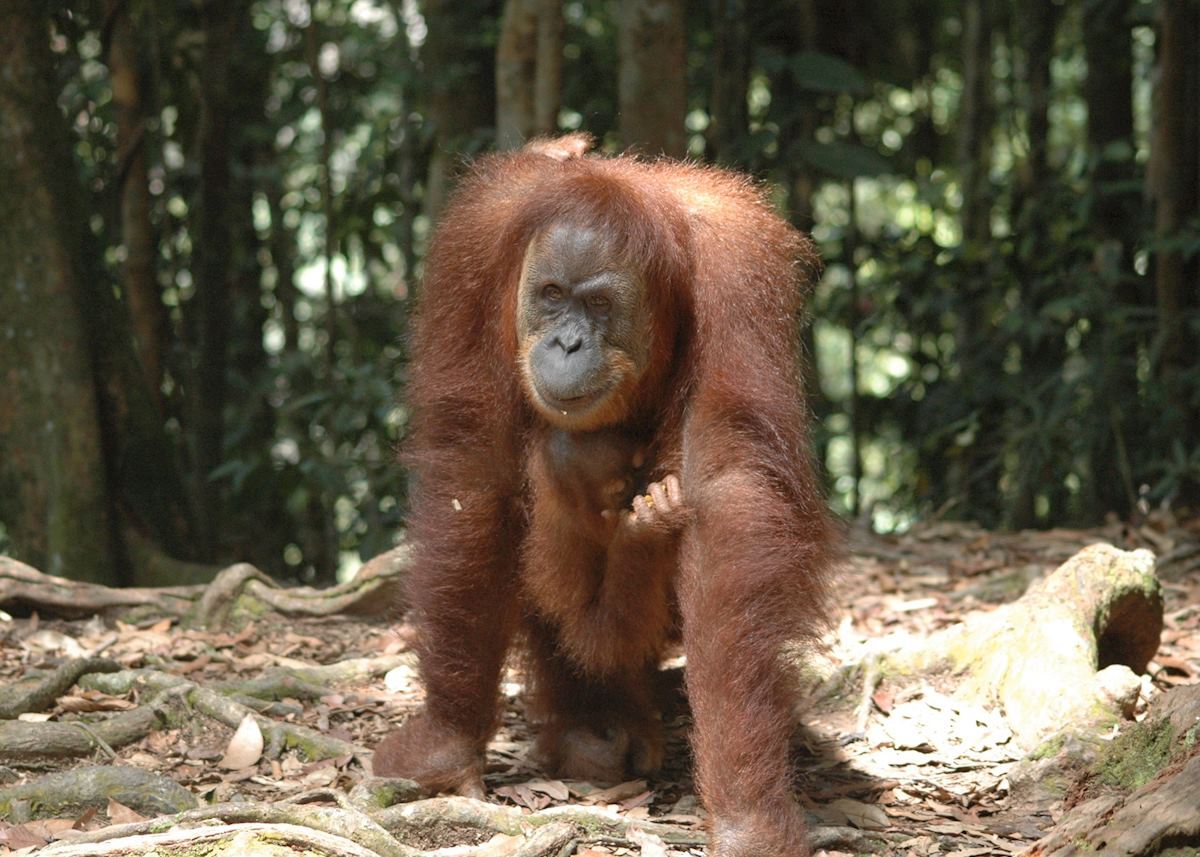 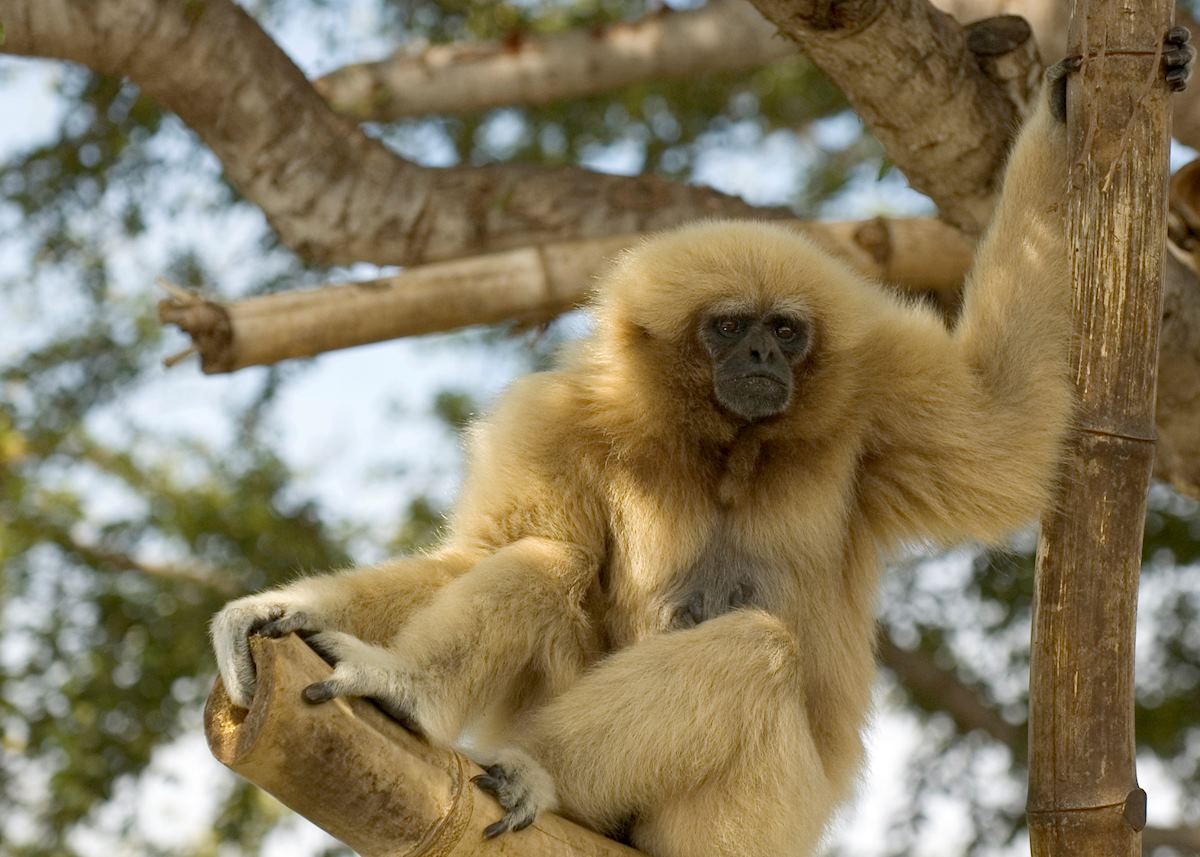 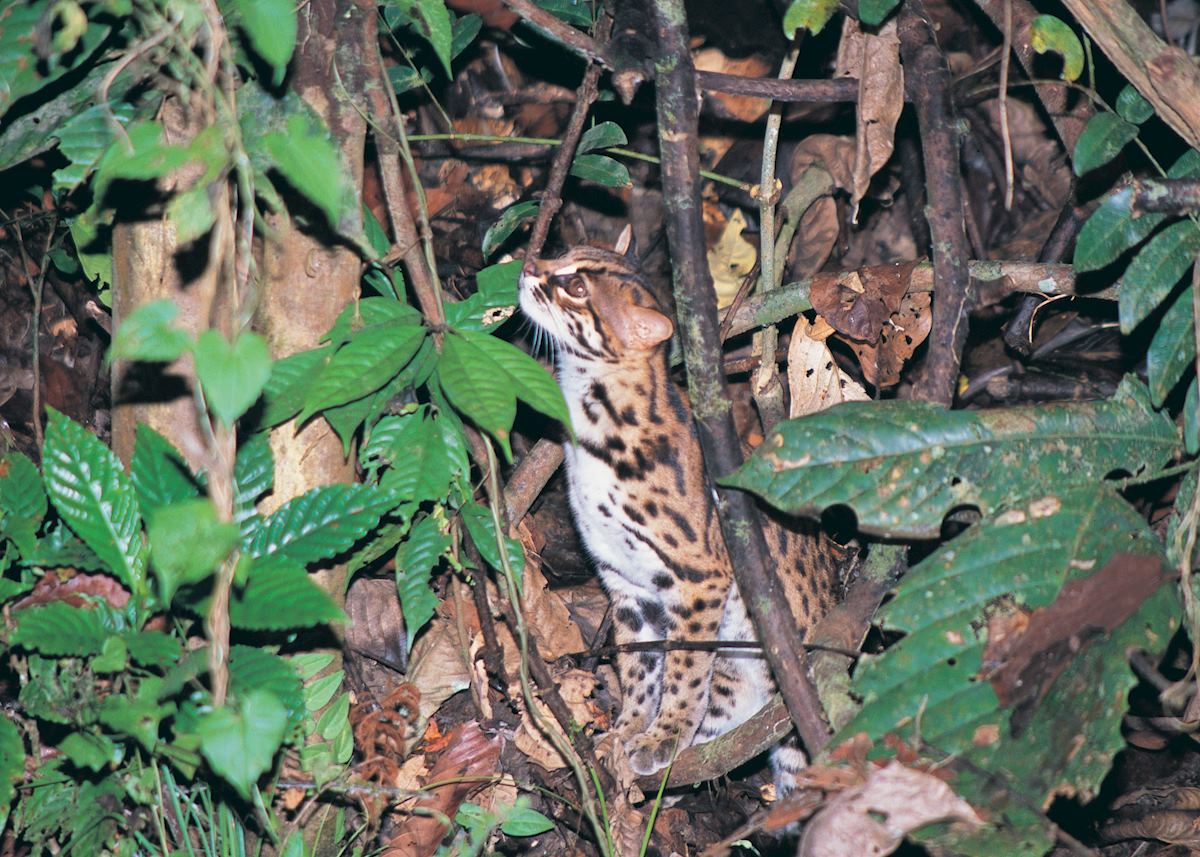 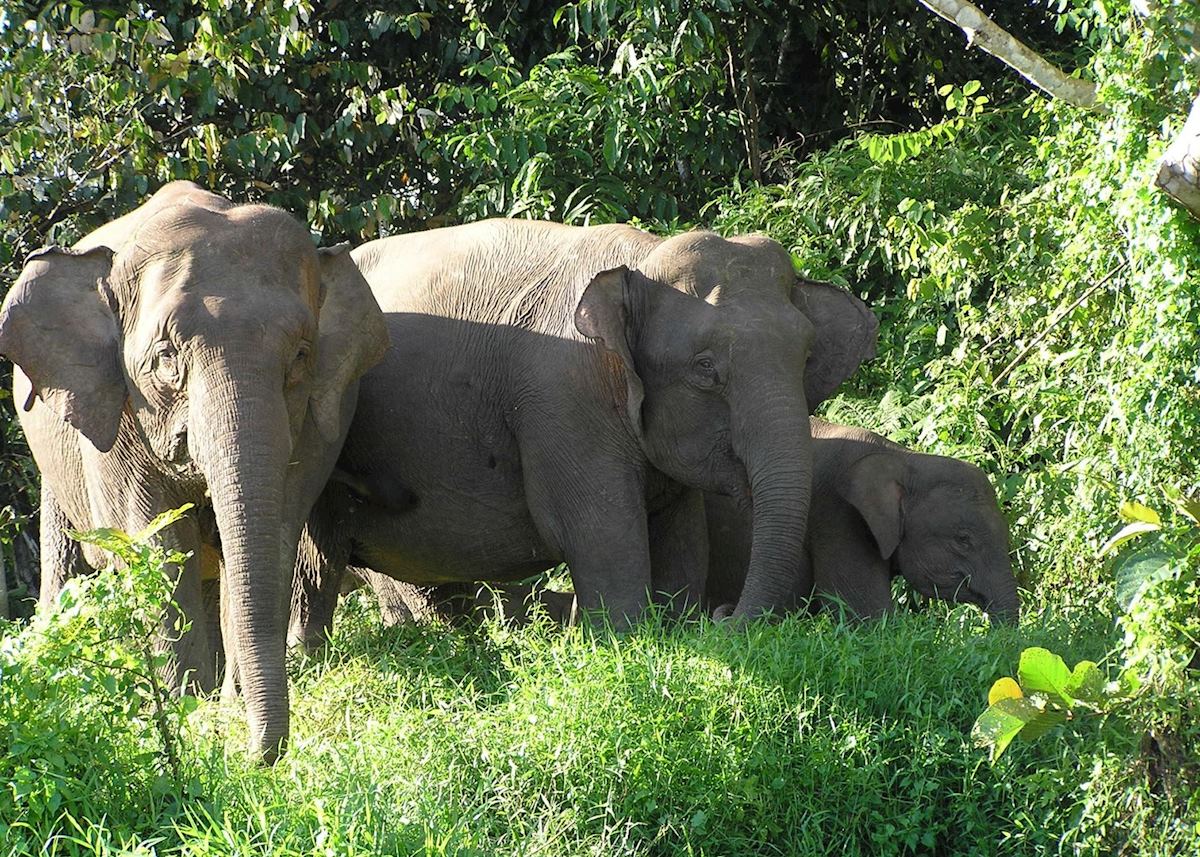 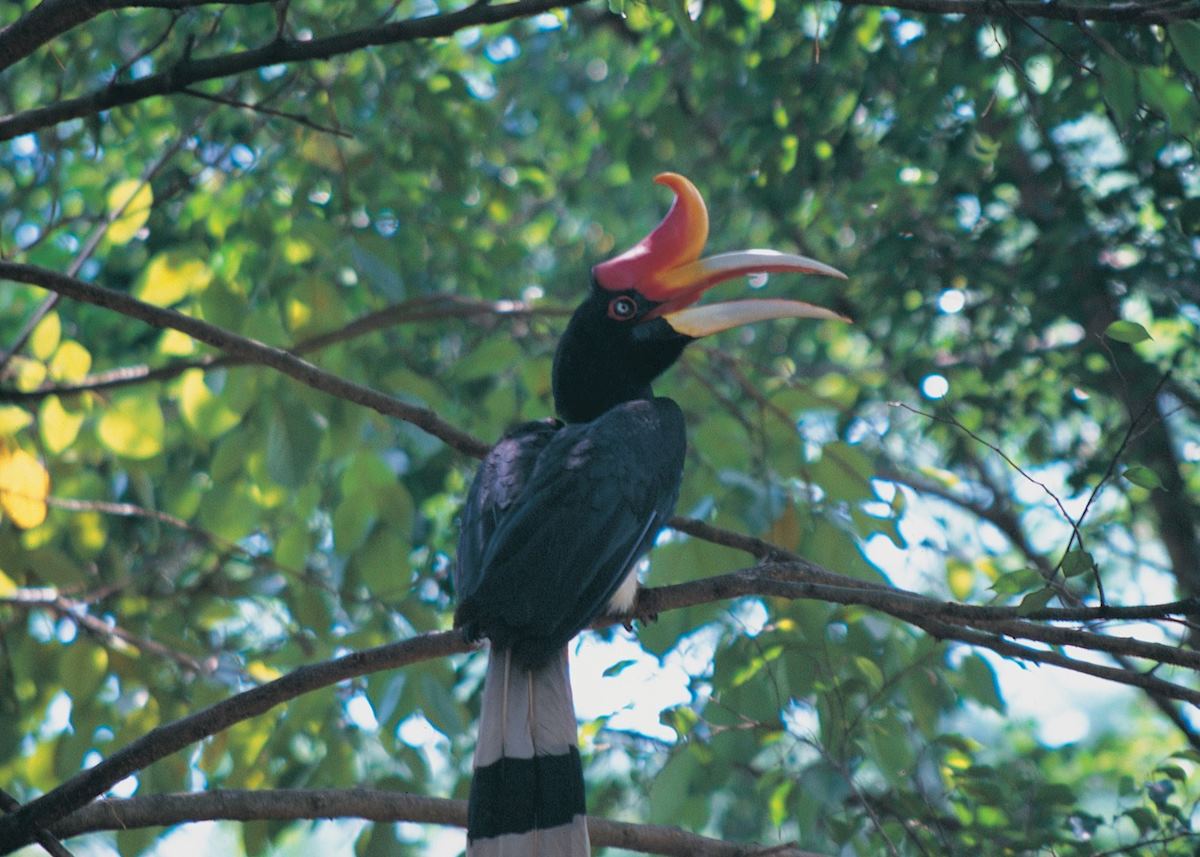 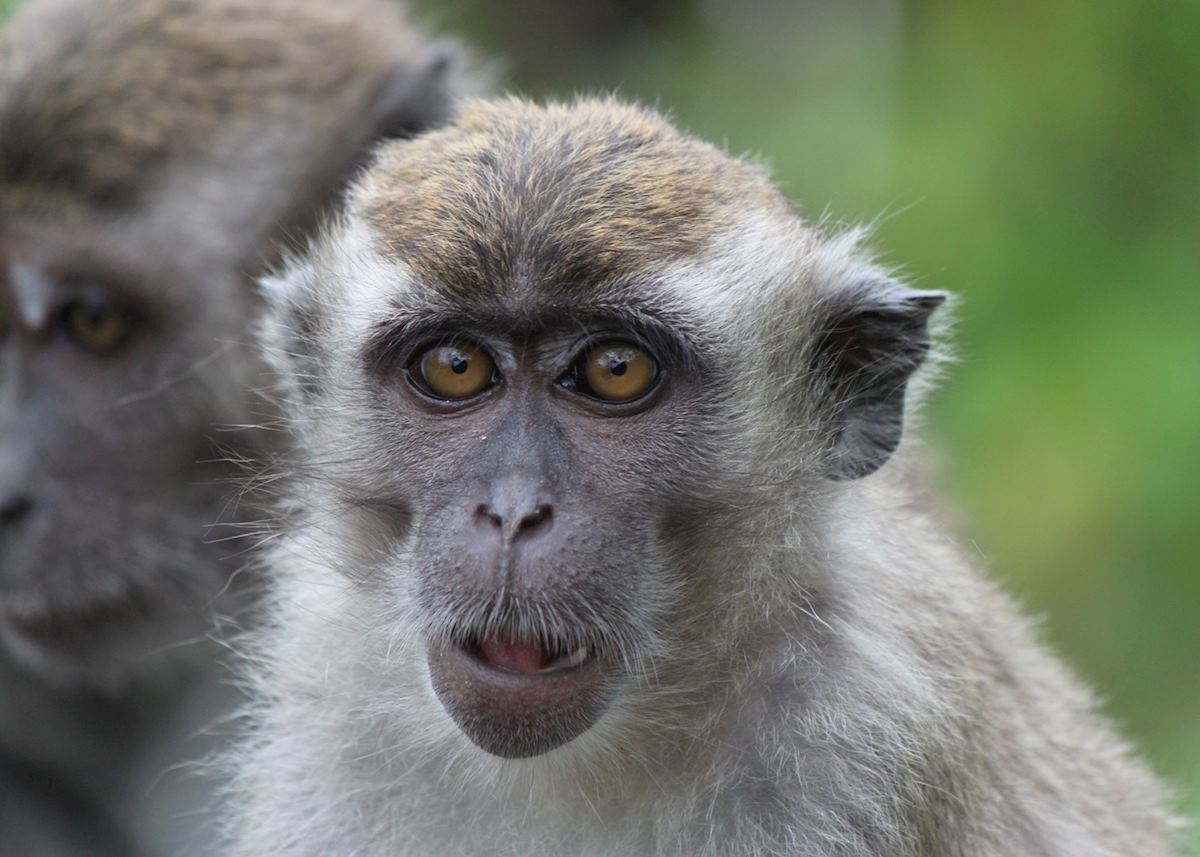 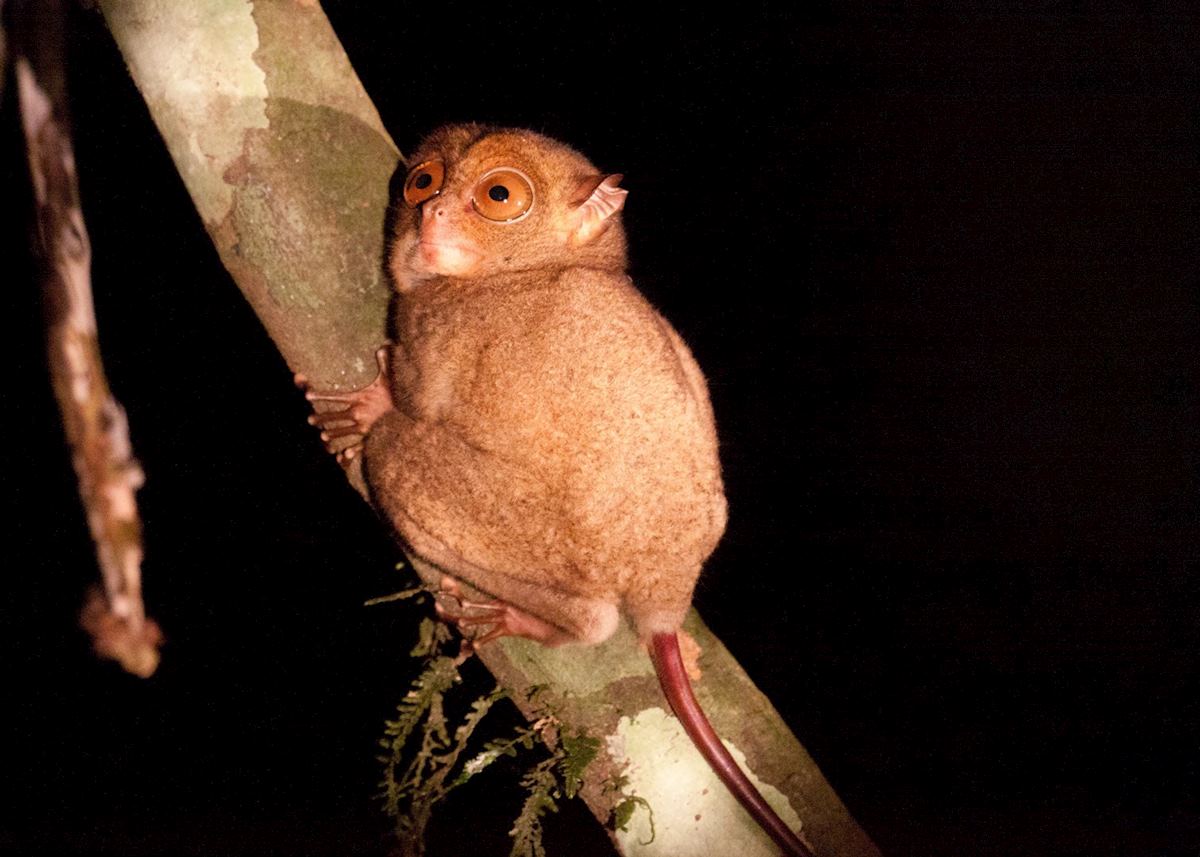 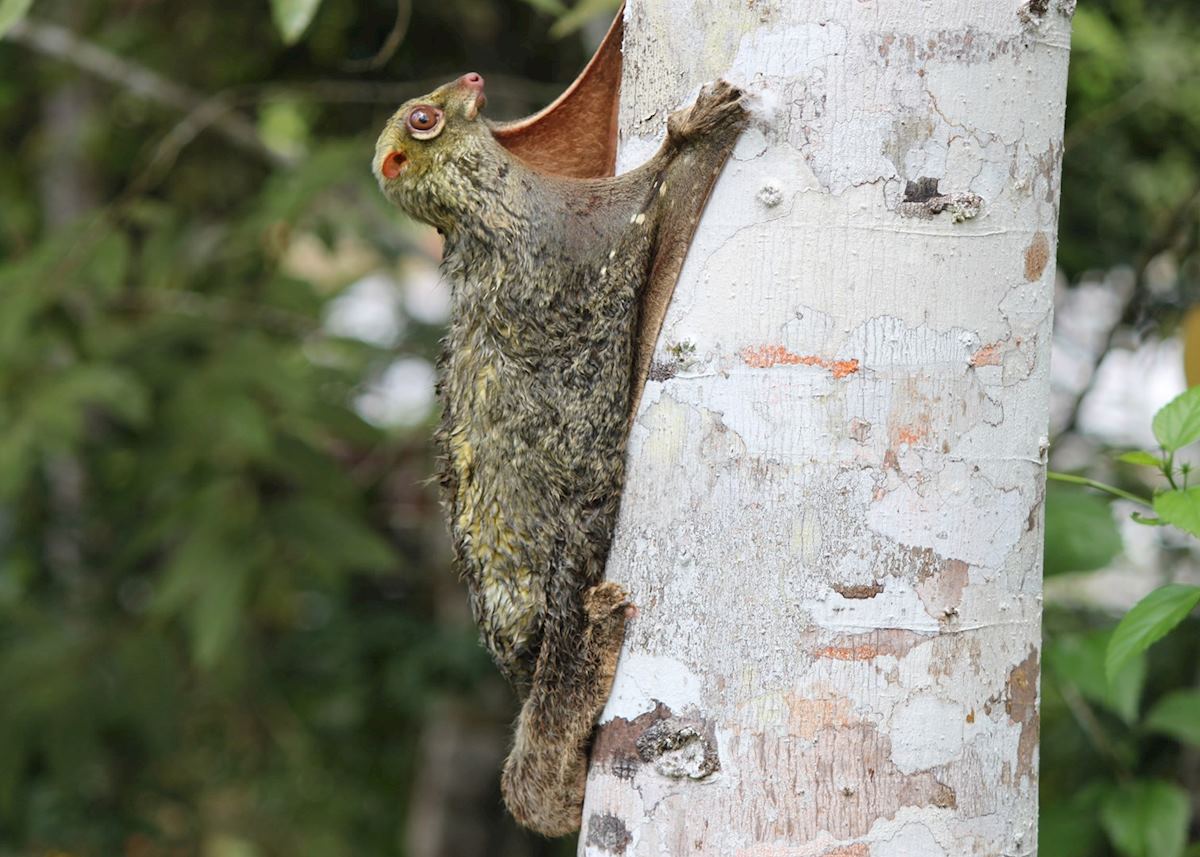 Find out more about tailor-made trips to Malaysian Borneo 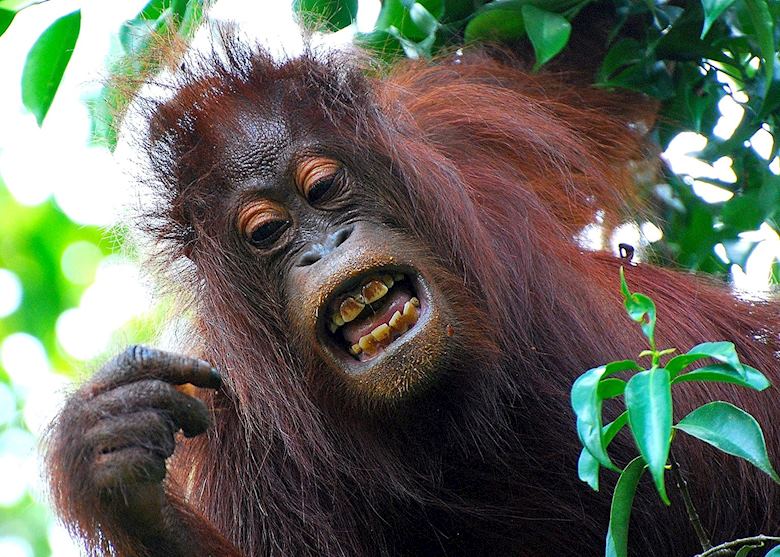 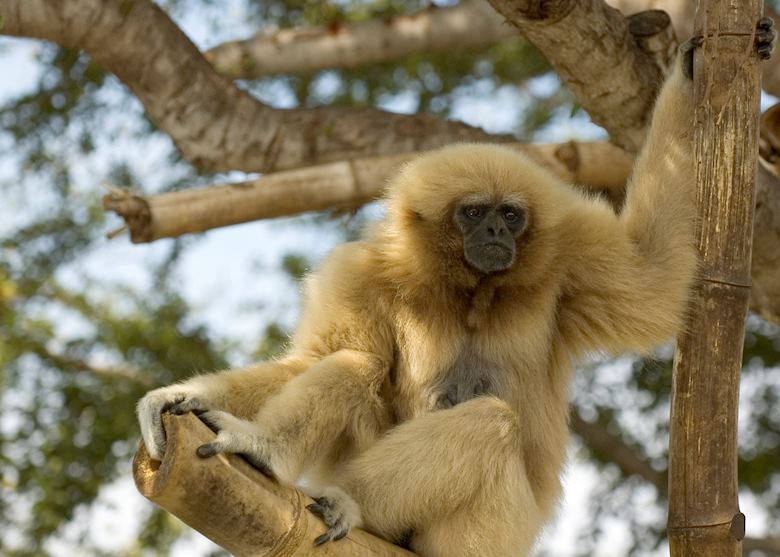 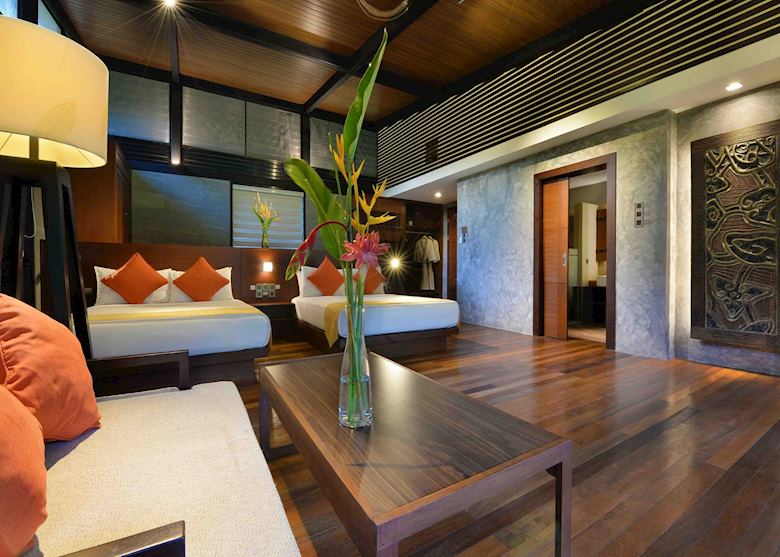 Nestled amidst some of Borneo’s primary rainforest alongside the banks of the Danum River, Borneo Rainforest Lodge is a fantastic setting for wildlife spotting and trekking.