Once Sabah’s capital city, Sandakan was virtually destroyed during World War II and its administrative functions were moved to Kota Kinabalu.

Now rebuilt, it is an interesting place to spend some time before continuing your journey to Turtle Island National Park, Lankayan or the Kinabatangan River. 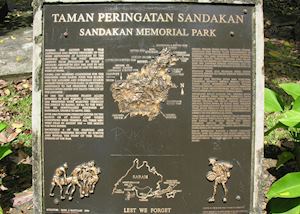 There is a thriving port and excellent wet market where the catch of the day is brought for sale, while the war memorial at Sandakan is built at the site of the former Sandakan Prisoner of War Camp in memory of the 2,400 Australian Prisoners of War who died here and in the death marches of World War II.

The shady, forested setting is a peaceful sanctuary to contemplate the tragedies of this all-too-recent history.

Our itineraries will give you suggestions for what is possible when you travel in Sandakan, and they showcase routes we know work particularly well. Treat them as inspiration, because your trip will be created uniquely by one of our specialists.

Map view Places in and around Sandakan

Places in and around Sandakan

Our expert guides to exploring Sandakan

Written by our specialists from their own experiences of visiting Sandakan, these guides will help you make the most of your time there. We share both our practical recommendations and the best ways to appreciate Sandakan at its best.

We’ve selected a range of accommodation options for when you visit Sandakan. Our choices usually come recommended for their character, facilities and service or location. Our specialists always aim to suggest properties that match your preferences.