From the age of the explorers to the modern era of environmental concern, there’s something about the Arctic and Antarctica that attracts excellence. In both regions, the standard of guiding is superb — in fact, it’s common for guides and expedition ships to cover both ends of the planet, shifting from north to south and back again with the seasons. Many of them have specialist knowledge of ornithology, marine biology or photography, so no matter which destination you choose, you can be sure of an exciting and highly educational experience.

Which areas are best for wildlife-watching?

Arctic: At Audley, we focus on Norway’s Svalbard archipelago, northeast Greenland and northern Finland, which lie within the Arctic Circle. We also offer trips to sub-Arctic regions where Arctic wildlife can be seen, such as Alaska and Manitoba in northern Canada. Spitsbergen in Svalbard and Churchill in Manitoba are unbeatable for polar bears.

Antarctica: The Antarctic Peninsula, which can be reached via Argentina.

Antarctica: Adélie, chinstrap and gentoo penguins. Also, emperor and macaroni penguins, plus orca, humpback whales, leopard and emperor seals. You might also see the king penguin, albatross and Antarctic skua on the voyage.

When's the best time of year?

Arctic: For Spitsbergen, May to September, particularly June and July, July to November.

How do I get there?

Arctic: Wildlife-watching destinations in the Arctic and sub-Arctic regions are surprisingly accessible. Simply fly to Longyearbyen in Svalbard and join a cruise, or, in North America, fly to Churchill in Manitoba, Anchorage in Alaska or Vancouver, the starting points for various land and sea trips.

Antarctica: There’s more travel involved, but there’s wildlife to be seen on the way. Fly to Ushuaia in Argentina and join an expedition ship; the smaller ones, carrying under 100 passengers, are best, since it’s only possible for 100 people to land on Antarctica at once. From Ushuaia, it’s a two-day voyage through the Beagle Channel and across the rough but wildlife-rich seas of the Drake Passage to the Antarctic Peninsula. Alternatively, to skip the Drake Passage, fly to King George Island and board a ship there.

How will I explore?

Arctic: On a cruise, you’ll head out in Zodiac boats or kayaks in the morning and afternoon, landing on a glacier or a bay to admire the spectacular landscapes and watch wildlife. On a Manitoba polar bear safari, you’ll set out in a tundra buggy or on foot.

Antartica: Exploring by Zodiac or kayak is highly recommended. On guided excursions to remote bays, you may see penguins porpoising and leopard seals lounging on the ice. Zodiacs can also zoom you ashore to walk alongside penguin colonies.

How close will I get to the wildlife?

Arctic: It’s crucial to give polar bears space. In Manitoba, you approach them by tundra buggy or, on a specialist walking safari, watch from a safe distance on foot. From a Zodiac, it’s possible to see whales and seabirds at close range.

Antarctica: Officially no closer than 10 m (32 ft), but occasionally penguins, particularly youngsters, will waddle up to check you out. If you’re kayaking, marine wildlife may come very close indeed.

Can I go scuba diving?

Arctic: Yes, you can — particularly around Spitsbergen.

Are there any unique experiences on offer?

Arctic: From Churchill, you can take a helicopter tour to see polar bears from above, or join a specialist walking safari to watch them from ground level.

Antarctica: On the Antarctic Peninsula, you can camp out on the ice for a night — an experience that’s impossible in polar bear country. Tucked up in a bivvy bag, you’ll be in earshot of penguins. To see emperor penguins, try a heli-tour.

start planning your trip to the polar regions 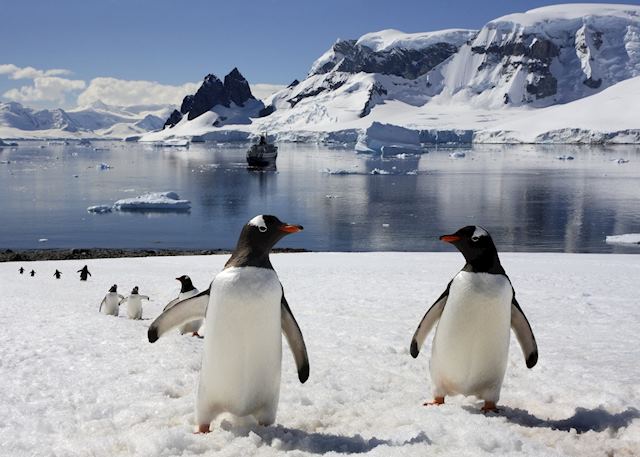