Located north of Lyon in Beaujolais and constructed in 1217 by Lord Guichard d’Oingt, Château de Bagnols has a storied history that spans centuries. The moated castle has been artfully transformed into one of the most impressive hotels in the region retaining its historic character and appearance but offering all modern comforts and amenities.

Step inside and you’re transported back in time with ornate plasterwork and wall hangings, enormous fireplaces, antique furniture, beamed ceilings and impressive trompe l’oeil (trick of the eye) wall paintings.

The 27 suites are divided between three categories. The Château Suites feature antique furniture, four-poster beds, and original 12th to 18th-century wall murals. The large Chai Suites are styled in a contemporary manner with decor in cool tones of grey, blue, and beige, while the Jardin Suites are in the original outbuildings, many of which boast vaulted ceilings with original wood beams and ground floor terraces with views of the vineyards.

One of the jewels of Château de Bagnols is its Michelin-starred restaurant 1217, which serves a menu that revolves around traditional local fare made with immense care and ambition. The hotel also has a large outdoor pool, a spa and a gym.

Château de Bagnols is one of our preferred properties in the region and offers the chance to combine wine country discovery with big city exploration in Lyon while at the same time indulging in five-star amenities.

Rooms are spread across three buildings, each with their own distinct style. For aristocratic glamour and ornate historic detailing, the Château Suites offer the chance to luxuriate in regal surroundings. The Chai Suites are far more contemporary and set in the chateau’s former cellar, while the Jardin Suites in the former outbuildings have a slightly more rustic charm with grand proportions and French windows opening onto the gardens. All rooms have a flat-screen TV and DVD player, and large bathrooms with modern fixtures. The Chai and Jardin Suites also have air conditioning and Wi-Fi.

Located just 40 minutes northwest of Lyon and situated in the middle of the bucolic Beaujolais wine region, Château de Bagnols is an enviable spot for visitors looking for the best of both worlds. Given its proximity, you can enjoy the gastronomic hub of Lyon as well as relaxing days tasting the region’s best wines.

Matching the majestic surroundings with heavenly food, Château de Bagnols’ restaurant, 1217, is a gastronomic delight. The menu offers an innovative take on Lyonnais classics, and the creative flare here has been awarded a Michelin star. The menu changes frequently with the seasons and the availability of local produce, with many ingredients coming from the castle’s own aromatic gardens. Smart dress is requested whether you sit in the elegant interior dining room or on the panoramic terrace.

Surrounded by cherry trees and lounge chairs, the large outdoor swimming pool is a highlight. There is also an extensive spa with an indoor pool, steam room and four treatment rooms, as well as a gym and formal gardens. Guests can explore the Beaujolais wine route, play golf, hike or visit a variety of museums nearby.

View all accommodation in Rhône-Alpes

Rhône-Alpes and nearby places 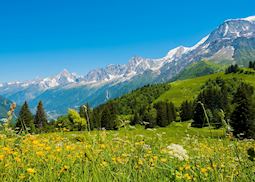