Known as the ‘Venice of the Alps’, Annecy is a graceful jumble of medieval canals and alleys dominated by a turreted castle once home to the Counts of Geneva. Below the castle sits a maze of winding cobbled streets and gurgling waterways crossed by old bridges. Pastel-painted 16th- and 17th-century buildings line the lanes, which lead to two large parks on the shores of Lac d’Annecy, the town’s namesake lake whose crystal-clear waters make it the cleanest in Europe. All this is set against a backdrop of the Alps.

I prefer to avoid big cities and enjoy untouched places like Lac d’Annecy. When I visit, I like to ride a bike along the lake or go paddle boating before enjoying a lakeside picnic.

At the heart of Annecy’s colonnaded passageways and cobbled streets is the town’s most renowned landmark, the Palais de l’Isle. This sturdy 12th-century building sits on an islet between two spurs of the Canal du Thiou. Over the centuries it has been used as a prison, courthouse and mint.

The palais has become one of Annecy’s most photographed sights thanks to its picturesque setting with water running on either side, and geranium-filled flower boxes hanging on the railings and balconies nearby. Inside, you can wander the rooms and see exhibitions on local history and architecture.

Dominating the town from its lofty perch, the Château d'Annecy (Annecy Castle) was the seat of the Counts of Geneva. Over the course of several centuries it was modified and extended, and its design illustrates just how much French castles changed during this time. The Queen’s Tower, with its simple construction and 4 m (13 ft) thick walls, is the oldest part of the castle, dating back to the 13th century. The Logis Nemours and the Logis Neuf date from the 16th century and show the typical flourishes of Renaissance architecture.

Inside, you’ll find a series of exhibits of medieval furniture and sculpture, contemporary art and the natural history of the region. The rooftop terrace offers views down over the town to the lake and the mountains beyond.

Boat tour of the lake

Wander from the town to the waterfront and you’ll reach the leafy Jardins de l’Europe and Champ de Mars, overlooking the waterfront. These green spaces are popular for picnics, leisurely walks and long lunches, and you can also hop on a pleasure cruiser here for a tour of the lake.

There are lots of options for lake tours, from one-hour trips to lunch and dinner cruises or hop-on hop-off services where you can stop off in lakeside villages such as Talloires and Menthon, which is home to the Château de Menthon-Saint-Bernard.

The boats normally travel clockwise around the lake, so arrive early and choose a seat on the left-hand side for the best views.

There are several places in Annecy where you can hire bicycles, and the Plage de l'Impérial (Imperial Beach), a private lakeside beach on the edge of town, makes a good destination for cyclists. Follow the waterfront cycle path from the heart of town toward Imperial Beach and take in the sweeping views of the lake and mountains along the way.

Along with grassy beaches, a supervised swimming area and a restaurant and bar, there’s space for volleyball, badminton and pétanque, and plenty to keep young children entertained, including slides and paddle boats.

If you’d prefer a longer cycle, you can continue your ride along the lake’s western coastline, passing a plentiful selection of beaches, including the Plage des Marquisats.

Hiking with a view of the lake

Lac d’Annecy’s crystal-clear waters are popular for kayaking, sailing and diving, but for the best views, head for the hills. An extensive network of trails leads from the town around the lake or up into the mountains. One of the most rewarding but accessible routes is to Le Semnoz, a high altitude plateau above Veyrier du Lac that offers panoramic views of the northern Alps and the Jura, and on clear days, views of Mont Blanc. En route the trail passes Alpine meadows and pastures dotted with cows and sheep in scenes reminiscent of The Sound of Music.

Annecy is at its best between May and September, when the window boxes overflow with geraniums and you can sit outside at cafés and restaurants along the cobbled streets. It’s also the best time to swim or take a boat ride on the lake or head off on foot or by bike into the mountains. 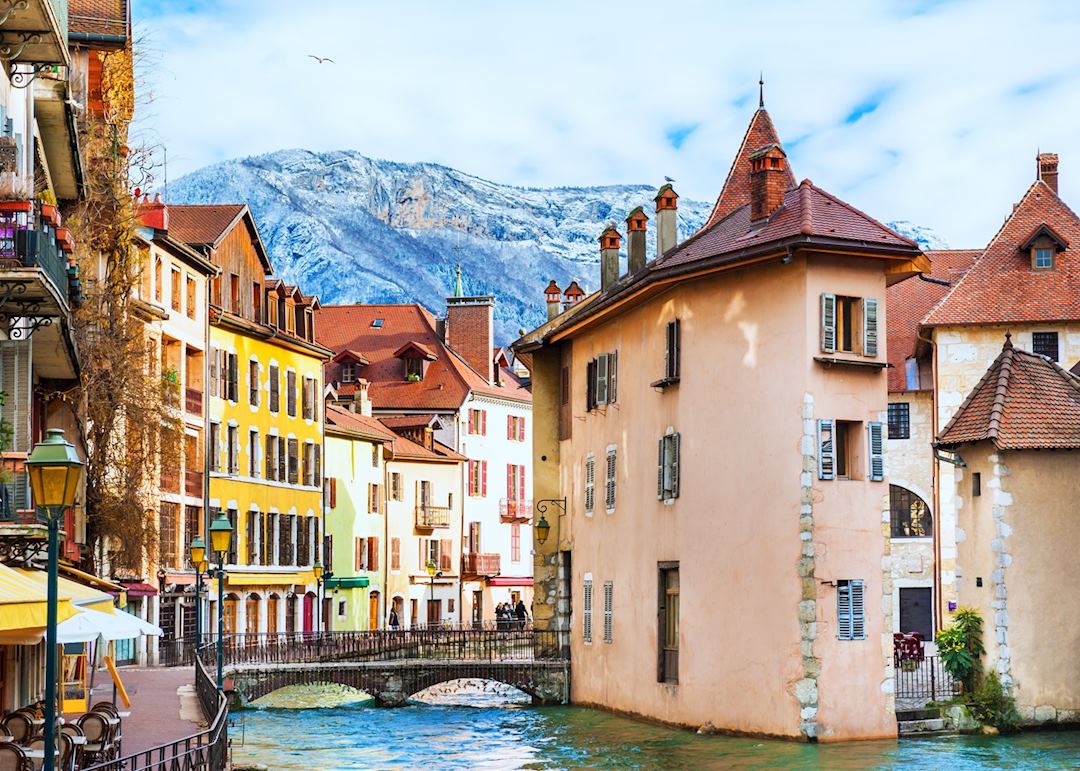 Start planning your trip to Annecy

We’ve selected a range of accommodation options for when you visit Annecy. Our choices usually come recommended for their character, facilities and service or location. Our specialists always aim to suggest properties that match your preferences.

Our specialists seek out authentic ways to get to know the places that could feature in your trip. These activities reflect some of the experiences they've most enjoyed while visiting Annecy, and which use the best local guides.