Steep cobbled streets lined by medieval stone houses make up the small town of Beynac-et-Cazenac which sits on the north bank of the Dordogne River. The town, which is locally known as Beynac, is dominated by a 12th-century fortress which sits in a key defensive position on top of a limestone bluff sternly surveying the surrounding landscape and the river below. In summer, the river is awash with canoes, kayaks and traditional gabarres (flat-bottomed wooden boats) giving this already scenic location a rather festive atmosphere.

The town’s main sight is the imposing Château de Beynac which sits on a 200 m (656 ft) cliff above the town. The castle owners, the barons of Beynac, were loyal to the French during the bitter Hundred Years War (from 1337 to 1453) and although the fortress saw little real action, its defences are impressive with a double moat and a double barbican. Its lofty position afforded the guards a panoramic view of the valley and today, that view remains unchanged. Arch-rival Château de Castelnaud, which was held by the English, sits just upstream on the opposite bank of the broad river.

Inside, Château de Beynac is rather sparsely furnished but its architecture displays an interesting array of styles that trace the development in defensive thinking over the course of the medieval era. The oldest part of the castle is the large Romanesque keep with its watchtowers and narrow spiral staircase. The donjon (innermost part of the keep) and guard room date from the 12th century, while the barbican and kitchen were added in the 13th century.

More impressive is the 15th-century State Hall with its Renaissance fireplace and vivid tapestries depicting hunting scenes and other activities. A small oratory is next door and displays a series of 15th-century frescoes, including a pietà and Last Supper. You can also see the coat of arms of Beynac here.

The chateau’s private apartments date from the 16th and 17th centuries and are reached by a monumental Renaissance staircase. These rooms are the most evocative with period furniture, tapestries and a painted walnut fireplace. Decorative painted panels reach to ceiling height with carved beams overhead.

Below the castle, the town fans out in a warren of narrow cobbled streets flanked by a hodgepodge of rickety old houses, many of which are covered in vines. Among them you’ll find a host of cafés and restaurants as well as independent boutiques selling regional food, wine, tea and linens. Wandering the laneways, it’s not difficult to imagine life here in medieval times and at sunset the village looks particularly striking.

Walk along scenic Rue de l’Ancienne Poste and you may well find it familiar: it was used as a location for scenes from Lasse Hallström’s Chocolat starring Johnny Depp and Juliette Binoche.

The castle is open year round but a visit is best timed between April and October when the weather is pleasant and you’re more likely to experience the sweeping views from the fortress terrace. In summer, river cruises and canoeing trips are a pleasant way to explore but can be particularly busy in July and August. 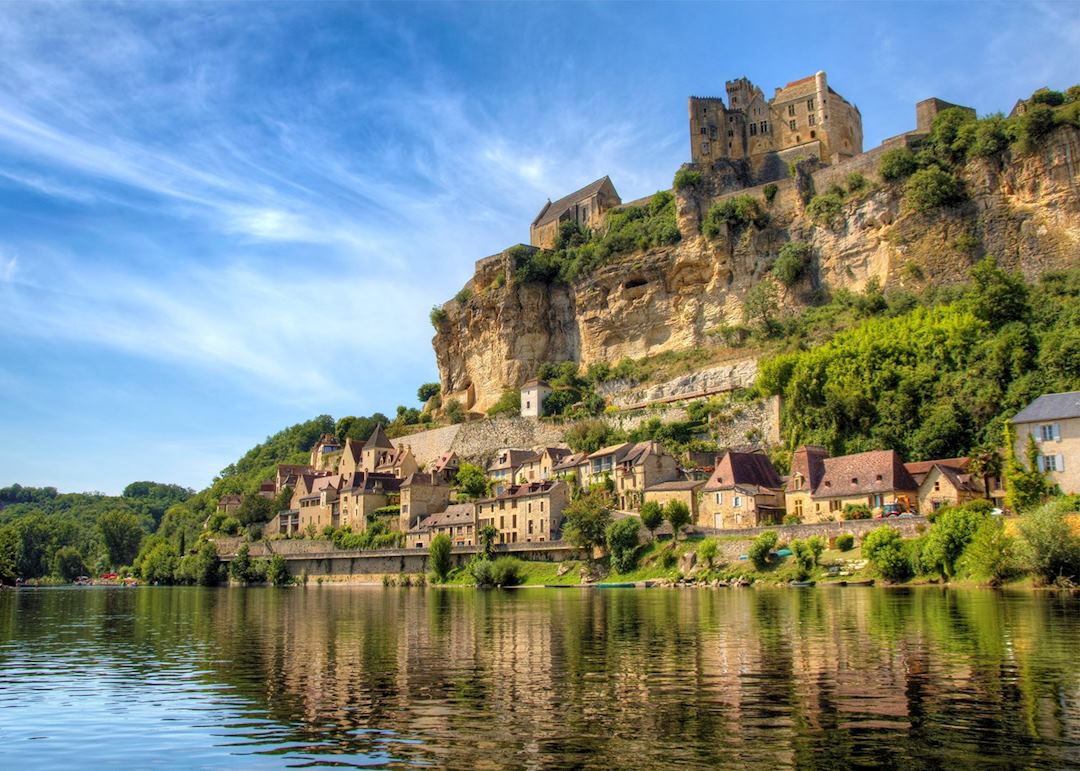 Start planning your trip to Beynac-et-Cazenac