Stately and refined, Aix-en-Provence started life as a Roman colony set around natural hot springs and grew into the medieval capital of Provence. Noblemen, lawyers, bankers and their protégées flocked here, giving the city an intellectual air that it still retains to this day. Along with a barrage of handsome mansions and an outstanding opera festival, Aix has strong links to some of France's most renowned artists and writers. Our specialists visit often and can help you plan your trip based around your specific interests.

As a student of art, I’m drawn to Cézanne’s hometown. I enjoy just sitting and admiring the city’s chic residents while sipping a glass of rosé and sitting on one of the moss-covered fountains in the Place des Cardeurs.

Things to see and do in Aix-en-Provence

Aix's chic air and harmonious living is immediately apparent. You notice everyone, even the city's legion of students, dresses smartly. The city's main boulevard, the leafy Cours Mirabeau is lined with plane trees. Along each side stand grand Renaissance mansions with wrought-iron balconies and shuttered windows, many of them now housing cafés that spill out onto the pavement. Look out for Les Deux Garçons brasserie, a one-time haunt of close friends writer Émile Zola and Post-Impressionist painter Paul Cézanne.

The Cours Mirabeau follows the line of the old city wall, and to the north is the old town. It’s a merry jumble of medieval lanes lined with shops and bistros, where you'll find the Cathedral of the Holy Saviour, which showcases a range of architectural styles from the 5th to the 17th centuries. It was built on the site of the town's Roman forum and has a Romanesque cloister, Gothic doorways, 16th-century tapestries and a Renaissance dome supported by Roman columns.

Next door, the former archbishop's palace hosts the city's renowned Festival d'Aix-en-Provence every July. The month-long celebration features everything from opera and ballet to street entertainment.

Nearby is the classical hôtel de ville (town hall), built in the 17th century. It’s set on a square alongside a clock tower dating from 1510 and the ornate former corn exchange. The thermal springs that originally lured the Romans here are nearby, a modern spa now making use of the lime and carbonic springs that bubble from the ground.

We recommend trying the local speciality, calissons. A smooth paste of candied fruit and ground almond topped by a layer of royal icing, you can buy them from shops throughout the old town.

South of the Cours Mirabeau, the residential district Quartier Mazarin was home to Aix's gentry in the late 17th century. Here, street upon street of graceful old mansions unfold, some of which have been converted into galleries and museums.

Set in a 17th-century priory, the Musée Granet features works by artists such as Picasso, Matisse, Van Gogh, Monet, Klee and local hero Cézanne. Nearby, the Hôtel de Caumont museum is housed in one of the city's most lavish mansions, set around formal French gardens. Along with its palatial private apartments, which are packed with original antiques and artworks, the museum hosts several exhibitions a year focusing on the region's rich artistic heritage.

Throughout the centuries, Aix has been a hub of intellectual ideas. Artist Paul Cézanne was born here, and he and his childhood friend, writer Émile Zola, are celebrated across the city. Northeast of the old town is the Atelier de Cézanne, the artist's last studio. It has been restored to look like Cézanne just walked out of the door, all his possessions and equipment just as they were.

Also in Aix is the Bibémus Quarry, where the honey-toned stone that is so characteristic of the city was cut. After the quarry was abandoned, Cézanne came here regularly to paint the landscape. Reproductions of his works are positioned around the quarry in the spots where he set up his easel. The geometric forms of the cut rock are credited with inspiring the artist's move toward Cubism. 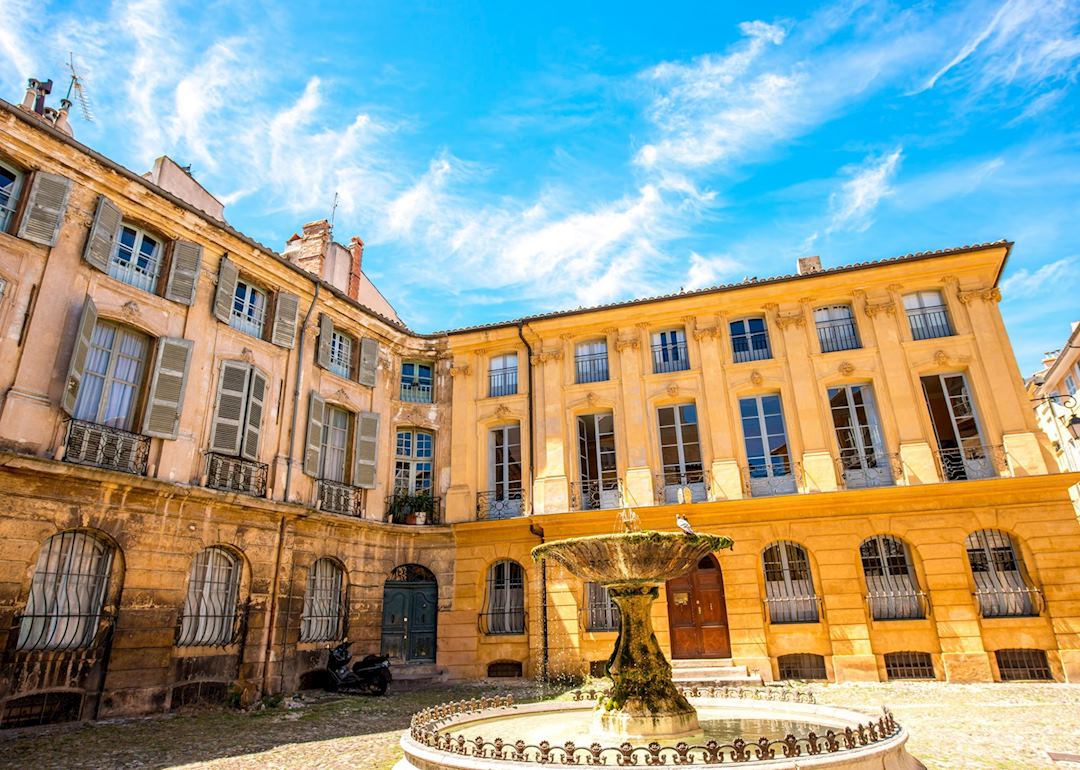 Start planning your trip to Aix-en-Provence

We’ve selected a range of accommodation options for when you visit Aix-en-Provence. Our choices usually come recommended for their character, facilities and service or location. Our specialists always aim to suggest properties that match your preferences.