Set on the north bank of the Dordogne River against a backdrop of steep cliffs, La Roque-Gageac is a historic town little changed in centuries. Many of the houses date from medieval times, though there are some Renaissance mansions among the honey-toned townhouses that line the steep and narrow streets. It’s thought that the caves in the cliffs have been inhabited since prehistoric times and a 12th-century fort built into the bluff behind the village was in use until the 17th century. At its heart, however, is the river, and in summer canoes and kayaks ply the water along with traditional flat-bottomed gabarres.

La Roque-Gageac was an important trading point on the Dordogne for centuries and the town grew as its wealth amassed. With little space by the riverside, the streets quickly rose along the base of the cliffside in an irregular fashion. Today, small shops and restaurants now serve the throngs of visitors who arrive in summer. The main attraction is simply wandering the atmospheric streets, lingering over lunch and possibly taking a cruise on the river.

Above the town, set into the overhanging cliffside, is a 12th-century troglodyte fort with a series of defensive positions carved into the rock by medieval soldiers. The fort is no longer open to the public as a serious rockslide has made it unsafe, but you can still see its outlines clearly. Nearby is the Renaissance Manoir de Tarde, one of the town’s most imposing structures.

As you climb along the higher streets you’ll see that many of the houses are built directly into the cliffside, while beyond them the views become ever more dramatic with the Dordogne Valley stretching out before you. Replica gabarres, the traditional boats used to transport goods, now offer hour-long narrated cruises along the river between the steep cliffs and past the nearby fortresses of Château de Beynac and Château de Castelnaud. If you’d prefer to see the region under your own steam you can also rent canoes and kayaks to paddle the waters.

As well as providing a natural defensive position, the cliffside location also protects the town from the worst of the northern cold with the rock face soaking up the southern sun and giving La Roque-Gageac an unusual microclimate. In the 1970s, gardener Gerard Dorin exploited this fact and created a jardin exotique (exotic garden) by the village’s small Romanesque church. The garden has no boundary and the exotic plantings now stretch across the village. Expect canopies of palm fronds and banana leaves shading narrow passageways, and figs, passion fruit, olives, lemons, oranges and pomegranates hanging off branches as you stroll by. Hibiscus, bougainvillea and oleander provide splashes of summer among the ochre-toned buildings and stone-tiled roofs.

For further garden exploration, the nearby Jardins de Marqueyssac (just to the west of the village) stretch out across a rocky bluff and include manicured box hedges, intricate topiary, panoramic viewpoints and even a via ferrata. On Thursday nights in July and August the gardens are lit by candlelight and host a light and sound show.

La Roque-Gageac can be visited year round but April to June and September to October are particularly good times to visit with pleasant weather but none of the crowds of the height of summer. River cruises and canoe trips operate from March to October, but August is particularly busy. 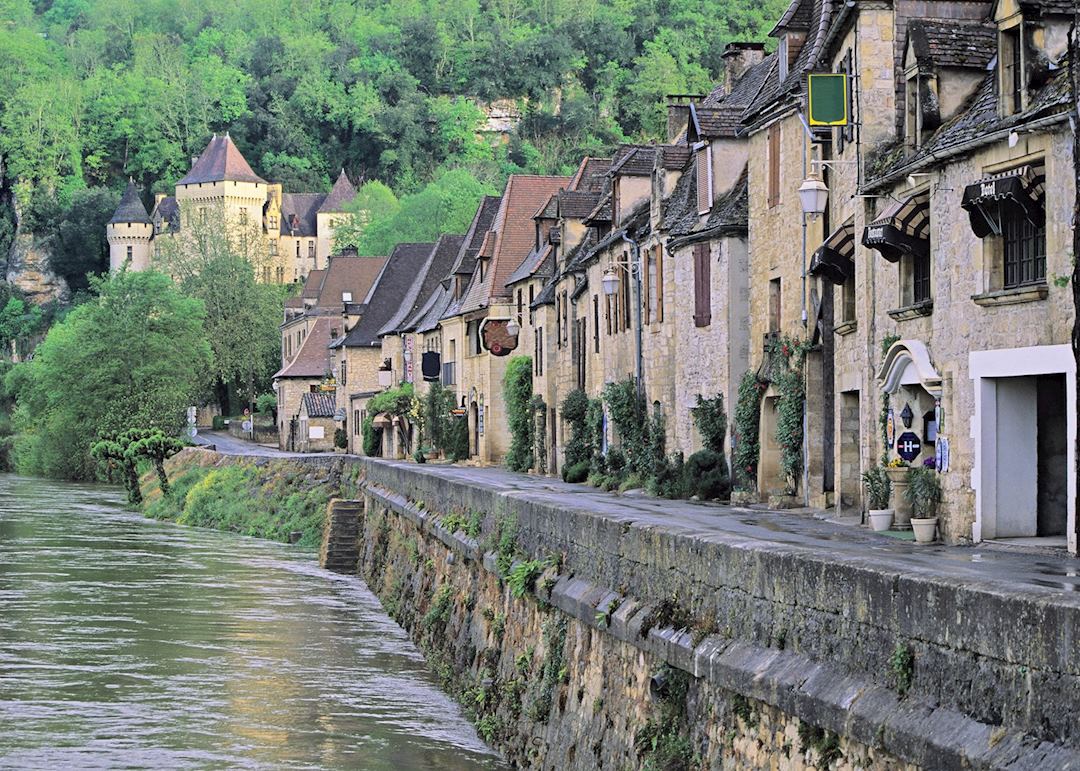