Embodying the essence of French refinement, Paris is a city of unmistakable monuments and renowned museums. Nevertheless, it’s retained its local districts, or ‘quartiers’, and remains compact and walkable. Our specialists regularly visit this elegant and complex metropolis, searching for new angles to help you explore its highlights, while also researching quieter, local areas and the best places to stay or experience French cooking.

You can visit the Louvre in the morning and linger over a three-hour lunch with a bottle of Bordeaux. The next day, while away your morning at a café before taking a chocolate and pastry tour of Saint-Germain and finish the evening with a romantic stroll alongside the Seine.

There’s nowhere quite like Paris. I come back time and again, for the art, the culture and, the food, of course, but also to spend long lazy afternoons at a café watching all the people walk by.

Things to see and do on your holiday to Paris 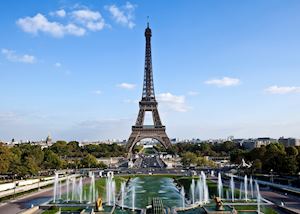 The distinctively curved silhouette of the Eiffel Tower has become synonymous with the city. Originally built as a temporary installation for the Exposition Universelle of 1889, this marvel of engineering was the tallest edifice on the planet for 40 years and remains the tallest in Paris.

A guided tour can give you a rare glimpse at the century-old machines that continue to power the massive elevators. You can also learn about the tower’s vital role in World War II history.

At the top, you can see Haussmann’s street plan laid out beneath you, like a model of the city. The view is particularly impressive at night, with the geometrically laid-out green space of the Champs de Mars on one side, the fountains of the Trocadero Palace and the Seine on the other, and the cars and streetlamps transforming the boulevards into rivers of light.

Île de la Cité is the larger of the two small islands in the Seine and makes up the spiritual and geographic heart of Paris. In fact, all routes in France are measured beginning here. Kilometre zero is marked by an eight-pointed metal star embedded in the paving stones of the Place du Parvis Notre-Dame, the broad square in front of Notre Dame Cathedral.

The cathedral was begun in 1160 on the site of a smaller forebear and construction took hundreds of years. It was one of the first buildings in the world to incorporate flying buttresses, made necessary by the high stone walls and the enormous span of the three intricate rose windows.

You can climb the two symmetrical bell towers on the western façade, steep ascents up a stone spiral stair. Centuries of use have worn smooth dips in the middle of the steps and the way is narrow. But at the first stop you come literally eye-to-eye with some of the grotesque gargoyles that watch over the city. Another level — and more stairs — gives you a sweeping view of the city’s sea of mansard roofs, the Eiffel Tower rising in the distance.

Below the cathedral, the Crypte Archéologique preserves the remains of the site’s history, from the Gallo-Roman period to Haussmann’s 19th-century sewers.

Not far away, tucked inside the Palais de Justice (city law courts), 13th-century Saint-Chapelle is a Gothic edifice intended to be a reliquary. It’s almost entirely made out of glass: its walls consist of tall and slender, stained-glass windows soaring upward to a vaulted ceiling, and separated only by slim pillars. The design induces a sense of weightlessness and dizzying height, as you step into the nave and find yourself bathed in a sapphire and amethyst glow. The rainbow hues of the glass are even more vivid if you visit on a sunny day: it’s like standing in a giant kaleidoscope, the refracted light dancing all around the chapel. 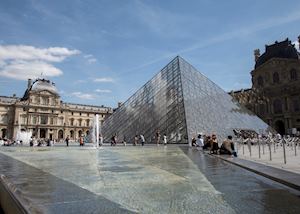 Arguably the most-visited museum in the world, the Louvre is a rambling, glorious palace that includes three wings, a dungeon, and IM Pei’s glass-and-steel pyramid at the main entrance. Exploring all of its millennium-spanning collection of 35,000 pieces would take years, if not a lifetime.

A listing of just the most renowned highlights would fill a book, but the most popular is da Vinci’s Mona Lisa, which draws millions of visitors a year. The sheer size and volume of the art demands a careful strategy, lest you be overwhelmed. Self-guided tours are available online with quirky themes like masterpieces, outsized works, romantic love, and lions.

Thought it’s often overlooked, the medieval Louvre section in the basement showcases the foundations of the original fortress, including a dungeon and moat.

Set in a light-filled Beaux-Arts former railway station, the Musée d'Orsay hosts a vast collection of works created from 1848 to 1914. The era spawned a number of artistic movements, but is primarily known for the Impressionists and Post-Impressionists, and many of their best-known works are on display here.

Visitors can see Monet’s renderings of his gardens at Giverny, including his Blue Water Lilies, as well as Degas’s evocative portraits of ballerinas, Manet’s scandal-ridden Le déjeuner sur l’herbe and several of Van Gogh’s self-portraits. The museum boasts the world’s largest gathering of paintings and sculptures from those styles, as well as architectural drawings, decorative arts and photographs.

The Musée Rodin has two branches, one outside Paris and another housed in an 18th-century townhouse and its surrounding gardens located right in the heart of the city. Sculptor Auguste Rodin donated his entire estate to the French state in 1908, including his own works as well as photographs, sculptures, drawings, and paintings that he had collected over his lifetime.

Visitors can contemplate the monumental The Thinker, which is set within the peaceful rose garden or visit The Kiss, a marble tribute to passion and love. You can also buy a combined ticket that allows admission here and at the Musée D’Orsay.

Though it’s best known for its important art museums, Paris is home to hundreds of smaller collections covering a wide array of subjects, some of them quite esoteric. The avant-garde counterculture and penchant for sheer eccentricity that ran below the surface of Paris’s reputation as the city of the arts is told through the stories on display in Paris’s museums. They cover themes as varied as the culture of blind people, the history of stage magic, the art of hand fans, and perfumes.

Like many old European cities, Paris began as a much smaller settlement. As it grew, it absorbed the surrounding villages and towns, each of which is still traceable within the modern city. However, Baron Haussmann’s 19th-century redesign unified the cityscape of formal green spaces, wide boulevards and streets of creamy-white limestone buildings with wrought-iron balconies and mansard roofs.

The districts retain their individual personalities and are linked by boulevards and the Metro. Simply strolling through the different districts is an easy way to explore the city and in fact a quintessentially Parisian activity: this is where the idea of the flâneur — the gentleman who saunters around in a leisurely fashion, observing city life — was born. That said, guided tours can offer deeper insight.

On the left bank of the Seine, the Latin Quarter remains the core of Paris’s academia, a position it has held since the Middle Ages. The constant influx of students gives the area a youthful buzz and lots of jazz bars and dusty second-hand bookshops. Nearby, Saint-Germain-des-Prés boasts storied Art Deco coffeehouses and brasseries, notably Café de Flore, Les Deux Magots and Brasserie Lipp. They were frequented by many of the important literary figures and intellectuals of the 19th and early 20th centuries, among them Ernest Hemingway and F. Scott Fitzgerald.

Across the river, the old Jewish quarter of Le Marais is marked by the Mémorial de la Shoah holocaust museum, and the falafel shops and bakeries of the modern residents. As well as being the heart of Paris’ LGBT culture, it’s an area that’s seen much gentrification, and you’ll see many a designer boutique crammed in alongside the vintage shops and stately hôtels particuliers (mansions).

Farther to the north, Montmartre is set on the city’s highest hill (known as ‘la Butte’) and dominated by the white dome of the Sacré-Coeur Basilica. Its winding cobbled streets have attracted artists, bohemians and members of the counterculture for more than a century, including Toulouse-Lautrec and Maurice Utrillo, who painted visceral scenes of la Butte’s cabaret clubs and absinthe-soaked watering holes.

Filled with chic shopping and tourist haunts, the Avenue des Champs-Élysées is Paris’s ceremonial promenade, where the military marches on parade for Bastille Day and where the Tour de France makes its final sprint.

The street runs between the Place de la Concorde and the Arc de Triomphe. The triumphal arch celebrates Napoleon’s 1805 victory at Austerlitz and shelters the Tomb of the Unknown Soldier, dedicated to the 1.3 million French soldiers who lost their lives in World War I.

Food is a vital part of Paris life, from Michelin-starred temples of gastronomy to simple picnics with wine, bread and cheese. You can explore this remarkable bounty with tours guided by local cooks and experts.

Our guide can lead you through Saint-Germain-des-Prés, where you can sample the wares of the area’s chocolatiers and pastry chefs. Uncover the history of traditional pastries, like financier cakes or macarons, and try innovative confections like curried chocolates. Or take a tour of Le Marché d’Aligre, a small covered market frequented by locals, where you can try and buy a variety of artisanal cheeses before a guided wine tasting.

With its gold-leafed dome, sumptuous ornamentation, tree-lined esplanade and ranks of verdigris-green canons, the grandiose complex of Les Invalides looks like an imposing palace. Instead, it’s a complex comprising monuments and several different museums related to France’s military, as well as a veterans’ retirement home and hospital. The highlight of the complex is the Dôme des Invalides, a large church that houses the tombs of many French military leaders, most notably Napoleon Bonaparte’s. His oxblood-red quartzite sarcophagus lies directly under the dome’s apex.

Les Invalides was founded by Louis XIV in the 1670s as a military hospital and home for French war veterans and wounded or disabled soldiers. It still has active medical facilities and houses several dozen veterans, though the population is much reduced from the original 4,000 occupants.

Before Haussmann’s redesign, Paris retained its medieval layout and the streets were cramped, crowded and somewhat dangerous. The lack of sewer systems meant they were also noxiously filthy. In an attempt to remedy the problem, many shop owners banded together to enclose certain streets, creating private glass-covered shopping arcades known as les passages couverts (covered passages).

A few of these pedestrian arcades have survived, with their old-fashioned tile floors and glass-and-iron coverings restored. The warren offers a respite from the busy traffic outside and you can stop at cafés and browse through a quirky collection of shops that sell everything from vintage toys and stamps to walking sticks and gourmet confections.

Our itineraries will give you suggestions for what is possible when you travel in Paris, and they showcase routes we know work particularly well. Treat them as inspiration, because your trip will be created uniquely by one of our specialists.

We’ve selected a range of accommodation options for when you visit Paris. Our choices usually come recommended for their character, facilities and service or location. Our specialists always aim to suggest properties that match your preferences.

Our specialists seek out authentic ways to get to know the places that could feature in your trip. These activities reflect some of the experiences they've most enjoyed while visiting Paris, and which use the best local guides.