Largely left untouched by bombing during World War II, Bayeux is a well-preserved medieval city with an intimate atmosphere. Lording over its winding, medieval streets and waterways is the imposing Notre Dame Cathedral with its intricate façade, patinated domes, and towering spires.

The city was the original home of the Bayeux Tapestry, which depicts the Norman invasion of England in 1066. It’s located at the heart of a swirl of streets lined with traditionally Norman maisons à colombage (half-timbered houses) and quiet, paved squares.

Our specialists know this region in depth and return regularly to keep up to date on new events and openings enabling them to help you plan your trip around your interests, whether you wish to learn about the city's lace-making traditions or visit the nearby D-Day beaches.

Beyond the cathedral and renowned tapestry, I like to explore the town of Bayeux itself. It’s the only intact medieval town in the region, and its cobbled streets are packed with historic watermills, stone mansions and half-timbered houses.

Things to see and do in Bayeux

The story of the Norman invasion of England in 1066 is told in dramatic fashion in the 68 m (223 ft) long Bayeux Tapestry. The tapestry was commissioned by Bishop Odo of Bayeux, William's half brother, for the opening of Bayeux's new cathedral in 1077, and it depicts the historical events leading up to the battle as well as scenes of medieval life, mythical beasts and William's eventual victory.

What is most remarkable about this almost comic-strip-like portrayal of the battle between William and the Anglo-Saxon King, Harold, is its state of preservation. It's hard to believe looking at the vivid threads that the embroidery was hand-sewn over 950 years ago.

A textbook example of Gothic architecture at its prime, Bayeux's cathedral dates largely from the 13th century. It stands on the site of a former Gallo-Roman forum and replaced Bishop Odo's cathedral, which was largely destroyed by fire in the 12th century.

Inside you can see traces, in the crypt and the nave, of the earlier 11th-century cathedral, but the soaring roof, flying buttresses and elaborate decoration date from a variety of periods.

The cathedral construction was plagued by problems including rebellions, attack, fire and pillaging. Its central tower dates from the 15th century, while the copper dome was only added in the 19th century.

A huge plane tree, planted during the Revolution as a Tree of Liberty (following the example of the United States, on gaining independence) still spreads its branches outside the cathedral’s north face. Note the use of the Republican calendar — the months of the year were all renamed — in the plaque on its trunk.

Set in the grand former bishop's palace, the Baron Gérard Art and History Museum (MAHB) has a varied collection of European art from classical times to the 20th century. The wonderfully creative displays cover everything from ancient Roman finds to medieval and Renaissance art and local lace and porcelain.

If lace interests you, the Conservatoire de la Dentelle (Lace Conservatory), which is set in a half-timbered building opposite the cathedral, explains how the bobbin lace techniques used here were brought to Bayeux by nuns in the 17th century. You can also see demonstrations of the intricate, web-like patterns being created.

On Saturday mornings Bayeux's Place Saint-Patrice comes to life when stallholders erect bright awnings and set up their wares. This is the town's main market and features everything from local and regional wines and cheeses to fresh seafood and live poultry and game.

Along with the attractive rows of fruit and vegetables you'll also find new and used books, clothing, shoes, cut flowers and potted plants. It's a great place to pick up some Normandy cider, Calvados, local pottery or the makings of a picnic with tempting arrays of charcuterie and freshly baked breads on display.

Alternatively, it's a good spot to sample street food with crêpes, pizza and paella on offer as well as choucroute de mer, a dish of sauerkraut and fresh seafood. A smaller market is held on the pedestrian Rue Saint-Jean near the tourist office on a Wednesday morning. 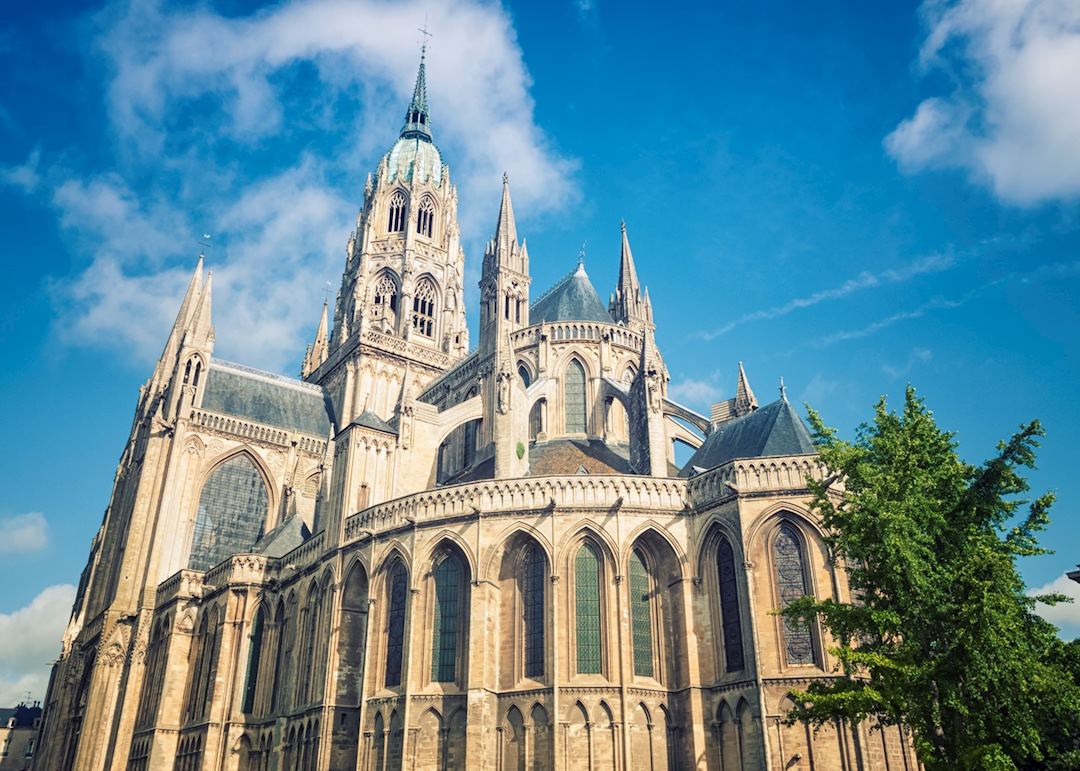 Start planning your trip to Bayeux

Our expert guides to exploring Bayeux

Written by our specialists from their own experiences of visiting Bayeux, these guides will help you make the most of your time there. We share both our practical recommendations and the best ways to appreciate Bayeux at its best.

We’ve selected a range of accommodation options for when you visit Bayeux. Our choices usually come recommended for their character, facilities and service or location. Our specialists always aim to suggest properties that match your preferences.

Our specialists seek out authentic ways to get to know the places that could feature in your trip. These activities reflect some of the experiences they've most enjoyed while visiting Bayeux, and which use the best local guides.