Flemish influences, art galleries, and nearby battlefields in Lille.

Once dismissed as a provincial backwater in the heart of French mining country, Lille today is a culturally forward-thinking, youthful yet storied city, and the fourth largest in France. Only an hour and a half by train from Paris or London, this densely populated area has almost one foot in Belgium, with its rows of red- and brown-brick, gabled townhouses and sundry other Flemish influences (beer rivals wine here). This dual identity is one of the reasons it’s a fulfilling place to explore.

As well as being a launchpad from which to visit the battlefield sites of northern France and Belgium, Lille is a destination in its own right. You can spend a relaxed couple of days here, hopping between estaminets (Flemish-style taverns), strolling the cobbled streets of the old town, Vieux Lille, and drinking in the art scene — both the Old Masters and contemporary offerings.

Things to see and do in Lille

Named officially after Charles de Gaulle but inevitably referred to by locals as the Grand’Place (main square), this huge open space is the pulsing heart of the city. It takes on many guises throughout the year: gathering point, Christmas grotto, parade ground, and open-air concert hall.

In the middle of the Grand-Place you’ll find the Column of the Goddess memorial, erected to commemorate Lille’s citizens’ stand against the Austrian army in 1792, during the French Revolution. The goddess’s curvaceous figure and appearance were allegedly a talking point for locals, as she bore an uncanny resemblance to the then-mayor’s wife...

On one side of the square stands an imposing, maroon-and-mustard-yellow Flemish Renaissance building, the Vieille Bourse. A former stock exchange, its Renaissance cloister now hosts second-hand booksellers selling not just books but vintage comics and a whole host of print material. You might see chess-playing locals, street musicians, and even tango dancers.

Pass through to the eastern side of the Vieille Bourse and you emerge on Place du Théâtre, the start of Lille’s old town proper. This second, slightly smaller square is overlooked by a neo-Flemish clocktower, a gilded, top-heavy popinjay that can be seen from everywhere in the city. Also on this square you’ll find the city’s neo classical opera house and the neo-Flemish Chambre de Commerce.

A fairytale-like Belle Epoque château houses Lille’s most prominent arts museum, the Palais des Beaux Arts. Containing items sequestered by Napoleon from around his empire, the Palais today is considered France’s second museum after the Louvre. Its walls are lined with (appropriately enough) several Flemish Old Masters, including Rubens and Van Dyck, but there’s also a corridor dedicated to the Impressionists.

In the northern reaches of the city at Roubaix, you’ll find la Piscine Musée d'Art et d'Industrie, where fine art and sculpture are housed in a renovated Art Deco swimming pool, the sculptures reflected strikingly in the still waters of the former pool.

Elsewhere in the city you’ll find a vibrant, emerging contemporary art scene, with installations and galleries cropping up in converted textile warehouses, breweries, and freight-train stations.

Lille is a leafy city, and you’ll come across pockets of green space dotted liberally throughout the central districts. Just outside the old town lies Jardin Vauban, a landscaped garden complete with grotto and waterfall, and behind it, Parc de la Citadelle. This vast public park houses an imposing star-shaped military fortress originally commissioned by Louis XIV. It’s still a working garrison.

Lille’s proximity to the Flanders region of Belgium and to the Somme area of Picardy, northern France, have made it a good jumping-off point if you’re looking to visit World War I battlefield sites. Located about 45 minutes by road from Lille, the Somme battlefield site is a large one. Its many memorials include the Thiepval Memorial to the Missing, preserved trenches and the great abyss of Lochnagar Crater. Lille is also roughly 45 minutes away by road from Ypres, another focal point of World War I battlefield tours, where you’ll find the Menin Gate Memorial along with other Commonwealth memorials and an American cemetery.

Like many French cities, Lille is a pleasant place to travel all year-round, its character changing with the seasons. However, we think spring (March to May) or early summer (June) is ideal, as this is when the city’s many gardens and green spaces will be at their finest. 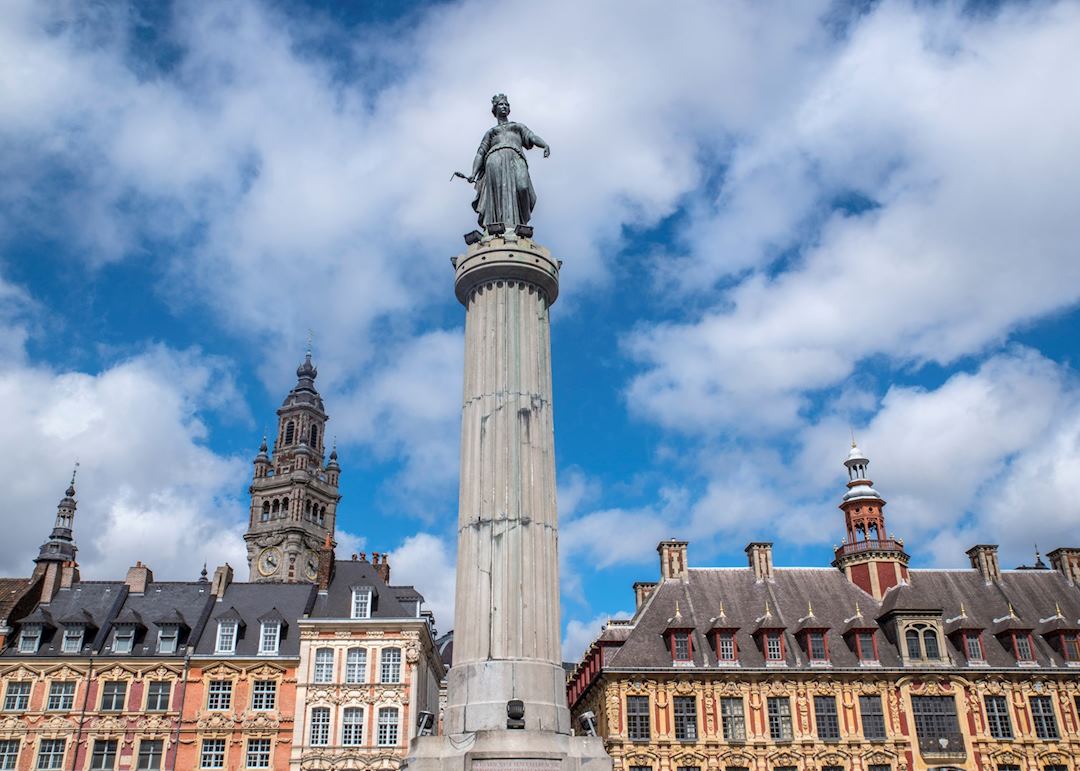 Start planning your trip to Lille

We’ve selected a range of accommodation options for when you visit Lille. Our choices usually come recommended for their character, facilities and service or location. Our specialists always aim to suggest properties that match your preferences.

Our specialists seek out authentic ways to get to know the places that could feature in your trip. These activities reflect some of the experiences they've most enjoyed while visiting Lille, and which use the best local guides.