Half-timbered houses, a Gothic cathedral, and storied vineyards, all in Colmar

The architecture of Colmar is like a storybook recreation of an early Renaissance village. You’ll find cobbled alleys, meandering canals, intricate yellow-and-orange brickwork, and half-timbered houses with brightly painted façades, as well as a soaring 13th-century Gothic church. In fact, the city is so beautiful that during both world wars, the British and American forces deliberately avoided bombing it. As a result, it has one of the best-preserved old towns in France.

Colmar is also perfectly placed as a base for exploring the many vineyards that fill the countryside of Alsace (known officially as Grand Est). We can arrange for private tours along the Alsace Wine Route, known primarily for its riesling and gewürztraminer.

Despite these many charms, few international visitors make the trip here and you’ll find the streets much quieter than in many other French towns and cities.

Things to see and do in Colmar

Wandering the old town, you might be forgiven for imagining you’d stepped back in time. The plaster of the half-timbered buildings is painted in an array of chalky yellow, bright orange, cheery pink, and sky blue, which all contrasts cheerily with the overflowing blooms that fill window boxes during the summer.

During the Middle Ages, Colmar was a member of the Décapole, a league of Alsatian cities that banded together to create a trading alliance based on the region’s already-renowned vineyards. The resulting wealth caused a building boom and local tax laws encouraged the tall narrow buildings you can still see and visit today. We suggest allotting at least one full day to simply stroll through the cobbled streets and over the crooked canals to soak up the man-made beauty.

Topped with a Mongol-inspired copper spire, this massive Gothic church dominates the main square of the town. Despite the square’s name — and the great size of the edifice — the church has only been an official cathedral for ten years of its eight centuries.

Typical of Gothic architecture, the airy, soaring interior draws your eye up toward Heaven with its massive pillars, pointed arches, and vaulted ceiling. However, don’t let the lines of the space distract you from the delicate medieval statuary and gloriously kaleidoscopic stained-glass windows. We can arrange for you to explore the church — and the rest of the old town — as part of a privately guided walking tour.

Running from Marlenheim in the north to Thann in the south, the Alsatian Wine Route is the oldest wine route in France. Its 170 km (105 miles) wends its way through a rolling landscape of half-timbered villages, medieval castles, and, of course, vineyards. The region includes seven different grape varietals, including riesling, gewürztraminer, and pinot noir, most bottled in the slim, green-glass ‘Alsatian flute’.

In Alsace, unlike the rest of France, the wineries are in the villages rather than the vineyards. This is a consequence of the region’s often-turbulent history on the border — growers preferred the security of town walls. You can learn about the area’s history and how it’s affected wine production on a private driving tour along sections of the route — with ample stops for tastings.

As in nearby Strasbourg, the best time to visit Colmar is spring and summer, when you can enjoy wine tasting in the beautiful weather. That said, autumn brings lovely foliage and a plenitude of wine harvest festivals. Additionally, in December, the town’s Christmas market transforms the historical buildings and main square into a picture-book setting. 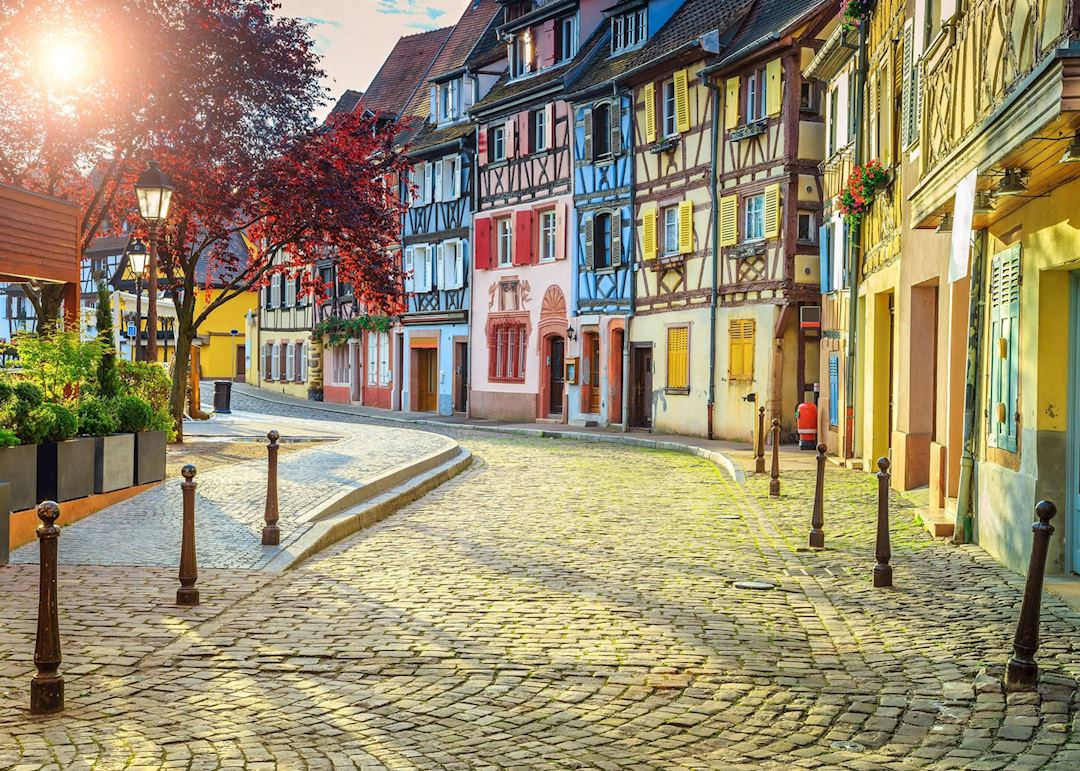 Start planning your trip to Colmar

We’ve selected a range of accommodation options for when you visit Colmar. Our choices usually come recommended for their character, facilities and service or location. Our specialists always aim to suggest properties that match your preferences.

Our specialists seek out authentic ways to get to know the places that could feature in your trip. These activities reflect some of the experiences they've most enjoyed while visiting Colmar, and which use the best local guides.