Once known as a major player in the global silk industry, Lyon is today considered the gastronomic capital of France, its medieval and Renaissance houses acting as gourmet shops and Michelin-starred restaurants. The city sits at the confluence of the Rhône and Saône rivers and was first settled by the Romans. Now, it’s France’s third-largest city and renowned for its fine food, architecture and lively cultural scene. It’s a great city to explore on foot, with the old town brimming with shops, cafés and restaurants, grand Parisian-style buildings and cutting-edge design.

I love Lyon for its blend of history and food. There’s nothing like sitting outside at one of the city’s bouchon eating local specialties such as saucisson chaud, quenelles, or salade Lyonnaise.

Things to see and do in Lyon

A textile hub since the 15th century, Lyon had become the main player in the European silk trade by the 18th century. Rapid development saw the city triple in size, and in its heyday an estimated 100,000 weaving looms operated here.

In the districts of Vieux Lyon and La Croix-Rousse, you can walk through the traboules, a series of hidden narrow passageways that wind between the old stone buildings and around inner courtyards, and once provided quick access for merchants to pass between the old town’s parallel streets. The system of covered lanes also allowed silks to be transported without getting wet. In total, there are 315 passageways, a network that proved equally useful to the French Resistance in World War II.

La Croix-Rousse is the old silk weavers’ district and runs up the slopes of the hills at the northern end of the Presqu’île, Lyon’s central area. Independent from the city until 1852, it still has a bohemian atmosphere and holds regular open-air events in leafy Place Bertone.

You can visit several historical silk weavers’ workshops here and hear about the appalling conditions the weavers worked in, the types of looms they used and the fabrics they produced.

At the Maison des Canuts (House of the Weavers) you can see the technical, social and creative influence the weavers had on the city, while two workshops — the Atelier de Passementerie and Atelier de Tissage — still have working looms.

Two thousand years ago, the Romans built a settlement called Lugdunum on the slopes of Fourvière, a hill overlooking modern-day Lyon. Significant traces of their exploits remain, and an archaeological museum explains their activity here with exhibitions of ancient finds and impressive mosaics. But, most remarkable of all is the large Roman amphitheatre that the museum overlooks.

Built in about 15 BC and enlarged in 120 AD, the amphitheatre sat an audience of 10,000 and is surprisingly well preserved. Alongside is the smaller odeon built in the 2nd century and used for musical performances. Each June and July, the Nuits de Fourvière festival takes place here, putting on a series of dramatic, musical, circus and dance performances, both classical and contemporary.

Head upward from the amphitheatre along narrow, winding roads until you reach the summit of the hill, where you’ll find the 19th-century Basilique Notre Dame de Fourvière. The church is dedicated to the Virgin Mary, who’s credited with saving the city from the plague, cholera and even a Prussian invasion.

Inside, fine stained glass and mosaics decorate the Romanesque and Byzantine-style interior. Even more impressive is the view from the rooftop with the entire city laid bare before you.

You can walk up the hill to the basilica on a series of footpaths, but it’s easier to take the funicular to the top and walk down.

Local chef Paul Bocuse, father of the nouvelle cuisine movement, played a large part in Lyon’s transformation into the gourmet capital of France. His creative bistros championed a lighter version of traditional French cooking and put an emphasis on fresh ingredients and considered presentation.

Bocuse’s influence spread and Lyon soon became renowned for its fine dining. Today, the indoor food market, Les Halles de Lyon-Paul Bocuse, is named after him and has an international reputation. Come here to seek out regional cheeses, artisanal breads, fresh shellfish and choice cuts of meat. Later in the day, you could try one of Lyon’s many Michelin-starred restaurants or, as a worthy alternative, a ‘bouchon Lyonnais’, a more casual traditional restaurant serving regional delicacies.

Lyon is a good year-round destination. The city is best enjoyed on foot, making the warmer months of May to October more conducive to outdoor exploration. December is also a highlight, with the city’s Fête des Lumières (Festival of Lights) illuminating the many grand buildings around the heart of the city. 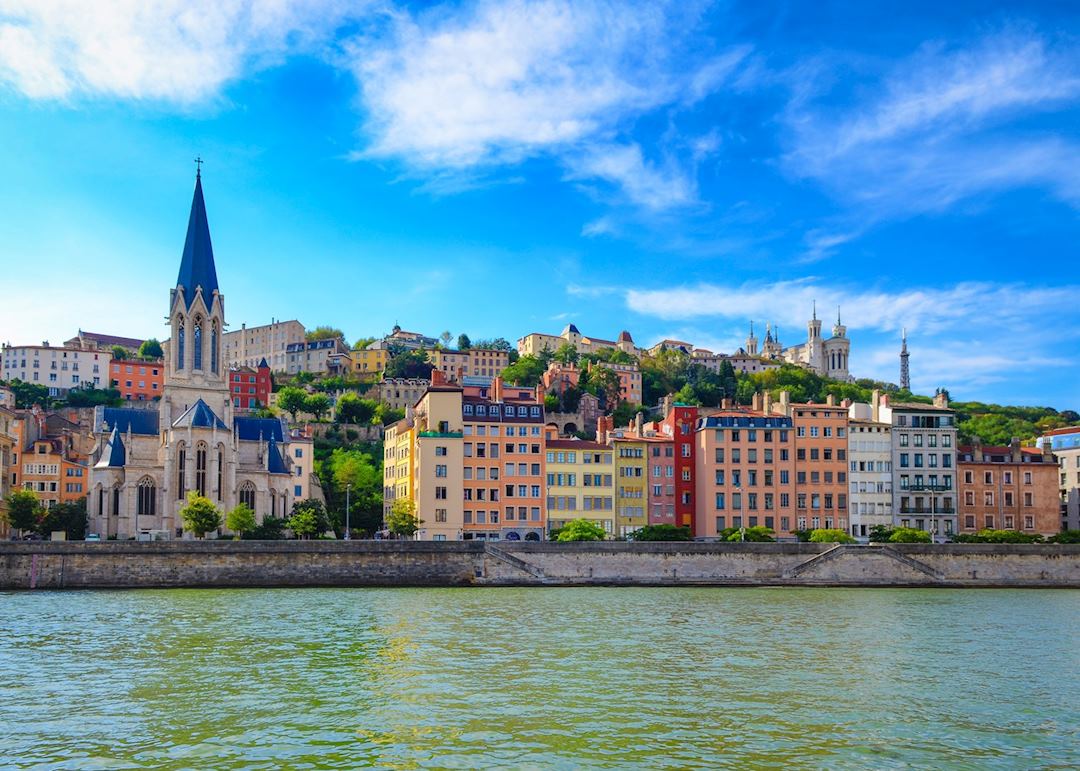 Start planning your trip to Lyon

We’ve selected a range of accommodation options for when you visit Lyon. Our choices usually come recommended for their character, facilities and service or location. Our specialists always aim to suggest properties that match your preferences.

Our specialists seek out authentic ways to get to know the places that could feature in your trip. These activities reflect some of the experiences they've most enjoyed while visiting Lyon, and which use the best local guides.