A young and dynamic city offering French sophistication, cutting-edge innovation and a wealth of Neoclassical architecture, Bordeaux is the capital of Nouvelle Aquitaine and the hub of an extensive wine region. It’s also the world’s largest urban World Heritage Site with wide boulevards flanked by grand 18th-century mansions, grandiose squares, a colonnaded Grand Théâtre (which hosts numerous prestigious ballets and operas) and several good museums. Pedestrian-only streets and a high-tech public tram system make it easy to explore, while cruises along the Garonne River take visitors out into the rolling countryside to the extensive fields of vineyards and chateaux that surround the city.

For me, the most interesting aspect of Bordeaux is its people. Everyone seems to be a wine expert, but they’re more than willing to share their knowledge in a way that’s accessible and fun.

Things to see and do in Bordeaux

Approximately half of Bordeaux is protected as a World Heritage Site but its most renowned address is the Place de la Bourse, a grand, Neoclassical riverside square. The city’s medieval walls were razed to create this public space between 1730 and 1775 and it’s flanked on three sides by the palatial Hôtel des Fermes and the Palais de la Bourse, which housed the city’s tax and shipping exchanges. Imposing buildings decorated with macarons (carved stone faces) and ironwork, they now overlook the 19th-century Fountain of the Three Graces, while across the road, the miroir d’eau (water mirror) perfectly reflects the buildings.

Head into the city from Place de la Bourse and you’ll quickly arrive at Bordeaux Cathedral. Construction began in 1096 and 13-year-old Eleanor of Aquitaine and Louis VII, the future king of France, were married here in 1137. Although most of what you can see today dates from the 14th and 15th centuries, one of the original Romanesque walls survives in the nave. The north façade is the most impressive, its ornate twin towers soaring into the sky against a backdrop of flying buttresses. The elaborate 15th-century free-standing bell tower, Tour Pey-Berland, provides panoramic views over the city from the top.

Far more than a wine museum, La Cité du Vin is a high-tech exploration of the art of winemaking across the ages and the globe. Holograms, audio hot spots and light-and-sound shows bring the history, heritage and significance of wine to life as you explore vineyards across the world, maritime trade routes and the connection between wine, religion and the arts. It’s all set in a curvaceous waterfront building clad in shiny glass and aluminium panels. Regular workshops, events and shows expand the offerings of the permanent and temporary exhibitions, while the shop, which stocks 800 wines, and the wine culture library should satisfy even the most discerning wine lovers.

Wine cruise on the Garonne River

A leisurely way to explore Bordeaux and get a feel for its history and the importance of the wine trade here over the centuries is to take a cruise along the Garonne River. During the 90-minute trip, you’ll pass the Bordeaux quays which are intimately linked with the surrounding vineyards as well as the city’s fortunes. A guide will give a commentary on the importance of the trade to the city and explain particular points of interest as you pass. En route, you’ll have a tasting of two local wines, specially chosen to demonstrate the variety of labels available in the region.

The Bordeaux wine region is arguably France’s most important producer of quality wines and boasts over 5,000 chateaux where grapes are raised, harvested and processed. The city acts as a hub for the nearby Médoc and Saint-Émilion wine regions, located to the north and east of the city respectively. The Médoc sits along the Gironde Estuary and is home to the world-renowned Haut-Médoc, Margaux and St-Julien appellations. Saint-Émilion by comparison, is a medieval hill town of cobbled streets and chic shops that is the hub for a celebrated wine region with sweeping views of the Dordogne Valley. Both regions are possible to visit in a day from Bordeaux.

June to August brings pleasant weather and the chance to visit when the wine region is at the height of the growing season. Between September and October the grapes are harvested. Some chateaux still welcome visitors during this busy season allowing the opportunity to watch this part of the winemaking process unfold. 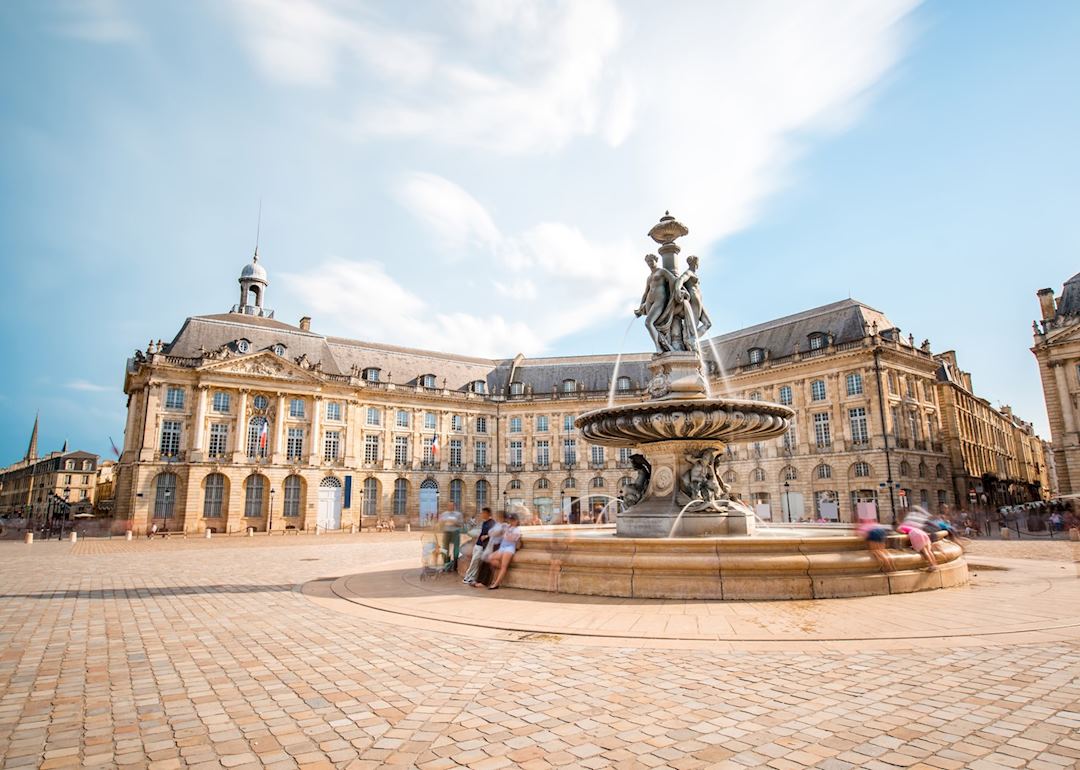 Start planning your trip to Bordeaux

We’ve selected a range of accommodation options for when you visit Bordeaux. Our choices usually come recommended for their character, facilities and service or location. Our specialists always aim to suggest properties that match your preferences.

Our specialists seek out authentic ways to get to know the places that could feature in your trip. These activities reflect some of the experiences they've most enjoyed while visiting Bordeaux, and which use the best local guides.