Basque culture, golden beaches, and an imperial legacy, all in Biarritz.

Wide golden beaches, grand architecture, and an imperial history have combined to make this one of the most glamorous stops on France’s Atlantic coast. Once a small Basque whaling town, Biarritz became a popular playground for the rich and famous when royals like Queen Hortense and Napoleon III summered here.

For more than a century, European monarchs, aristocrats, and other members of the glitterati flocked here to enjoy the town’s six beaches, ocean views, and casinos. They left behind a legacy of exceptional architecture that you can explore, including Belle Époque, Art Deco, and even a bridge by Eiffel. This is also a popular destination for surfers, who come to take advantage of the rolling Atlantic waves.

Things to see and do in Biarritz

The beach and promenade are where the bronzed and the beautiful go to mingle, so can get a bit crowded during the warmer months. It’s also a popular destination with surfers, here for the Atlantic rollers. But there’s a certain old-fashioned pleasure in renting striped beach umbrellas and 1920s-style deck chairs and enjoying the views. Or visit during the cooler months to have the beach all to yourself.

Hortense’s son-in-law, Napoleon III, visited the city for the first time shortly after his marriage to Eugénie. He was so enchanted by the Grande Plage and the region’s charms that he commanded a palace compound to be built. The palace was badly damaged in a 1903 fire and rebuilt as the grand Hôtel du Palais.

The city had the foresight to buy the palace when it closed briefly in the 1950s, a victim of shifting winds of fashion. Today, it’s a lavish resort with bars and eateries fit for an empress. Even if you’re staying elsewhere, we suggest taking time to enjoy a drink or meal here.

Basques are a people without a nation, inhabiting a region that spans both France and Spain, including Biarritz and nearby San Sebastián. Basque culture spices every aspect of life in the city — you’ll hear Euskara (the Basque language) spoken alongside French and the Basque sport of pelota is a popular pastime.

The local cuisine, too, bears a Basque accent. You’ll find bright-red Espelette peppers at the heart of many local Basque dishes, including axoa de veau (veal and pepper stew). In the early summer, look for black cherries from Itxassou, a small village renowned for its orchards.

If you’re going for the beaches, as most do, plan to visit between May and September, when you’ll have the best chance of warm weather and blue skies. 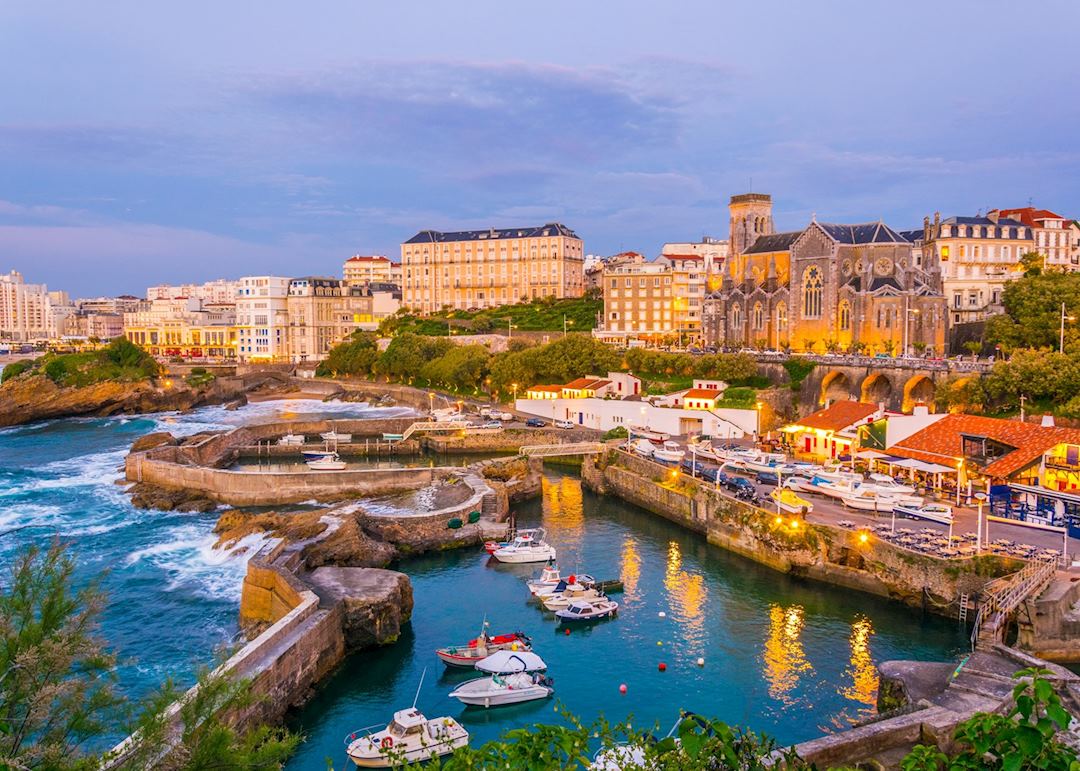 Start planning your trip to Biarritz

We’ve selected a range of accommodation options for when you visit Biarritz. Our choices usually come recommended for their character, facilities and service or location. Our specialists always aim to suggest properties that match your preferences.