Pared back, modern design, a convenient location and excellent value for money make the Harbour Hotel Galway City a good choice. It is located in the city's modest port area just a short walk from the heart of the city where you can find Galway's renowned pubs, eateries and independent shops as well as the historic Claddagh district.

This contemporary property has bright, open, uncluttered spaces styled with cheery hues such as purples and greens, and boasts spacious rooms designed in a comfy but minimalist style. There’s a relaxed in-house restaurant serving dishes made with fresh, local ingredients, as well as a bar offering lighter dishes and an extensive drink list. Afternoon tea is also available in the modern lobby. 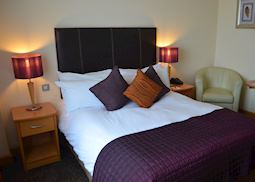 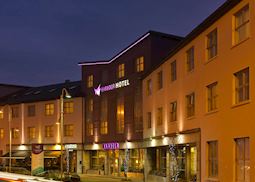 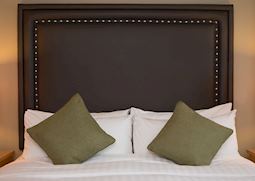 While simple in design, rooms are spacious and comfortable. They are decorated in a stylish contemporary manner with bright tones prominently set against crisp white linens. The style of the rooms could be described as comfy minimalism, with an uncluttered but inviting style. All rooms feature complimentary Wi-Fi, plasma screen TVs and compact bathrooms with a shower over the bath. Superior and executive rooms are more generously sized and come with larger bathrooms.

Situated in Galway’s port area, the Harbour Hotel Galway City is about a five to ten minute walk to Eyre Square, the city's commercial hub. Galway's pedestrian core of charming narrow streets lined with independent cafes, eateries and shops, as well as the historic Claddagh and Spanish Arch are also about five to ten minutes away on foot.

A full Irish breakfast as well as an array of hot and cold dishes are served in a relaxed atmosphere at the Harbour Restaurant. Bar food is available from noon and later, a full evening menu featuring freshly caught seafood and locally-sourced dairy and meats. Guests can also take part in whiskey tastings guided by an in-house expert.

Afternoon tea is served by an open fireplace in the light-filled contemporary lobby.

This is a contemporary, well-styled and great value option just a short walk from popular Quay Street.