Ireland’s most northerly county is a wild and rugged place, where the raw beauty of the landscape lingers far longer in the memory than the towns. Known for its long, sweeping beaches, heather-clad mountains, precipitous cliffs and network of ancient monuments, it’s somewhere you can explore back roads, cliff paths and coastal trails as you search for stone circles and famine sites, historic castles and walled gardens. Its remote location and relative isolation have made it a bastion of traditional culture, with one third of Donegal a Gaeltacht (Irish-speaking region). Traditional music and dance remain a thriving part of everyday life.

I love County Donegal because it’s almost entirely untouched by visitors. The Slieve League cliffs are almost three times higher than the better-known Cliffs of Moher, but receive just a tiny fraction of the visitors.

Things to see and do in County Donegal

More than anything else, Donegal is known for its scenery. Along the wind-battered coastline lie huge stretches of often-deserted golden sands.

Portsalon and Ballymastocker Bay on the shores of Lough Swilly are popular spots, Malin Head and Culdaff Bay on the Inishowen Peninsula are a little wilder, and in-between lie many hidden coves and bays.

Inland, mountains, forests and waterfalls reward hikers. Pyramidal Errigal, at 751 m (2,464 ft), is the county’s highest peak. At its foot lies the Poisoned Glen and Lough Dunlewey, while the winding road through the Glengesh Pass is flanked by steep slopes, old cottages and sheep farms.

Donegal’s most lauded natural wonder is the Slieve League Cliffs. Nearly three times the height of the Cliffs of Moher in Clare, the rock face here plunges 600 m (1,969 ft) into the waiting ocean.

Views stretch as far as Sligo, Leitrim and Mayo, and you can see an early monastic settlement with beehive huts and a small chapel on the higher slopes.

A longer, more adventurous walk takes you along the vertigo-inducing One Man’s Pass, which offers views from a knife-edge ridge along the highest point in the cliffs.

All along the coastline, and in the hills and mountains, Donegal’s landscape lends itself to outdoor adventure. You can hike or bike along the well-marked network of coastal and mountain trails, as well as go sea kayaking or fishing. Surfing is a popular pursuit here, which you’ll see in evidence as you explore.

You can also take boat trips along the base of the Slieve League Cliffs, with a chance to see dolphins, whales, seals or even basking sharks.

Unsurprisingly, Donegal’s rugged landscape offered a safe haven for warring chieftains from the earliest times. Its fields and shores are scattered with ancient monuments and early Christian sites, with the hilltop fort of Grianán of Aileach the best-known of all.

This large, circular stone fort, which dates from around 1700 BC, was made in three concentric terraces surrounded by ramparts. It has been completely restored and gives you impressive views over Lough Swilly and Lough Foyle.

You’ll get more fine views from the Bocan Stone Circle, which dates back about 5,000 years, and the larger Beltany Stone Circle. Another worthy visit is the 7th-century Saint Patrick’s High Cross in Carndonagh, which is ornately carved and flanked by two stone pillars decorated with biblical figures.

In the mountainous valley of Glenveagh, oak and birch forest, blanket bog and glittering lakes present you with rewarding walking, cycling and fishing. Golden eagles fly overhead, and red deer roam the forests.

The park’s wild scenery sits in stark contrast to that of Glenveagh Castle, a 19th-century structure modelled on Balmoral Castle in Scotland. The brainchild of John George Adair, it is flamboyantly decorated inside and has attracted many famous visitors, including Greta Garbo.

Outside, you can stroll in the walled and Italian gardens, as well as the pleasure grounds. The Glenveagh Visitor Centre has a display on the ecology of the park and the history of the castle, and runs ranger-led walks of the woodlands.

A museum based around what was until the 1980s a living community, the Doagh Famine Village tells the story of one Donegal family and their struggle to survive through Ireland’s potato famine, the peace process in Northern Ireland, and the recent boom and bust of the Irish economy.

You’ll hear about events leading up to the famine and how it affected the county and its people. You can also visit the village’s original thatched cottages and learn about evictions, Irish wakes, hedge schools and mass rocks — stones that served as altars for secret worship at a time when priests were being driven from the country.

Tucked away in a corner of Ireland and relatively isolated from the rest of the country, Donegal developed its own creative industries to bring in work and make the most of natural resources.

Tweed has been produced here for centuries, and at the Donegal Tweed Visitor Centre in the handsome village of Ardara you can see weavers working on looms and visit a replica weaver’s cottage.

Another good place to visit is the Donegal Craft Village in Donegal town, a contemporary arts and crafts hub with studios showcasing glass, bronze, textiles, woodwork and metalwork.

County Donegal makes a great destination year-round, but the beaches, gardens and mountains are at their finest between May and September when fair weather encourages hiking, water sports and exploring.

Late August is particularly impressive, with purple heather cloaking the mountains and fuchsias blooming along the hedgerows.

In winter, wild weather and snowy mountains bring the region’s harsh beauty to the fore. 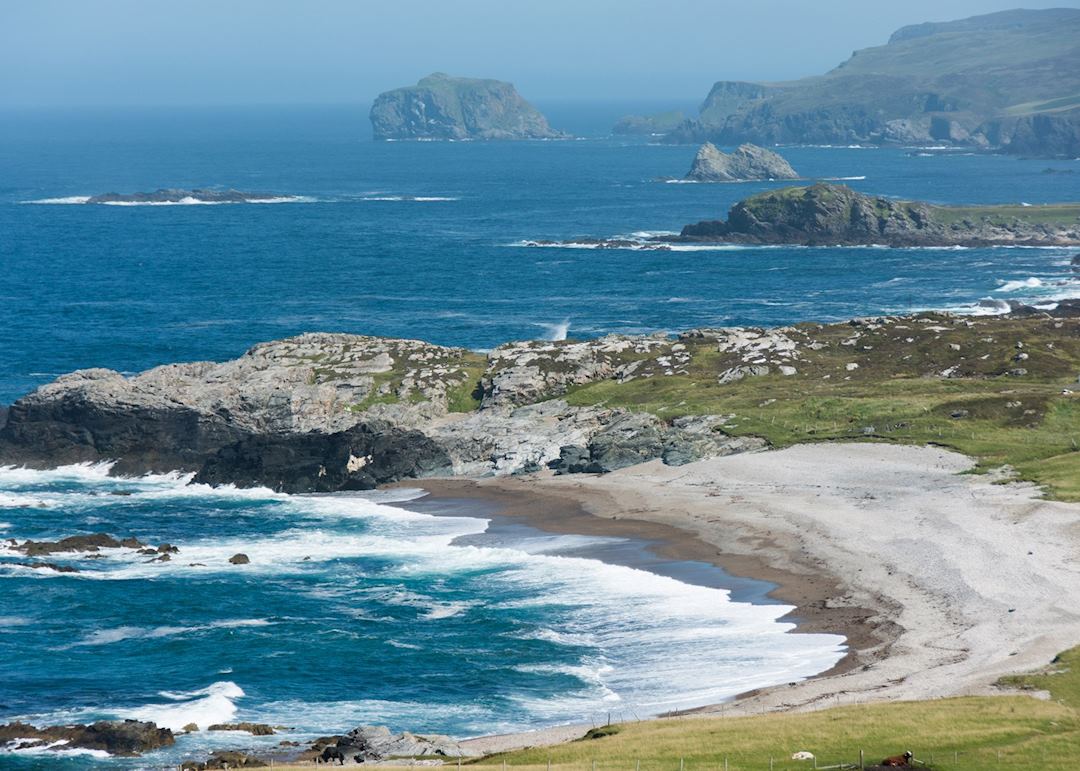 We’ve selected a range of accommodation options for when you visit County Donegal. Our choices usually come recommended for their character, facilities and service or location. Our specialists always aim to suggest properties that match your preferences.

Our specialists seek out authentic ways to get to know the places that could feature in your trip. These activities reflect some of the experiences they've most enjoyed while visiting County Donegal, and which use the best local guides.