Often plagued by rain, Galway is yet somehow bright and cheerful even under the greyest of skies. Winding medieval streets run through the compact heart of the city and are lined with brightly painted cottages now converted into cafés, bars, restaurants and shops.

Despite exhibiting a contemporary, bohemian style, Galway is also the most Irish of cities and you'll hear the Irish language spoken on its streets. Just outside the city limits lies Connemara, a region of dramatic beauty and the country's largest Gaeltacht (Irish-speaking region).

Galway is a port town that feels more like a friendly fishing village. In the evenings, pick a pub — any pub — and you’ll find Irish-speaking locals, students and visitors mingling, and carousing to traditional Irish folk music.

Things to see and do in Galway

Galway's undeniable charm comes largely from its meandering, traffic-free medieval streets where the atmosphere is always jovial. The lively, free-spirited nature of the area, and its brightly painted buildings, and many cafés and restaurants with outside seating give it something of a celebratory mood with a constant stream of street performers and buskers providing entertainment.

Shops selling tweeds, knitwear, traditional musical instruments and contemporary Irish crafts pour out onto the streets, groups of friends chat on corners and everywhere you go traditional music seems to seep from behind the doors of traditional pubs.

The Normans built defensive walls around Galway in about 1270, protecting the city from attack and ensuring only the leading de Burgo family and its allies could live there. In 1396, Richard II transferred power to 14 merchant families, who developed a roaring trade with Spain and Portugal.

The Spanish Arch, which dates from 1584, was an extension of the city walls built to protect ships as they unloaded their precious cargo. Fish markets were also held here with local people from the nearby fishing village of Claddagh trading their catch just outside the city walls. Today, two arches remain set beside the river rapids, at the head of an open space where you can sit on the grass or the river wall.

Galway's leafy central square is dominated by the stately bulk of the Victorian Hotel Meyrick (formerly one of the great railway hotels) and surrounded by predominantly Georgian buildings. It's a wide, open space popular for picnics and lazy lunches in the summer months.

The 17th-century Browne's Doorway, the remains of one of the city's medieval merchant’s houses, sits at the northern end of the square near a fountain depicting a Galway hooker, the traditional fishing boat with deep red sails used in Galway Bay. Around the square are the city's busiest streets and shopping areas, along with some fragments of the medieval city walls.

John F Kennedy visited Galway and made a speech in the square a few months before his assassination. In tribute to the president and this event, the square was renamed John F Kennedy Memorial Park in 1965 (although it still mainly goes by the name Eyre).

Set at the mouth of the River Corrib, Galway began life as a fishing village and was captured and then fortified by the Normans in the 13th century. The city prospered and became a bustling sea port, building up a huge trade in wine and salted fish with Spain and Portugal.

Outside the city walls, in an area known as the Claddagh, the original fishing village remained, its residents supplying the city with fish and seafood. The thatched cottages and cobbled streets of the Claddagh were demolished in the 1930s, but the village's most well-known export, the Claddagh ring, is still made in the city. 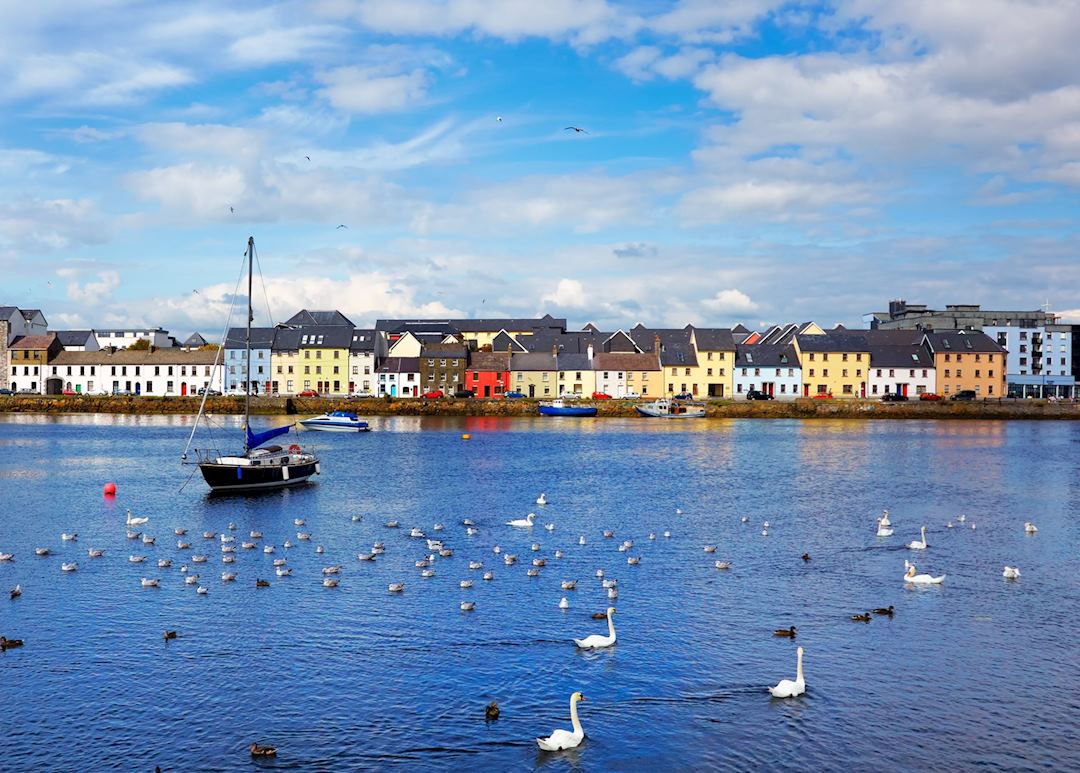 Start planning your trip to Galway

We’ve selected a range of accommodation options for when you visit Galway. Our choices usually come recommended for their character, facilities and service or location. Our specialists always aim to suggest properties that match your preferences.

Our specialists seek out authentic ways to get to know the places that could feature in your trip. These activities reflect some of the experiences they've most enjoyed while visiting Galway, and which use the best local guides.