One of Ireland's most vibrant and characterful cities, Kilkenny is known for its medieval history and thriving arts and culture scene. Along with a Norman castle and Gothic cathedral, you'll find ruined abbeys and meandering lanes where traditional pubs sit next to gourmet restaurants and contemporary art galleries.

Live music spills onto the streets, artists, designers and craftspeople flock here, and the city's many festivals create a celebratory mood. Although referred to as a city, Kilkenny is relatively small. All the major attractions lie along the city’s Medieval Mile, which stretches north from Kilkenny Castle to Saint Canice’s Cathedral.

Kilkenny was founded in the 6th century as a monastic settlement. It was walled by the Normans and, by the Middle Ages, was the unofficial capital of Ireland. Dominating the town is Kilkenny Castle, a colossal waterside fortress built to guard the crossing of the River Nore. The site was first fortified in the 12th century but over the years was attacked, rebuilt, expanded and remodelled. Today’s rendering displays a variety of architectural styles.

Three of the original four towers survive, but much of the present castle dates from the 19th century. The interior is predominantly Victorian in style with gilded plasterwork, hand-painted Chinese wallpaper and tapestries lining the walls. You can visit the library, drawing room and bedrooms, as well as two galleries that host changing exhibitions of contemporary art.

Ornamental gardens surround the castle and the former stables play host to the Kilkenny Design Centre and the National Design & Craft Gallery, which showcase work by Ireland's foremost artists and craftspeople.

Anchoring the far end of the Medieval Mile is Gothic Saint Canice's Cathedral. It’s built on the site of an early Christian monastery founded by Saint Canice, Kilkenny's patron saint. The current church dates from the 13th century but has undergone major repairs since due to structural problems and the damage done by Oliver Cromwell when he stabled his horses here in 1650.

Inside, you'll see many tombs and grave slabs of the powerful Butler family who lived in the castle for 600 years. There are also two windows by the Harry Clarke Studio (leading exponents of the Arts and Crafts Movement), and a model of Kilkenny in 1642, which shows how little the city has changed. Climb to the top of the 1st-century round tower on a series of steep ladders for panoramic views of the city.

Visible from all around the city is Kilkenny's Catholic cathedral, Saint Mary's, which dates from the 19th century and is built in neo-Gothic style. Its soaring nave is particularly impressive, along with its intricate mosaic work and original stained glass. The main altar is of white Italian marble, while the polished limestone altar under the great tower is surrounded by copper reliefs depicting church life in the diocese.

Kilkenny's Dominican Black Abbey was founded in 1225 by William Marshall, Earl of Pembroke. Its name stems from the black habits of the Dominican friars. Much of the current building dates from the 18th and 19th centuries, but you can still see sections of the original building in places as well as a set of vivid stained glass windows.

On the site of another ancient abbey is the Smithwick’s Experience. John Smithwick opened a brewery here in 1710, on the site of a Franciscan abbey where monks had brewed ale since the 14th century.

Although production on the site has now ceased, you can tour the old brewery to learn about its 300-year history. Along with hearing about the Smithwick story and the production process, you'll get to mill the malt, stir the mash and taste a choice of Smithwick ales, which are now produced in Dublin.

Kilkenny also dominates the Irish game of hurling, a source of fierce pride for the city. Hurling resembles a type of airborne hockey and has been played in Ireland for more than 3,000 years. It's thought to be the fastest field sport in the world, and it's well worth catching a game during your visit. The main season runs from April to October.

More than anything else, though, Kilkenny is probably best known today for its crafts, its festivals and its vibrant atmosphere. Strolling the streets and 17th-century lanes past brightly painted shopfronts, Georgian houses, time-worn pubs and a host of lively eateries and galleries, you can't help but notice Kilkenny's buzz. Festivals of arts, film, literature and music are held year round, the most popular of which are the Cat Laughs Comedy Festival in early June and the Kilkenny Arts Festival in August.

Although Kilkenny makes a good year-round destination you’ll get warmer and drier weather from May to September. It’s also the best time of year to catch a hurling match or attend one of the many local festivals. 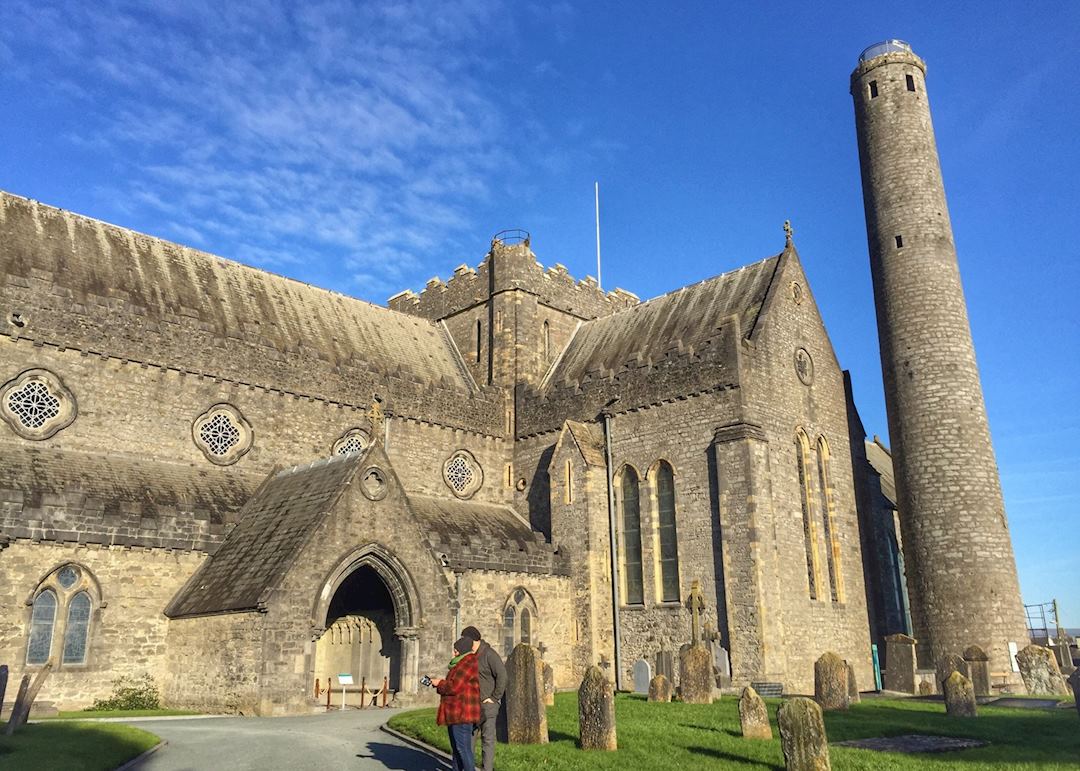 Start planning your trip to Kilkenny

We’ve selected a range of accommodation options for when you visit Kilkenny. Our choices usually come recommended for their character, facilities and service or location. Our specialists always aim to suggest properties that match your preferences.

Our specialists seek out authentic ways to get to know the places that could feature in your trip. These activities reflect some of the experiences they've most enjoyed while visiting Kilkenny, and which use the best local guides.