I’m yet to meet anyone who has journeyed to Japan and not fallen in love with it. The country appears to have a magical draw that leaves a lasting impression on its visitors.

For honeymoon couples, Japan provides a cultural adventure. If you would like to spend the whole of your post-wedding getaway relaxing on white sand then Japan isn’t for you (although it’s home to some fantastic beaches).

What it does offer is deeply rooted history and traditions – where else could you learn the arts of the tea ceremony, kimono wearing and samurai sword fighting? Juxtapose this with ultra-modern cities, dramatic mountain scenery and culinary experiences to rival anywhere in the world, and you have Japan.

Japan makes a great honeymoon destination if you have one week or two. Nine days is enough to explore Tokyo and Kyoto, while in a two week trip you can extend your journey to cover more of the country.

Stay in a traditional ryokan

The concept behind the ryokan, a Japanese inn, is a very simple one – it’s a home from home, Japanese style – but it can also be a wonderful eye-opener to the authentic delights of the Japanese way of life. Most ryokans are small and family-run, and many provide the intimate stay that honeymoon couples so often seek.

The personal service you receive in a ryokan is impeccable. As part of your stay, your evening meal is included, usually served in the privacy of your room. Food is normally kaiseki style (a banquet of little dishes), locally sourced, beautifully presented and often based on the seasons. Dishes include homemade pickles, vegetable tempura, rice, miso soup, as well as raw and cooked fish dishes, and meat you cook yourself at the table on a small hot stone barbecue.

Some ryokans also have private onsens, hot spring baths. Immersing oneself in the warm water is a popular Japanese pastime. Normally bathing is communal, and men and women will be separated as it’s customary to enter nude. However, in ryokans such as the Hakone Ginyu in the Hakone National Park, about one and a half hours from Tokyo by train, you can enjoy the exclusivity of your personal onsen attached to your room.

The Hakone Ginyu has only 20 rooms, each individually designed and all with views over the sweeping valley (not to mention private onsens). This is an intimate and welcoming stay and somewhere I love to return to when I can.

Another ryokan of note is Fujioto in Tsumago. An old postal town in the Kiso Valley within the Japanese Alps, Tsumago sits on the Nakasendo Highway, a road formerly used by merchants and samurai journeying between Tokyo and Kyoto in the Edo period (1603 – 1868). There’s plenty of opportunity to explore your surroundings from the ryokan, either ambling around the town, which is government protected to preserve its historic architecture, or into the valley itself.

Fujioto is small with only nine rooms, and a stay here feels like a step back in time as the property remains much the same as it was over 200 years ago. It’s a little more basic than Hakone Ginyu, but it’s really authentic, and the owners are very friendly and welcoming, and the food fantastic.)

Tsumago can be reached in four and a half hours by train from Tokyo.

Take part in a traditional pastime

Kyoto, two and a half hours south of Tokyo is considered the cultural heart of Japan thanks to its collection of temples, shrines, gardens and traditional wooden architecture. Here you can take part in a Japanese pastime with a group of local ladies who are experts in anything from calligraphy and tea ceremonies, to introductions to kimono wearing and cooking lessons.

I took part in a private tea ceremony while in Kyoto. Despite having lived in Japan for six years, I had no idea about the history of this practice, or why it’s become so ingrained in Japanese society.

I arrived at a machiya, a traditional wooden townhouse, to be met by my kimono-wearing teacher and tea expert. She explained the history of the ceremony before demonstrating the tea making process. I had a taste before attempting to replicate the process myself, under the watchful eye of my teacher. Most tea in Japan is green and in its rawest form, so tastes quite bitter. It’s also frothy as you whisk it during the tea making ceremony.

Alternatively, you could take part in a kembu experience to learn about samurai culture, which includes a lesson on sword technique.

Tokyo is a highlight in itself and it’s worth giving yourself enough time to explore its many faces. The city is easily explored under your own steam by navigating the metro system or simply strolling around on foot.

The Shinjuku district typifies the side of Tokyo that many visitors picture. It’s a buzzing metropolis with neon signs, people on the go and an exciting atmosphere. Elsewhere, the Harajuku district is where you’ll see Japan’s young and hip showcasing their whacky fashion sense, a far cry from Japanese tradition.

The New York Bar in the Park Hyatt hotel is a great place to enjoy a cocktail and take in the bright lights of Tokyo at night. You may recognise the bar from the film Lost in Translation. It’s one of my perennial haunts in the city for pre-dinner drinks.

Tokyo is a city of contrasts, and amongst the towering skyscrapers you’ll find little pockets of calm, where well-preserved temples and shrines offer a moment of contemplation away from the hustle and bustle of the city. Meiji Shrine, with its wooden columns and copper roofs, and the brighter red and gold Senso-ji Temple are two such places.

Tokyo is not short of options of places to stay. I rate the Conrad hotel for its location, as it’s close to Tokyo’s main train station, the Tsukiji Fish Market and Hamarikyu Gardens.

Relax on the beaches of Okinawa

If you’d like to spend time on the beach during your Japan honeymoon then Okinawa is a fitting choice. A collection of over 160 islands with a sub-tropical climate and beaches to rival those of the Maldives, this archipelago is a direct contrast to Japan’s fast-paced cities.

Okinawa is a short domestic flight from Honshu, Japan’s main island. For a quieter experience, head to Miyako Island where accommodation tends to be smaller, boutique properties that lead onto white sand beaches. If you’d like an island that is a little more active, there is Ishigaki Island. Here you can scuba dive and snorkel, or take day trips to nearby Irimote Island, an area of swamps and mangroves that provides the ideal setting for jungle hikes.

For honeymoon couples who would like to explore Japan’s great outdoors away from the crowds, I’d recommend heading to the northern island of Hokkaido. Compared to Honshu, Hokkaido is much less visited by Westerners.

The area is known as Japan’s ‘wild north’, a collection of tree-covered national parks, fishing towns and mountain villages. The best way to travel around is to drive along the island’s quiet roads. Getting behind the wheel is an absolute pleasure, especially during Koyou season when the landscape is awash with autumn hues.

During the summer months between June and August the rolling fields of the lowland areas feature rows and rows of brightly coloured flowers. Sunflowers and lavender are harvested here and you’ll drive past contrasting fields of purple and yellow.

Wildlife is also prevalent on Hokkaido, both in the national parks and on the coast. During my time on the island I visited the Shiretoko Peninsula on the east coast where I took a whale watching cruise and was lucky enough to spot a sperm whale. You may also see Hokkaido brown bears, Hokkaido red foxes, deer and an array of seabirds.

Generally, accommodation on Hokkaido is a little more basic than on the other islands, and smaller, boutique properties are harder to come by. Options range from small lodges with limited facilities, to larger, sprawling resorts that can be a little dated. However, what you lose in comfort you gain in experience.

Best time to honeymoon in Japan

Japan is a year-round destination and there are benefits to visiting during each season. March to May is the most popular time to visit, when the cherry blossom is in full bloom. However, I try to visit in the autumn (October to November), when the trees turn a vivid red. At this time, the country is just as impressive as during cherry blossom, but has fewer crowds.

Plan your honeymoon to Japan 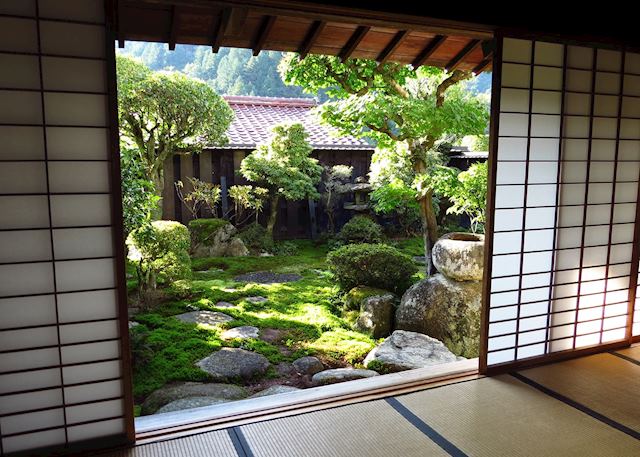