Sur, a placid sea coast town with its striking traditional dwellings, is a pleasant getaway and one of the most important towns in the eastern region. A trip through Sur's labyrinth of streets reveals many fine old houses with carved doors and arabesque windows.

From the corniche, the dhows in the harbour can be seen against the scenic backdrop of the Gulf of Oman. 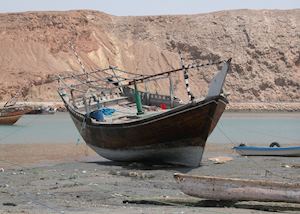 Sur has a long history as one of Oman's foremost trading ports. Though now surpassed by Muscat, it is still a thriving town. A glimpse of how it used to be can be seen in old Sur and the small suburb of Aija.

Sur's dhow yards are world-renowned (and presumed home of the legendary Sinbad the Sailor). Though demand for dhows has declined sharply in the past 100 years it is still possible to see traditional dhow builders at work.

Sur is also famous for its breeding sites of the world's rare sea turtles in Ras Al Jinz, which has been declared a protected wildlife area.

Our itineraries will give you suggestions for what is possible when you travel in Sur, and they showcase routes we know work particularly well. Treat them as inspiration, because your trip will be created uniquely by one of our specialists.

We’ve selected a range of accommodation options for when you visit Sur. Our choices usually come recommended for their character, facilities and service or location. Our specialists always aim to suggest properties that match your preferences.