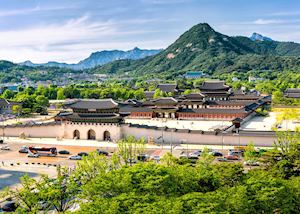 Of Seoul’s five Joseon-era royal palaces, the Gyeongbokgung Palace is by far the largest. It served as the king’s main residence and the seat of the government from 1395 until 1592 when it was destroyed by fire in the Imjin War. Rebuilt in 1865 and meticulously restored, the main entrance to the sprawling walled palace complex is the imposing Gwanghwamun Gate. Inside, some 300 buildings once played host to the royal court along with 3,000 staff.

Just to the north, the Bukchon Hanok Village has the city’s largest collection of hanok, traditional clay-tiled, wooden houses. Wander the narrow streets, visit a teahouse or get an insight into the history and architecture of the district at the Bukchon Traditional Culture Center.

Visit in the evening to see it illuminated, or combine a visit with a trip to Namsangol Hanok Village located in the park at the foot of Namsan Hill, one of the city’s guardian mountains. It features five traditional houses showcasing peasant and aristocratic living during the Joseon Dynasty (1392 to 1910). 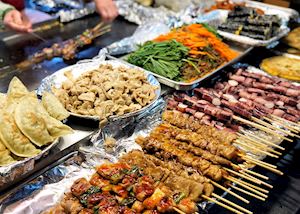 Documenting the history of the Korean War (1950 to 1953) as well as historic battles against the Chinese, Japanese and Mongols, this huge museum offers an insight into the military history of the country and acts as a symbol of hope for its peaceful reunification. As you enter, you pass along a memorial walkway inscribed with the names of Allied casualties, while inside, six large halls display large-scale paintings depicting battles, weapons, uniforms, documentary footage and interactive simulated battlefields. Outside, the exhibits continue in the extensive gardens.