The jigsaw of nations across Southeast Asia allows you to combine countries, cultures and experiences with ease. To explore the region thoroughly you’d need months or even years, so we’ve picked out five trips that, in about two weeks, give an insight into a pocket of the subcontinent.

Each country pairing offers something a little different, along both the well-known routes and lesser-trodden paths. These journeys are by land or river, giving you time to stop off at remote Khmer temples, rarely visited national parks — or simply try a cup of rice whiskey along the way.

The ‘must-see’ Cambodian sights tend to be clustered in Siem Reap and Phnom Penh, with visitors predominately in satellite around the two cities. Undoubtedly, the Temples of Angkor and the stoic capital are significant, but they give just a small impression of the country.

This two-week trip starts in Siem Reap but takes you beyond these attractions, driving south into rural Cambodia, to the trading port of Kampot and the mangrove forests of Koh Kong. This leads you to the undeveloped Cambodian coastline, which either has very basic (and busy) slices of beach or exclusive private islands.

For an ideal beach, drive north along the Cambodian coast into Thailand. Here, you’re a boat ride from the island of Koh Chang. One of Thailand’s largest islands, it’s dominated by Mu Ko Chang National Park, leaving it comparatively undeveloped.

Koh Chang is also easier to get to from Cambodia than Thailand itself, keeping it quiet and the hotels good value. The Dewa, a contemporary property built from local materials, had just the beach I was looking for: a long slip of blonde sand shelving into an aquamarine sea.

Most people visit Angkor Wat to see sunrise. I suggest heading to a smaller, quieter temple like Banreay Srei, leaving Angkor Wat until the afternoon when the crowds have dissipated. Linger until dusk for a quality of light that makes for excellent photographs.

Northern hills of Vietnam and Laos by Alex

If it’s the scenery of Southeast Asia that interests you, and you have two weeks to spare, the mountainous highlands that stretch across the region are at their most dramatic in Northern Vietnam and Laos.

Here, you’ll find a region that seems to eschew international borders. Sheer-walled valleys, impenetrable jungle and rivers dictate travel here (the border crossing itself is unassuming). The hill tribes who live here have never formally acknowledged the border, and you’ll find customs and languages that are endemic to each isolated community.

I’m recommending a journey from Hanoi, west to Luang Prabang (one of Laos’ larger cities). It takes about three hours to reach the White Tai community of Mai Chau from Hanoi, and it’s here the forested mountains begin to rise on the horizon. Continue west into Laos and you enter the type of landscape most people only glimpse through a natural history documentary. Until Luang Prabang, you’re in the timeless world of ethnic hill tribes and their riverside villages.

Start in Hanoi with a visit to the Vietnam Museum of Ethnology. This extensive museum will set you up with an introduction to some of the ethnic communities you’ll meet later.

Thailand and remote Myanmar by Mark

For those looking to revisit cherished destinations

If you’ve already checked off the well-known highlights of Myanmar and Thailand, don’t discount a return visit. Starting in Bangkok, you can move from northern Thailand to southern Myanmar, exploring remote temples, border towns and little-visited islands on a trip that takes just over two weeks.

In northern Thailand, you can spend time in one of the country’s food capitals, Chiang Mai, taking a cooking class with a local family and exploring the food-stall-laden backstreets. Move on to the UNESCO World Heritage Site of Sukhothai, once the capital of Siam, and you’ll find a tranquil expanse of medieval ruins, punctuated by carved Buddhas and lotus-bud spires.

From northern Thailand, you’re well situated to cross the border into remote southern Myanmar, from where you can meander west on a rarely trodden trail to Yangon. This is Kipling country, and in his footsteps you can visit Moulmein, the capital of British-ruled Myanmar that inspired his poem Mandalay (a place where he never actually set foot).

You can then reach the tiny state capital, Hpa-An, from Moulmein along the Thanlyin River. Narrower than the Irrawaddy, the river transports you past riverbank temples and villages amid the jungle on a four-hour journey.

This leads you west toward Myanmar’s largest city, Yangon, where you’re thrust back into modern Myanmar to end your trip.

The Victorian-era Strand hotel has a pool that's a welcome respite from the heat in the midst of downtown Yangon.

Off-the-beaten-track Laos and Cambodia by Heidi

For the next step in intrepid Southeast Asian exploration

I’m often asked by veteran visitors to Southeast Asia to plan them something new. This ten-day trip, which I’ve tried and tested, would fit the bill. It takes you through southern Laos, nudging the Thai border before entering northern Cambodia. Aside from a few determined backpackers, I barely saw any other visitors. I suggest adding on time in Siem Reap to slacken the pace at the end of your journey.

Starting in the Laos capital, Vientiane (which in itself feels like a large town), you get a glimpse of commercial Laos before plunging south into narrow river valleys that cut through limestone hills.

The drives are long and the valleys can feel endless, but you can stop at riverside villages that rarely see a new face, or take a boat into the yawning mouth of Kong Lor Cave. So unexplored is this region that I was one of the first visitors to camp in Nam Theun National Protected Area, a rich ecosystem of evergreen forest, pine stands, cloudforest and riverine wetlands.

As you continue to drive south, the Laotian landscape flattens out as the Mekong and its tributaries thread in. This was once the Kingdom of Champasak, and you’ll see remnants of colonial-era buildings and once-grand temples between wooden-stilt houses.

After crossing into Cambodia, you’re a short drive from the border town of Preah Vihear. It’s newly opened to visitors after a long-running dispute between Cambodia and Thailand for ownership of nearby Wat Phou Temple. This 9th-century Khmer complex leads onto the Angkor Road, an ancient trade route you can follow to Siem Reap.

This isn’t for you if you’re looking for a luxurious journey, but I took real pleasure in the sheer remoteness of SpringRiver Resort, near Kong Lor Cave. Along the banks of a moss-green river are 16 traditional stilted bungalows, where you can sit and watch river life pass by.

North Thailand and Laos by Alex

For a journey that balances adventure, comfort and authentic cultural experiences

For me, travel is about the journey. It’s true that a network of short flights make travel across Southeast Asia quicker, but if you tackle a route by land the slower pace really allows you to explore.

That doesn’t necessarily mean you have to stay on terra firma. I often plan this two-week trip for people to include a day cruising along the Mekong from the Laos border, stopping to visit minority villages along the way.

Starting in Chiang Mai in northern Thailand, you can travel northeast to Chiang Rai, where the roads narrow, villages get smaller and, as you near the Laotian border, ATMs become extinct. It’s a natural progression to continue on to Laos, where, after meandering past stilted houses and isolated communities by boat and car, you eventually reach Luang Prabang and return to relative comfort.

The borderlands between Chiang Rai and Luang Prabang are occupied by tribes who descend from the Shan, migrants from northern China. As you travel through the region, you’ll happen upon many tribes who share a history but have developed very different beliefs and traditions.

Highlights of the journey

After journeying through Laos, you can relax in comfort at Muang La Lodge. Most of the staff are from the local community, and the riverfront guest bungalows have been built using local techniques. There are natural hot springs to soak in as well as an open-air restaurant — I suggest the five-course taster menu. 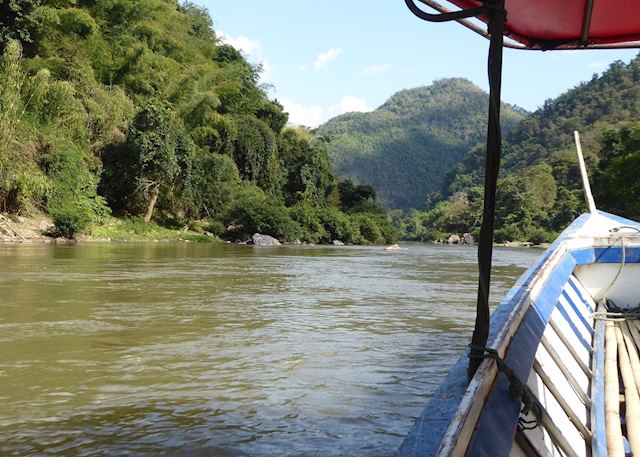