With a storied musical history, innovative museums, two striking cathedrals and two rival football clubs, Liverpool is an attractive, maritime city. The city’s roller-coaster fortunes have seen it cycle through periods of boom and bust throughout its history, but ongoing urban regeneration has recently transformed it into one of northern England’s most vibrant, popular and engaging cities. Renowned as the birthplace of The Beatles and still home to a thriving live music scene, Liverpool has a well-deserved reputation for its affable and fun-loving nature and its citizens’ obsession with football.

Though you can still trace the history of the Beatles, there’s more to Liverpool than just the Fab Four. I love the contrasting cathedrals and revitalized historic waterfront, and browsing the hip shops and street art in the Baltic Triangle.

Things to see and do in Liverpool

A hotbed of musical innovation since American GIs landed here in large numbers during World War II, Liverpool was where John, Paul, George and Ringo grew up, attended school and first got together.

They played their first gig at the Cavern Club on Matthew Street, where you can still catch a show today, and used locations from around the city as inspiration for their hits ‘Penny Lane’, ‘Strawberry Fields Forever’ and ‘Eleanor Rigby’. The Beatles Story on Albert Dock is a museum devoted to their lives and work, featuring memorabilia and recreations of venues and locations associated with the band.

Once at the heart of the transatlantic shipping and slave trade, Liverpool generated vast wealth in the 18th and 19th centuries. Later, the docks became the departure point for millions of emigrants setting off for the New World, and, during World War II, the arrival point for roughly one million American GIs in advance of D-Day.

Because they were so vital to the war efforts, the city docks suffered heavy bombing in World War II, leading to a rapid decline in the city’s fortunes. Today, this key part of the city’s history is protected as a UNESCO World Heritage Site and the docks are thriving again and home to several impressive museums, the Tate Liverpool and a host of restaurants and bars.

The Liver Building, the Cunard Building and the Port of Liverpool are probably the city’s most prominent landmarks, a trio of grand buildings that were built in the early 20th century on Pier Head. Known as the Three Graces, they represent Liverpool’s vast wealth, economic importance and international prowess.

The heraldic symbol of the city is the ‘liver bird’, often represented as a cormorant, and two perch on top of the Liver Building. One watches over the sea, the other the city, and legend has it should they fly away, the city would cease to exist.

The Renaissance-style Cunard Building, head of its passenger services until the late 1960s, now houses the British Musical Experience in its ornate luggage room, while the Edwardian Baroque Port of Liverpool Building is topped by a large dome originally intended for the city’s Anglican cathedral.

In 1800, as a reaction to the influx of wealth, the city formulated a grand plan to improve city housing. Over the next 100 years what is now known as the Georgian Quarter grew into an area of elegant townhouses and public buildings.

At the hub of this district, Hope Street is home to the Royal Philharmonic Society, which you can see perform at the Liverpool Philharmonic Hall. Nearby, the ornate Philharmonic Pub is best known as one of John Lennon’s preferred watering holes. More imposing public buildings can be found on William Brown Street where the Liverpool Central Library and the Walker Art Gallery sit.

Hope Street is bookended by the city’s two massive cathedrals, one Anglican and one Catholic.

The neo-Gothic Liverpool Cathedral is Britain’s largest church and was designed by Giles Gilbert Scott, who is best known as the creator of the red telephone box. Construction began in 1904 and its interior is vast but manages to maintain an intimate atmosphere.

A trip to the top of the tower is rewarded by sweeping views of the countryside — with clear skies, you may be able to see Blackpool Tower, 88 km (55 miles) away. Inside, you’ll find works of art by Craigie Aitchison, Tracey Emin, Elizabeth Frink, Christopher Le Brun and Adrian Wiszniewski.

At the far end of Hope Street sits the altogether different Liverpool Metropolitan Cathedral of Christ the King. Fondly called ‘Paddy’s Wigwam’, thanks to its tipi-like structure, the Brutalist cathedral was constructed in 1967 and is the largest Catholic church in Britain.

Ferry across the Mersey

A classic hit by Gerry and the Pacemakers, ‘Ferry Cross the Mersey’ was recorded in 1964 and brought a humble river crossing in Liverpool to international attention. Ferries have operated across the river for more than 800 years and today you can hop on board to see the Three Graces and city’s UNESCO-protected waterfront from a different angle.

One of the boats operating the service is the Dazzle Ferry, decorated by artist Sir Peter Blake (co-creator of the Beatles’ Sgt. Pepper’s Lonely Hearts Club Band album sleeve) in psychedelic style using patterns inspired by those used to camouflage ships during World War I.

Dotted across the foreshore at Crosby Beach and creeping out into the sea, Another Place is a striking installation of 100 life-size statues by sculptor Anthony Gormley. The statues are cast in the shape of his naked body and stare out to sea in silent contemplation, the tide rising and falling around them.

An expression of man’s relationship with nature, the sculptures are eerily compelling but not without their controversy. Crosby Beach can be reached by train from central Liverpool but the sand on which the statues sit is soft, so viewers are advised not to attempt to walk out to the furthest figures.

Liverpool’s two football teams, Everton and Liverpool FC, are part and parcel of the city and its inhabitants’ lives. The more successful of the two, Liverpool FC (the reds) play at Anfield, while Everton (the blues) are based at Goodison Park.

On weekends, throngs of devoted football fans flock to one stadium or the other to cheer on their teams. You can take a tour of both stadiums, but for fans, we suggest attending a live game. There’s nothing like standing in Anfield and hearing the roar of ‘You’ll Never Walk Alone’, the reds’ anthem, in person.

Liverpool can be visited year round with a constant stream of special events, sporting fixtures, festivals and live performances to keep you entertained. However, if you’re planning to spend much of your time outside, the weather is warmer and drier from May to September. 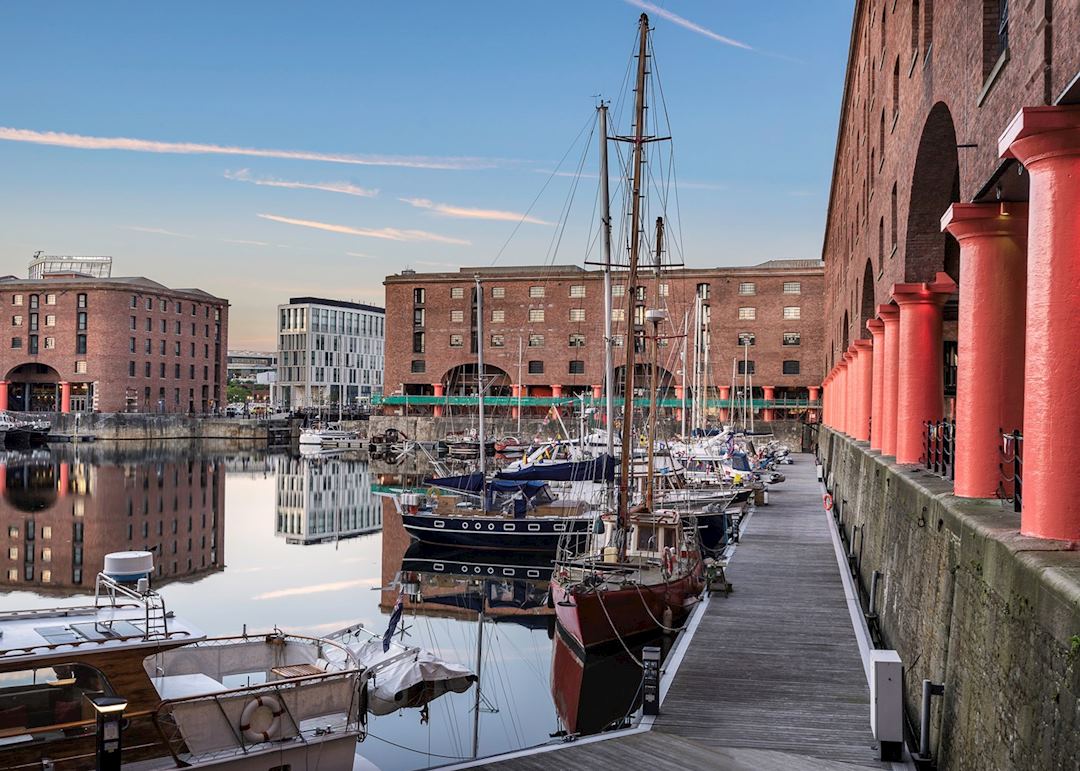 Start planning your trip to Liverpool

We’ve selected a range of accommodation options for when you visit Liverpool. Our choices usually come recommended for their character, facilities and service or location. Our specialists always aim to suggest properties that match your preferences.

Our specialists seek out authentic ways to get to know the places that could feature in your trip. These activities reflect some of the experiences they've most enjoyed while visiting Liverpool, and which use the best local guides.