Most familiar as the home of the Loch Ness Monster, this legendary stretch of water in the north of Scotland has an esteemed place in popular culture. A straight, blue finger cleaving through the Highlands, its setting, mythical status and promise of adventure draw many summer visitors. Even then, it's easy to find a tranquil retreat in the brooding hills and valleys that surround the loch. A ruined lochside castle, quaint towns and villages, and the Highland scenery make it a rewarding destination, easily explored from nearby Inverness.

Long, narrow and extremely deep, Loch Ness contains more water than all the lakes in England and Wales combined. It's an ideal habitat for a prehistoric creature, and sightings of the monster go back as far as the 6th century, when early Christian monks reported seeing a strange animal in the nearby river.

The legend really took off in the 1930s, when stories and accompanying photographs of a creature with a long neck and humps protruding from the water were printed in the newspapers, capturing imaginations around the world. Ever since, visitors have flocked to the loch in search of the beast, but ‘sightings’ are extremely rare and scientific evidence even harder to come by.

Loch Ness is one of four lochs in the Great Glen, a huge fault line that gouged a rift across Scotland. It stretches 36 km (22.5 miles) between Dochgarroch, just south of Inverness, and the picturesque village of Fort Augustus.

At only 2.4 km (1.5 miles) wide, the loch holds dramatic views from the water. You can take a cruise complete with sonar to search for Nessie herself, or go boating or canoeing. Alternatively, simply meander about on foot or by bicycle to get a sense of the unspoiled wilderness of the area and its history and heritage.

You can learn about Scottish clan culture in Fort Augustus, but perhaps the loch's most identifiable historic sight is ruined Urquhart Castle. Sitting on a rocky promontory on the loch shore, this medieval stronghold was once the largest castle in Scotland. It changed hands on numerous occasions over its long and bloody history.

The castle was eventually destroyed by its owners to prevent it from seizure by the Jacobites in 1692. The ruins are significant, however, and particularly romantic in the soft evening light. You can see the great hall and a prison cell, as well as climbing to the battlements of Grant Tower for sweeping views of the loch. 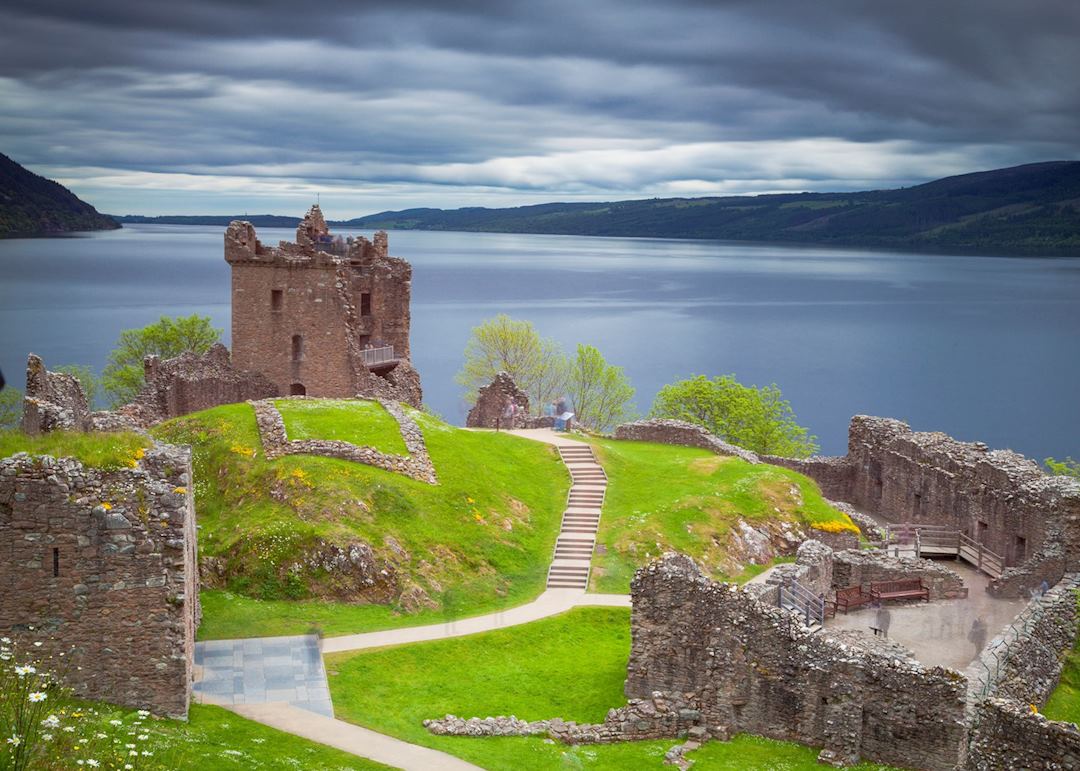 We’ve selected a range of accommodation options for when you visit Loch Ness. Our choices usually come recommended for their character, facilities and service or location. Our specialists always aim to suggest properties that match your preferences.

Our specialists seek out authentic ways to get to know the places that could feature in your trip. These activities reflect some of the experiences they've most enjoyed while visiting Loch Ness, and which use the best local guides.