Ingonish is actually a collection of small villages situated on two bays and divided by a long narrow peninsula called Middle Head. Each village is a seaside resort located close to the gates for Cape Breton Highlands National Park.

The park was established in 1936 when the government set aside 950 square kilometers of the northern tip of Cape Breton Island. The park contains some of Canada's most famous scenery with its mountains, green wilderness and windswept coastal beauty.

The best known feature of the park is the Cabot Trail that draws thousands of visitors every year and is renowned for being one of the most spectacular coastal drives in North America. 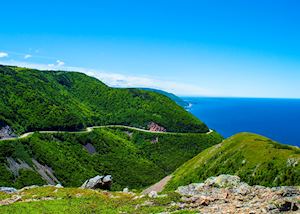 The western side of the Cabot Trail has a strong French influence since this is one of the Acadian Regions. Look on any map and you won't find L'Acadie.

The territory no longer exists as a formal jurisdiction, but it is a thriving community located on Cape Breton Island and south-western Nova Scotia, the central areas of Prince Edward Island and the eastern shores of New Brunswick.

Founded in 1604 in part of what is now Nova Scotia, l'Acadie was the first French colony in North America. Its history is marked by the Grand Dérangement, also called the Great Expulsion, between 1749 and 1755. Under pressure from the British, nearly 12,000 Acadians were deported to France, England and the eastern coast of the USA where they settled in Louisiana (the name of "Cajun" food in the US is a shortening of "Acadian").

Some fled to New Brunswick or Prince Edward Island where they settled, and others returned at a later date to Nova Scotia. The Acadian flag displays the colors of the French national flag with a gold star set in the top left corner, and you are likely to see the colors in abundance as you drive through these regions.

If you are passing through these areas on August 15 then you will witness The Tintamarre carnival where, at 6pm, people pour into the streets and make a symphony of noise and parade in costumes in the colors of the Acadian flag and play improvised instruments.

This sample itinerary will give you an idea of what is possible when you travel in Ingonish, and showcases routes we know work particularly well. Treat this as inspiration, because your trip will be created uniquely by one of our specialists.

We’ve selected a range of accommodation options for when you visit Ingonish. Our choices usually come recommended for their character, facilities and service or location. Our specialists always aim to suggest properties that match your preferences.