Kalaw is located to the west of Inle Lake, and blends the influences of Indian and Nepalese cultures. The area is ideal for walks and treks and it is possible to discover little-visited minority hill tribe villages. Kalaw’s climate is much more pleasant than the baking heat of the dry zone, although in the winter it can get quite cool at night and early in the morning. 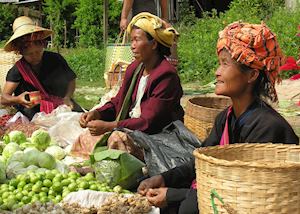 Of the many houses built by the British in Kalaw around the turn of the century, a few still remain in various states of decay and disrepair. Most are now occupied by government or military officials, although some are still eerily silent, apparently undisturbed since their owners left 50 or more years ago. There are a number of colonial private residences, located close to the Amara Resort, if you do have a particular interest in colonial history. The former Kingswood School is now a military hospital and the race track is very overgrown, however Christian services are still held at the Anglican Church and are attended by Shan people educated by American missionaries.

Kalaw has a significant population of Nepali Gurkhas and Indian Hindus, Sikhs and Muslims who were brought to Kalaw by the British to build the railway line. Their influence is visible in the town with many local restaurants offering traditional Indian and Nepalese dishes with a Burmese twist.

Our itineraries will give you suggestions for what is possible when you travel in Kalaw, and they showcase routes we know work particularly well. Treat them as inspiration, because your trip will be created uniquely by one of our specialists.

We’ve selected a range of accommodation options for when you visit Kalaw. Our choices usually come recommended for their character, facilities and service or location. Our specialists always aim to suggest properties that match your preferences.