Written (in English) across the water bottles, posters and tea shops around Loikaw is the phrase ‘Good wine, good sausage, good friends, good memories.’ Indeed, this sums up the capital of Myanmar’s Kayah State, where a sense of community is often quickly fostered with visitors by an offering of homemade (and usually potent) rice wine and a coil of spicy sausage.

Until recently, visitors needed a permit to visit this small eastern state that shares a border with Thailand. While Loikaw is the capital, it’s retained a village feel with one-story wooden houses, wide, dusty roads and small farmsteads where chickens and pigs roam free. Tourism is in its infancy here, so your experience will be a little less polished than elsewhere in Myanmar — you’ll also see few fellow visitors. 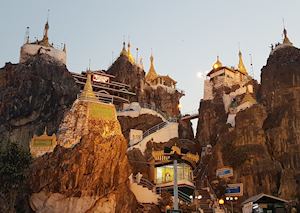 If you’d rather simply snack on a sausage, or try one of the region’s other local delicacies, Loikaw has a nightly street food market along the banks of the Pilu River each night. Myae oh myi shae is a popular dish made from tofu, noodles and seasonal vegetables.

One of the town’s key draws is the surrounding villages, which are populated by a range of ethnic groups, each with their own traditions. Kayah is predominantly a Catholic state, marked by the freshly painted churches along the roadsides. But, before Italian missionaries arrived in the late 19th century, many people were animist, and you’ll still find some villages who hold these beliefs. 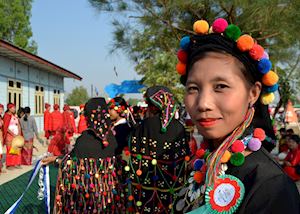 This sample itinerary will give you an idea of what is possible when you travel in Loikaw, and showcases routes we know work particularly well. Treat this as inspiration, because your trip will be created uniquely by one of our specialists.