Sharing an unfenced border with Kruger National Park to the east, Sabi Sands Game Reserve is a private reserve where two perennial rivers (the Sabie and the Sands) have created a riverine bushveld rich in wildlife. Leopard thrive here, and it’s rare not to see one on a game drive. You may also spot the rest of the Big Five (lion, elephant, rhino and buffalo), along with cheetah, packs of wild dog and vibrant birdlife that provides a constant orchestra of sound.

In addition to the year-round game viewing, what sets the reserve apart is its high-quality accommodation and guides. Lodges spoil you with infinity pools, spas and a mixture of international and local food, while the guides’ passion and knowledge shines through on bush walks.

Sabi Sands Game Reserve offers the most complete Big Five safari experience. The intimacy of wildlife encounters is really special, while I’ve found the quality of the guides and lodges hard to beat.

Things to do in Sabi Sands Game Reserve

Spot the Big Five on a game drive 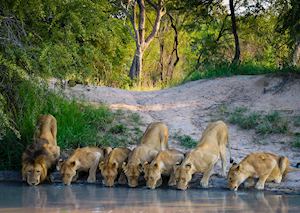 Your lodge will offer game drives in the early morning, late afternoon and occasionally at night. Rangers and trackers with a huge passion and knowledge for the area and its wildlife are your guides, helping to point out and identify the species you encounter. They can also take you to the best locations for seeing the wildlife that most interests you.

The number of vehicles allowed at any wildlife sighting is restricted to two at a time, so you’re able to get more close-up, intimate views of the animals. You may get close to lion gorging themselves on their prey, come face-to-face with a bull elephant displaying his status through head shaking and ear flapping, or shadow a leopard as it marks its territory.

Around 350 bird species make their home in the reserve’s varied habitats of open grass plains, dense riverine bush and dry woodland savannah. Many have a bright plumage that instantly catches the eye, such as the lilac-breasted roller and little bee-eaters, while others require skill and binoculars to pick out. The reserve’s ‘Big Six’ to look out for includes the martial eagle, lappet-faced vulture, Pel’s fishing owl, saddle-billed stork, southern ground hornbill and kori bustard.

During the wetter months (December to April), birds from Europe flock to the area and the bush comes alive with birdsong. The sparse vegetation during the dry season (May to November) means birds are often easier to spot. We recommend rising early to experience the dawn chorus — guides can help to identify unfamiliar species, often just from listening to their call, and you’ll be given a list of birds to tick off.

Learn about smaller species on a guided bush walk

Many of the lodges in Sabi Sands Game Reserve offer daily guided walks through the bush, usually between the morning and afternoon game drives. Heading out on foot gives you a fresh perspective of the reserve and its wildlife inhabitants. There’s more of a focus on seeing and learning about smaller creatures, from insects and birds to reptiles and rodents.

Your guide will be highly trained and experienced in understanding how the animals behave and how close you can get without alerting them to your presence, so the experience is exhilarating without being hair-raising.

Relax and indulge in delicious food at your lodge 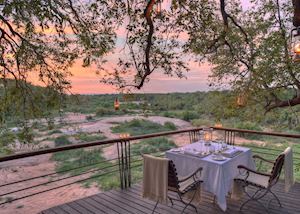 The accommodation in Sabi Sands Game Reserve is among the best in South Africa in terms of service, food and overall luxury. While they keep elements of the traditional African rustic style, the lodges offer sleek, modern amenities that ease your relaxation between safari activities. You can expect spacious lounge decks furnished with sofas and armchairs, infinity pools, Jacuzzis and, in some cases, spas.

The lodges here pride themselves in producing fine cuisine that almost rivals the restaurants of Cape Town and Franschhoek. Choose from eggs Benedict, full English or continental options for breakfast, light lunches of salads, cheeses and breads, and hearty dishes such as kudu filet or impala steak for dinner, served with a bottle of South African wine.

The local Shangaan people are often only met as guides, trackers or staff at your lodge, but it’s possible to visit one of their villages on the outskirts of the reserve to learn more about their culture and way of life.

With a guide, you’re driven out to the nearest village. Nothing is put on for visitors, so you’ll experience authentic village life. You may visit the school or church, talk to a sangoma (herbalist) about his or her methods of grinding herbs and spices to make medicines, and meet with the village chief in his house.

All profits from your visit will go toward providing new or improved facilities for the Shangaan people.

Sleep beneath the stars in a luxury treehouse

Lion Sands Private Game Reserve lies within Sabi Sands Game Reserve and offers two romantic treehouse options for you to spend a night sleeping out under the night sky. Chalkley and Kingston, as they’re called, are both raised above the ground on sturdy wooden stilts. They feature wooden decking areas furnished with a four-poster bed and comfortable seating, as well as an en suite toilet (Kingston also has a shower), and they’re protected by a mosquito net.

On arrival, you’re treated to a tapas-style dinner, snacks and South African wine, before enjoying an evening of stargazing. Lanterns provide the lighting. Lying in bed, you can listen out for hippo grunting and puffing as males defend their pod, distant lion roars alerting you to a pride’s presence, and hyena cackling as they forage for food.

Drive along the scenic Panorama Route 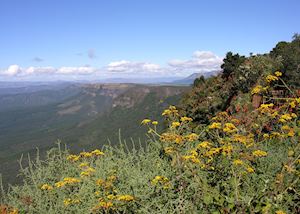 The Panorama Route starts just outside Lydenburg, around an hour’s drive west of Sabi Sands Game Reserve, and ends around 70 km (43 miles) further north near the Echo Caves. The route winds through the dramatic mountains, valleys and canyons of the Mpumalanga Escarpment, part of the greater Drakensberg Range. You can follow it either before or after your safari stay, or take a day trip from your lodge.

The highlight of the route is Blyde River Canyon, where the meandering river has cut a steep-sided gorge 750 m (2,461 ft) deep. You can gaze over red sandstone peaks draped in green vegetation, the most well-known of which are the ‘Three Rondavels’, which resemble the traditional rondavel huts of indigenous tribes.

Game viewing is excellent all year round, but the dry months of May to November are best (September to November especially, as mammals have their young). At this time, waterholes draw in wildlife in larger numbers and vegetation is sparse, so it’s easier to spot game from further away.

The best time for birdwatching is December to January or March and April (February is usually too wet). This is when migratory birds from Europe join the resident species, giving you the chance to tick more off your list.

Our itineraries will give you suggestions for what is possible when you travel in Sabi Sands Game Reserve, and they showcase routes we know work particularly well. Treat them as inspiration, because your trip will be created uniquely by one of our specialists.

We’ve selected a range of accommodation options for when you visit Sabi Sands Game Reserve. Our choices usually come recommended for their character, facilities and service or location. Our specialists always aim to suggest properties that match your preferences.