One of the oldest, largest, and most diverse parks in Africa, the Kruger National Park is the epitome of the safari experience in Africa.

The varying definitions of the Kruger can be confusing: the Kruger National Park is the bulk of the area, managed by South African National Parks (SANParks), while the Greater Kruger Park includes a significant swathe of land on the western flanks of the National Park comprised of private reserves but still given over to conservation and generally sharing unfenced borders with the National Park.

As far as the animals are concerned it is home to all the usual big game. In fact it is one of the few places in Africa where you can see the Big Five (lion, leopard, black rhino, elephant and Cape buffalo). It also boasts a range of habitats with differing ecosystems, allowing you to explore unique combinations of flora.

The facts and figures for the Kruger are worth repeating to reinforce why it is the flagship for conservation on the African continent: nearly 20,000 square kilometers of land home to 147 species of mammal, 507 species of birds and 336 species of tree across 16 distinct habitats.

Accommodation varies from simple rest camps run by SANParks to extremely luxurious private lodges where your every need is tended to. Prices also vary accordingly. 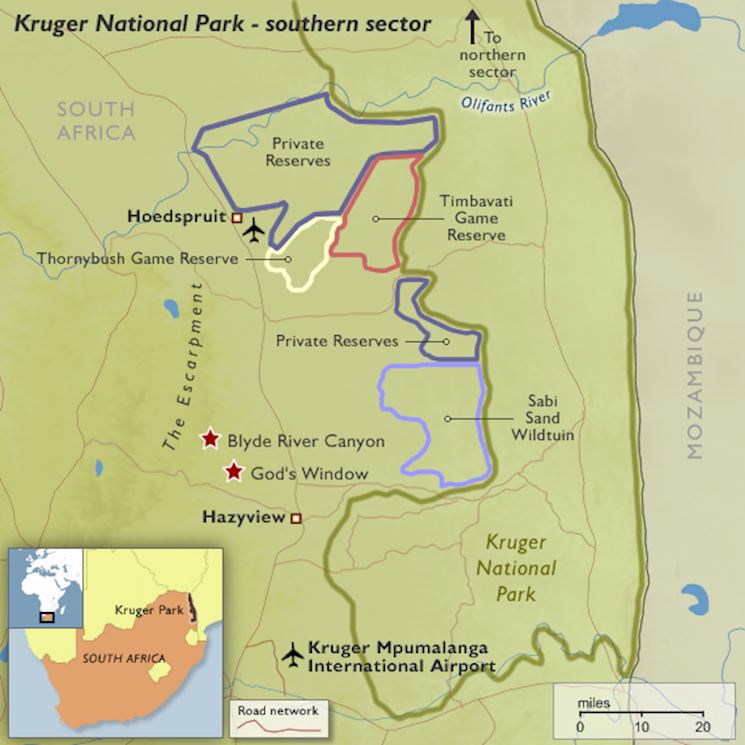 The northern sector of the Kruger Park is regarded as the most rewarding by those who venture up there. In part, this is because of the real wilderness feel of the place, helped by the fact there are so few visitors.

Access does put many off, as it is a long drive up from Phalaborwa airport, or from the central sector of the park, especially given the speed limits when driving within the park.

As well as lots of plains, there are sandstone hills cut through with rivers and dotted with mopane and mahogany trees. The relatively open terrain makes this great countryside for large herds of game, including elephant.

It is in the north that you may be lucky enough to see rare antelope such as the Roan and Sable. The birding here is also reckoned to be the best in the park.

Although remote, the northern sector of the park really does merit the effort required to get here.

The southern sector of the Kruger National Park is the most popular and has the greatest number of visitors. This is due to the fact that it is the most accessible sector of the park, and because the variety and quality of habitat makes for some of the best game viewing in the park.

The Sabie River is one of the defining features of this area of the park, and if you are lucky enough to spot a leopard whilst in the park, it is quite likely to be in this area.

Access to the southern sector can be by car, using one of the five gates (all of which are within easy striking range of Kruger Mpumalanga International Airport), or by light aircraft into Skukuza airstrip.

Some of the biggest and best-equipped restcamps are to be found in the southern sector, along with several private, luxury concessions.

Our itineraries will give you suggestions for what is possible when you travel in Kruger National Park, and they showcase routes we know work particularly well. Treat them as inspiration, because your trip will be created uniquely by one of our specialists.

Map view Places in and around Kruger National Park

Places in and around Kruger National Park

We’ve selected a range of accommodation options for when you visit Kruger National Park. Our choices usually come recommended for their character, facilities and service or location. Our specialists always aim to suggest properties that match your preferences.