A Beatles-themed property, the Hard Days Night Hotel is decorated with original artwork and memorabilia of the famous quartet. Song lyrics hang artistically from the sleek lobby ceiling and over-sized portraits of the band members line the walls. References to the band are artfully woven into the decor in the hotel’s eateries and common spaces with more subtle nods to the Fab Four in the contemporary guest rooms.

These 110 individually-decorated rooms vary in size and shape due to the historic nature of the 19th-century building. Decor is modern but understated with splashes of pop-drama in the original paintings depicting the band member on the walls. The hotel’s lavish Lennon and McCartney suites feature private balconies and are outfitted with some of the property’s most unusual curios and Beatles memorabilia.

Hotel life proceeds to a soundtrack of Beatles’ hits and live performers cover music from The Beatles and other artists in the hotel’s Bar Four on Friday and Saturday nights. Blakes, the hotel restaurant, is named after pop artist Sir Peter Blake, co-creator of the Sgt Pepper’s Lonely Hearts Club Band album sleeve, and is decorated with his artwork. The menu is modern and ambitious with British, European and international dishes served.

While undeniably themed, we found the Hard Days Night Hotel decor to be refined rather than overwhelming. The hotel has managed to strike the right balance of showcasing The Beatles influence without being tacky.

All the contemporary rooms are individually decorated in neutral tones with splashes of vibrancy in the specially-commissioned portraits of the band members by New York artist Shannon MacDonald. All rooms come equipped with complimentary Wi-Fi and an interactive LCD TV with access to the internet, music, and movies. The hotel’s two suites are dedicated to The Beatles’ main lyricists — Paul McCartney and John Lennon. Both suites feature a wraparound balcony and are filled with original artwork and artifacts linked to either Paul or John.

Located in the heart of Liverpool, the Hard Days Night Hotel is just around the corner from the legendary Cavern Club and other iconic hangouts of The Beatles. The galleries dotted along William Brown Street are ten minutes from the hotel and the attractions of Albert Dock can be reached in the same amount of time.

The hotel is equipped with an elevator and several accessible rooms are available.

Our itineraries are there to spark ideas for how you could include a stay at Hard Day's Night Hotel as part of your trip. Treat them simply as suggestions, because every aspect of the trip we create for you will be yours to define. 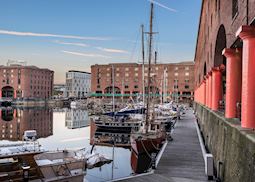