The island of Hawai'i (sometimes referred to as 'Big Island') is the largest, most recently formed of the Hawaiian islands, and it has two distinct sides to it. To the east, Hawaii Volcanoes National Park dominates the landscape. Some of the most active volcanoes on Earth rise from swirling lava fields glowing with molten lava and dotted with hissing craters. You can explore on foot with a guide, following set trails. On the island’s western side you’ll find coffee plantations, sandy coves tucked between foliage-draped cliffs (including the bay where Captain Cook died in 1779), and long sweeps of beach washed by clear waters ideal for snorkelling. Meanwhile, at the island’s heart, Mauna Kea is a dormant giant sloping up into the clouds. You can stargaze from its discovery-making observatory. 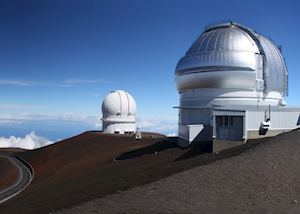 Attributing to more than half of the archipelago’s landmass but only 13% of its population, the island of Hawai'i is wild and untamed. The focus here is on exploring nature. You can walk through moss-green rainforests to see wispy waterfalls and exotic birds. Drive along its coastline for views over sheer cliffs and turquoise waves. Or venture underwater to swim among kaleidoscopic marine life.

One marine experience that we suggest is snorkelling with manta rays. You head out by boat at dusk; special diving lights lure plankton to the surface, which in turn attracts the manta rays. You can then enter the water and snorkel among rays up to 7 m (23 ft) wide, their movements surprisingly graceful given their size.

It’s hard to ignore the huge dormant volcano that rises up from the middle of the island of Hawai'i. The highest peak in the archipelago at 4,207 m (13,802 ft), Mauna Kea is one of the best places on the planet for stargazing. Astronomers based here discovered 11 of Jupiter’s moons from the volcano’s telescopes. 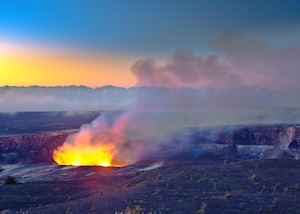 A charcoal-grey, volatile landscape that’s constantly changing, Volcanoes National Park is perhaps the main draw on the island of Hawai'i. There aren’t many other places where you can walk past cinder cones, bubbling lava and vents angrily puffing out steam.

Best time to visit the island of Hawai'i

The tropical climate on the island of Hawai'i means any month of the year is a good time to visit. However, we particularly recommend visiting in June or September to avoid busier periods during school breaks.

Our itineraries will give you suggestions for what is possible when you travel in Island of Hawai'i, and they showcase routes we know work particularly well. Treat them as inspiration, because your trip will be created uniquely by one of our specialists.

Map of Island of Hawai'i

Places near Island of Hawai'i

Photos of Island of Hawai'i

Accommodation choices for Island of Hawai'i

We’ve selected a range of accommodation options for when you visit Island of Hawai'i. Our choices usually come recommended for their character, facilities and service or location. Our specialists always aim to suggest properties that match your preferences.

Ideas for experiencing Island of Hawai'i

Our specialists seek out authentic ways to get to know the places that could feature in your trip. These activities reflect some of the experiences they've most enjoyed while visiting Island of Hawai'i, and which use the best local guides.