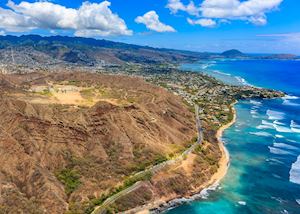 Many trips to Hawaii begin in the archipelago’s capital, Honolulu (‘sheltered bay’). Here, high-rises stand tall behind a curve of golden sand and an unruly scattering of palm trees — it feels as though Manhattan has gone on holiday.

Your lesson eases you in with a 20-minute demonstration on the sand, where you’ll practise techniques such as paddling, turning the board and positioning yourself to standing.

Then, you wade waist deep into the water. Your instructor will help you to stand up on your board as you work on your technique, before you’re free to practise on your own.

We also recommend heading to Oahu’s North Shore, where the full power of the ocean is unleashed. This is where serious surfing takes place, and from Waimea Bay Beach you can watch with bated breath as surfers battle the water, their bodies appearing terrifyingly flimsy against the pummelling waves.

Franklin D. Roosevelt described the Japanese attack on Pearl Harbor in the early hours of 7th December 1941 as ‘a date which will live in infamy’. The aerial ambush resulted in 2,403 US fatalities as ships were sunk while sailors slept, and it sparked the USA’s involvement in World War II. 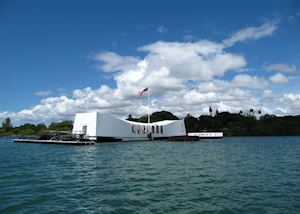 This sample itinerary will give you an idea of what is possible when you travel in Oahu, and showcases routes we know work particularly well. Treat this as inspiration, because your trip will be created uniquely by one of our specialists.