One thing we’ve learnt over the years is that if you’re looking for great food, the locals know best. We’ve found some of the tastiest Thai street food on a tour with a Bangkok resident and a particularly fragrant tagine when invited into a family home in Fez. Our specialists have put their heads together to suggest some of the best ways to experience local delicacies and home cooking.

Once ruled by both Dutch and British colonists, Cape Town has a rich food culture that marries the city’s European influences with its African roots. During the colonial era, slaves were brought over from Indonesia, India, Malaysia and Sri Lanka. Over the centuries, their culinary influences have been passed down through generations of the Cape Malay community.

On this five-and-a-half-hour tour, I sampled dishes that have been prepared and eaten by locals of different ethnicities for centuries. With my private guide, I visited family-run eateries, sizzling street stalls and artisan coffee roasters, while learning about the history and culture of each area and getting to know the people who cook this food every day.

Exploring the city’s African food traditions, I tried a portion of pap — a plain, very thick, porridge-like dish made from maize that’s a staple across Southern Africa. My guide explained that the thickness is so that it can be eaten by hand.

In the vividly painted Bo Kaap district, you can sample Cape Malay specialties such as samosas freshly prepared that morning, babotie (spiced mince baked with a golden egg-based topping), and koesisters (spiced doughnuts).

Visiting an Indian eatery, I ate my first bunny chow (a rich curry served in a hollowed out loaf of bread). We then compared this to the Afrikaans-influenced vetkoek (fried dough bread filled with well-seasoned ground beef).

Finally, we called into an independent micro coffee roaster. The owner talked us through the coffee-making process, before I sat down for a mug of some of the best coffee I’ve ever had.

Join a family for home-cooked Creole food in Mauritius

Many Mauritian hotels offer Creole-style dishes— but there’s nothing quite like genuine home cooking. As part of a guided tour of the island, I joined Marie and her family in her traditional Creole home for lunch.

To get there, I drove through central Mauritius, passing through the town of Curepipe. Marie lives in the middle of a small row of houses that back onto tall sugarcane fields. On arrival, she greeted me with a freshly-squeezed glass of pineapple juice and a massive grin. Only reaching my elbow, she’s a tiny character with a bubbly enthusiasm for cooking that shone through, despite us not sharing a language (my guide joined us to translate).

While there’s a kitchen inside, the majority of the cooking takes place outside under a corrugated iron roof. The traditional cooking technique Marie showed me, feu du bois, uses a wood-fired oven, stoked by blowing into a metal straw. You can see how curry paste is made by grinding spices, garlic and ginger between two stones. Most of the ingredients come from the garden, and a neighbour caught the tilapia fish in a nearby stream.

After the food is prepared, you’ll sit at a heavily-laden table. Marie’s sister, sister-in-law and young granddaughter, Eva, had been pitching in with the cooking, and sat down to join us. This is an opportunity to dip into a variety of dishes, from pumpkin puree and red lentil soup to deer or goat curry. Indian-inspired curries are popular on Mauritius, but Marie’s recipes hark back to African roots, resulting in a more fragrant, sweeter dish.

After a leisurely meal, the women were keen to show me some sega, a dance which originates from mainland Africa — tiny Eva was particularly enthusiastic with her moves. As I departed, they proffered their range of homemade flavoured rum.

As part of the day’s tour you can also visit a French-colonial mansion for a spot of tea tasting. Afterwards, take a walking tour of the capital, Port Louis, for a well-rounded cultural experience.

After working in a high-end hotel as a private chef for a number of years, Nicole began offering cooking classes in her Antiguan home. I headed to the north of the island, a short drive from the capital, Saint John’s, to take part.

On arrival, you’re given a menu listing the dishes you’ll be cooking, all carefully planned around your tastes. A vegetarian, she’d prepared a huge meat-free feast for me.

We dived straight in, whipping up simple coconut crisps to nibble while cooking. You’ll help with a variety of dishes, from lemony chickpea salads to grilled corn fritters, peeling vegetables and chopping fruit. You can also learn about the balance of spices that give jerk marinade its punch.

Nicole likes to explain the history of her cuisine as she cooks, explaining the Indian influences on West Indian food as we made rotis on a hot plate. It’s business as usual for her family: as we cooked, her husband Adam came in for a chat, and she paused mid-lesson to make a quick snack for her daughter.

The finished dishes are spread out across a long table on the veranda. You’ll then spend a lazy few hours eating in the shade of the balmy Caribbean sun as Nicole describes what life is like on the island. She grew up on Monserrat, where her parents owned their own restaurant. Her bungalow is perched atop a hill and as you dine, you can see across to Saint John’s Harbour and the ocean beyond.

As capital of British India, Calcutta became a global city, a history that you can taste in the chow mein served in Tiretta Bazar and Armenian dolma (stuffed vegetables) in the flower market. Ifte was eager for me to try a kathi roll, Calcutta’s most popular snack. Scrambled egg is spread across a paratha (fried unleavened bread) and topped with chutney, paneer and vegetables before being expertly rolled together.

Bengalis are known for their collective sweet tooth, and, after trying some of Calcutta’s sweets and puddings, I understand why. We walked past a number of glass-fronted sweet stalls where dairy, nuts and sugar (the key ingredients in most Indian sweets) have been assembled into a variety of balls and squares.

Rasgulla are white dumpling-shaped balls of cottage cheese that have been soaked in a very sweet syrup so that they dissolve in your mouth. If that’s a little too much sugar, I suggest finishing with mishti doi, a sweetened yoghurt (served in another clay pot). Here, the sugar is curbed by the tang of the yoghurt — it’s a refreshing break from the Calcutta heat.

Much has been written about Bangkok’s street food. There may be sky bars with panoramic views and fine-dining restaurants with innovative tasting menus, but in Bangkok, it’s the street stalls that steal the limelight.

The city’s street food has, with good reason, become legendary but frankly, I find this can make it all a little overwhelming. There are so many regions to explore and specialities to taste that it can be hard to know where to start. For me, the best way to make the most of your time in the city is to take a guided tour with a local resident.

With my guide, I explored Bang Rak, a commercial district where hundreds of food stalls are tucked into side streets and back alleys to feed the office workers in the skyscrapers that tower above. Many workers have moved here from across Thailand, and are always eager to find dishes from their home town or province. It’s an ideal way to dip your toe into regional specialities that you might see elsewhere in your trip.

My guide and I perched in tiny plastic chairs to sample gaeng massaman, a thick curry from southern Thailand. Served with a rich coconut-milk-based sauce, I’m glad we opted for a small portion. As I tried tom yum goong, a fragrant, sweet-and-sour soup, my guide explained the importance of balance in Thai cuisine between sweet, salty, sour and spice.

You’ll also get a feel for the heat of Thai food, and can learn key Thai words including mai phet (no spice) or phet nit noi (a little spice). If you do like fiery dishes, try laab, a minced pork dish from northeast Thailand that’s served with plenty of fresh chillis, coriander and fish sauce.

Cartagena, Colombia’s quaint walled city on the Caribbean Sea, is brimming with good places to eat. Not surprisingly, seafood (and the signature local tipple, rum) features highly on menus. But so do some of the zany-looking, neon-bright tropical fruits so beloved to everyday cooking in this country.

We started off not in a kitchen, but in one of the city’s strictly-locals-only markets, Bazurto, where I was accompanied by Jaime, Carmen’s head chef.

Jaime chatted to me about Colombian cuisine while picking out some of the choicest fruit specimens for me to try: scaly-skinned but sweet-fleshed cherimoya (‘custard apples’) and the piercingly citrusy, tangerine-like lulo.

Back in Carmen’s kitchens, Jaime coaxed me into preparing a three-course lunch using some of the fruits and fresh fish we’d just bought, as well as some more classic Caribbean ingredients: green plantains, coconut rice, and fresh palm hearts. 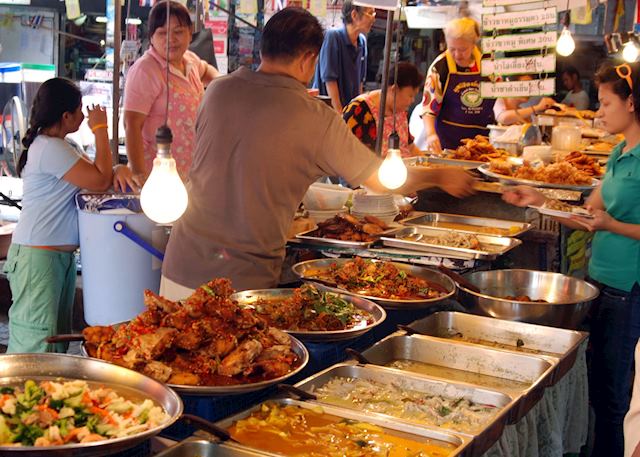