If there’s one guarantee that comes with traveling to distant countries, it’s that you’ll get to experience authentic local cuisine.

And if there’s one thing we’ve learned over the years of helping people travel the world, it’s if you’re looking for great food, the locals know best.

From the tastiest Thai street food on a tour with a Bangkok resident to a particularly fragrant tagine inside a family home in Fez, here are some of the best ways to experience local delicacies and home cooking. 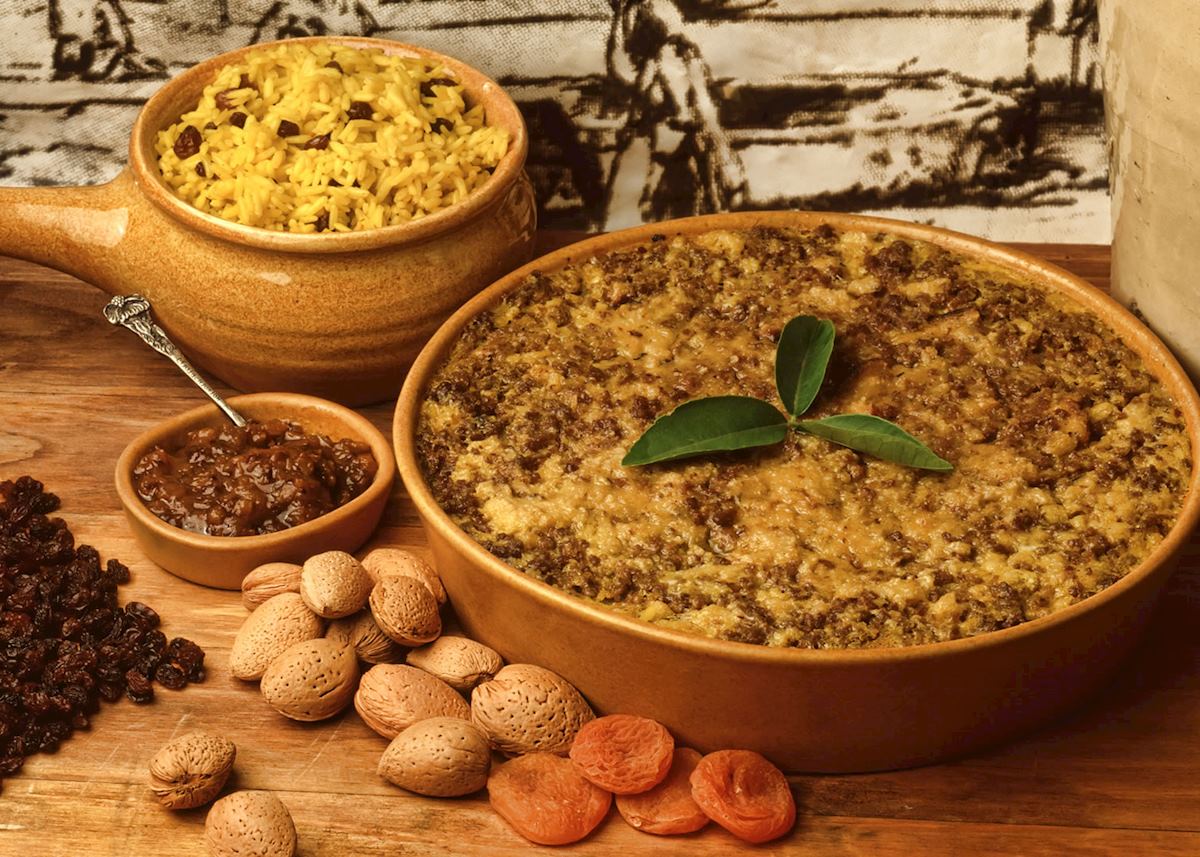 Once ruled by both Dutch and British colonists, Cape Town has a rich food culture that marries the city’s European influences with its African roots.

During the colonial era, slaves were brought over from Indonesia, India, Malaysia and Sri Lanka. Over the centuries, their culinary influences have been passed down through generations of the Cape Malay community.

On this five-and-a-half-hour tour, you’ll sample dishes that the diverse locals have been preparing and eating for centuries. With a private guide, you’ll visit family-run eateries, sizzling street stalls and artisan coffee roasters, while learning about the history and culture of each area and getting to know the people who cook this food every day.

Exploring the city’s African food traditions, try a portion of pap — a plain, very thick, porridge-like dish made from maize that’s a staple across Southern Africa. Its thickness is so that it can be eaten by hand.

In the vividly painted Bo Kaap district, you can sample Cape Malay specialties such as freshly-prepared samosas, babotie (spiced mince baked with a golden egg-based topping), and koesisters (spiced doughnuts).

Visiting an Indian eatery, sample the bunny chow (a rich curry served in a hollowed out loaf of bread). Then compare it to the Afrikaans-influenced vetkoek (fried dough bread filled with well-seasoned ground beef).

Finally, you can visit an independent micro coffee roaster, learn from the owner about the coffee-making process, and sit down for a mug of some of the best coffee you’ll ever have. 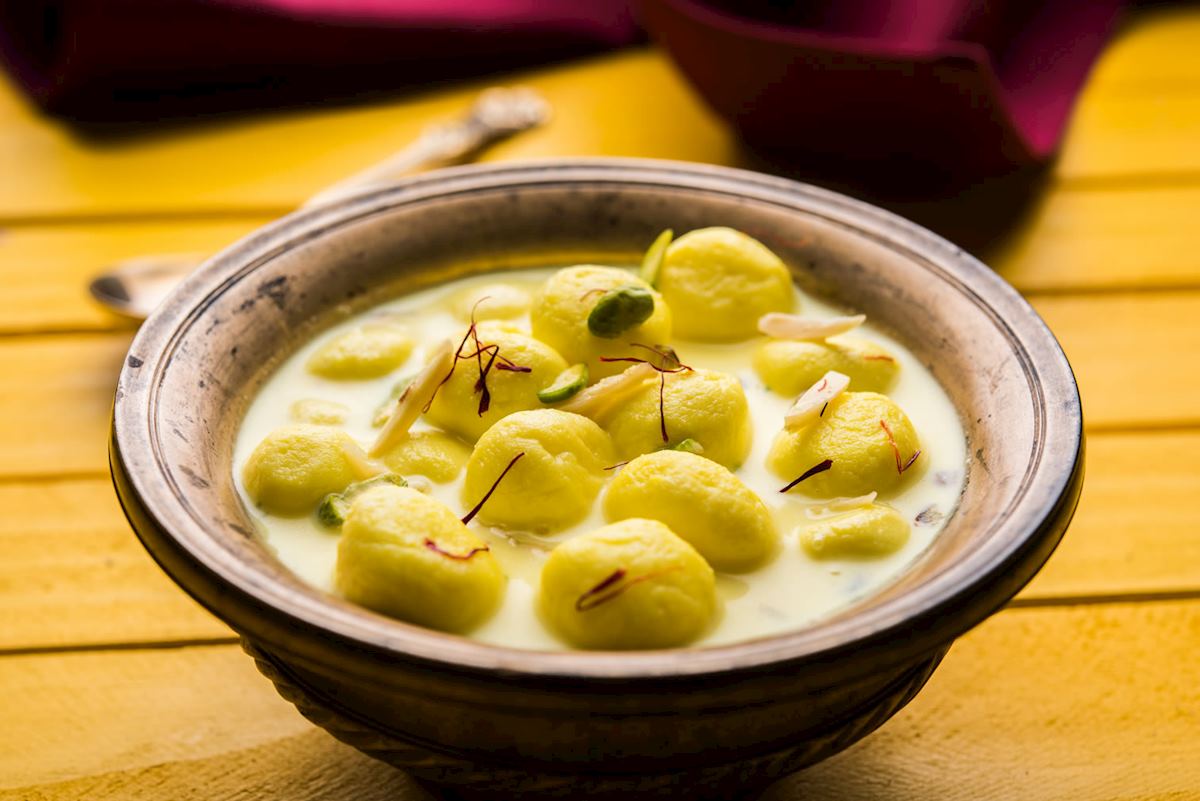 The capital of British India, Calcutta became a global city, a history you can taste in the chow mein served in Tiretta Bazar and Armenian dolma (stuffed vegetables) in the flower market. Be sure to try a kathi roll, Calcutta’s most popular snack. Scrambled egg is spread across a paratha (fried unleavened bread) and topped with chutney, paneer and vegetables before being expertly rolled together.

Bengalis are known for their collective sweet tooth, and after trying some of Calcutta’s sweets and puddings, you’ll understand why. You’ll walk past a number of glass-fronted sweet stalls where dairy, nuts and sugar (the key ingredients in most Indian sweets) have been assembled into a variety of balls and squares.

Rasgulla are white dumpling-shaped balls of cottage cheese that have been soaked in a very sweet syrup so that they dissolve in your mouth. If that’s a little too much sugar, consider finishing with mishti doi, a sweetened yoghurt (served in another clay pot). Here, the sugar is curbed by the tang of the yoghurt — it’s a refreshing break from the Calcutta heat. 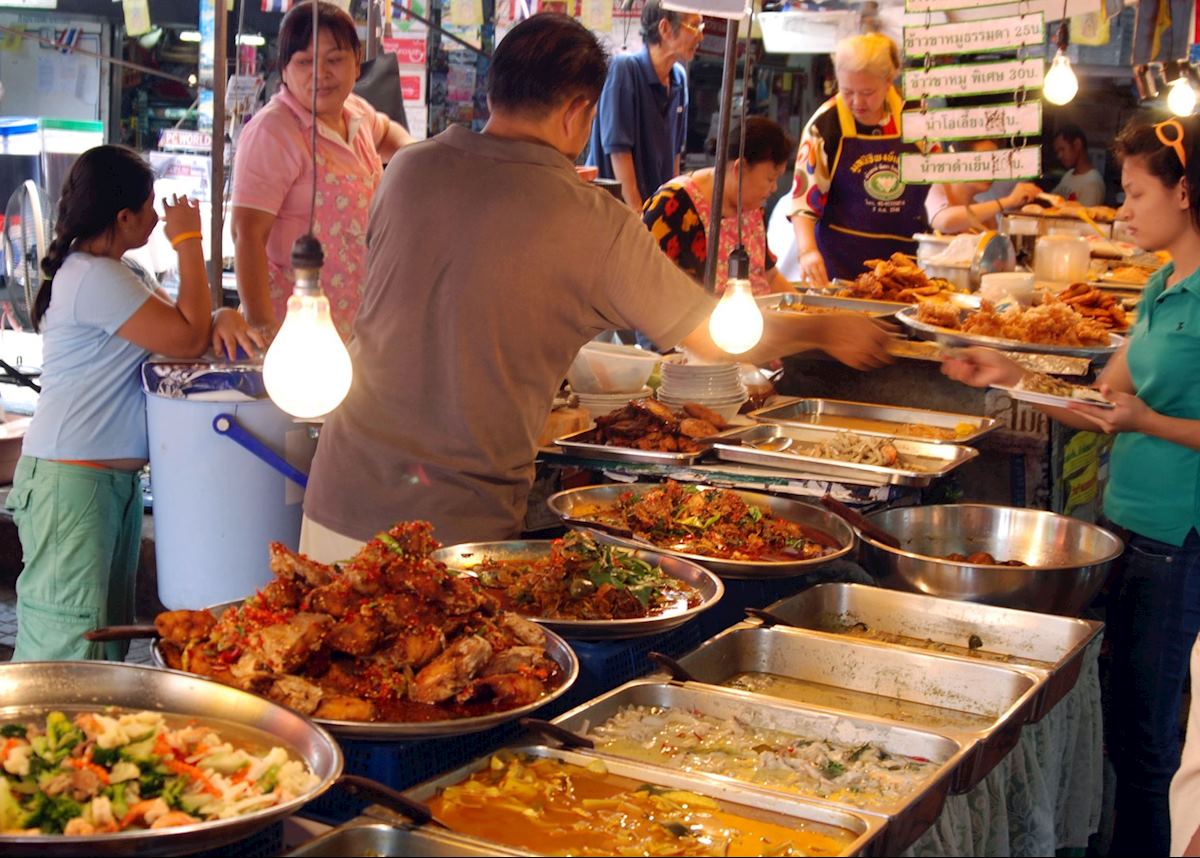 Much has been written about Bangkok’s street food. There may be sky bars with panoramic views and fine-dining restaurants with innovative tasting menus, but in Bangkok, the street stalls steal the show.

With good reason, the city’s street food has become legendary but it can easily feel a little overwhelming. There are so many regions to explore and specialities to taste that it can be hard to know where to start. The best way to make the most of your time in the city is to take a guided tour with a local resident.

A good starting point is Bang Rak, a commercial district where hundreds of food stalls are tucked into side streets and back alleys to feed the office workers in the towering skyscrapers above. Many workers have moved here from across Thailand, and are always eager to find dishes from their home town or province. It’s an ideal way to dip your toe into regional specialities you might see elsewhere in your trip.

Perch in tiny plastic chairs with your guide to sample gaeng massaman, a thick curry from southern Thailand. Served with a rich coconut-milk-based sauce, you might want to opt for a small portion. As you try tom yum goong, a fragrant, sweet-and-sour soup, your guide may explain the importance of balance in Thai cuisine between sweet, salty, sour and spice.

You’ll also get a feel for the heat of Thai food, and can learn key Thai words including mai phet (no spice) or phet nit noi (a little spice). If you do like fiery dishes, try laab, a minced pork dish from northeast Thailand that’s served with plenty of fresh chillies, coriander and fish sauce. 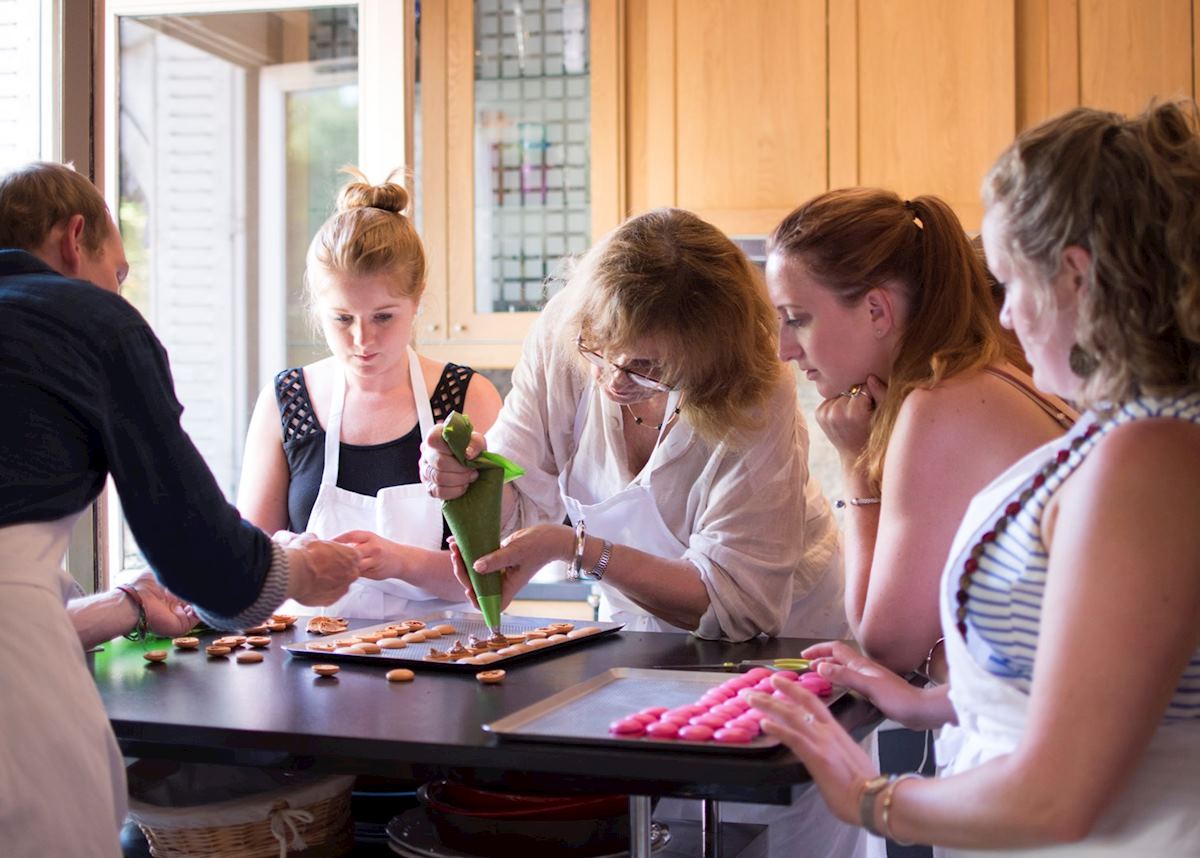 There may be no place better to eat like a local than in Paris, a city known for nearly religious devotion to exquisite food — at home and in restaurants.

Macarons are those delicate little sandwich cookies that come in a veritable rainbow of shades, each denoting a different filling. Rosy red means raspberries, brown means chocolate and these days green might mean either traditional pistachio or the slightly more outré matcha tea with mango filling. A recent surge in popularity means they’ve become ubiquitous around the globe, but the sweet treat is quintessentially Parisian.

On your next visit to France, try taking a cooking class with Chef Marthe, a smiling woman with brown curls and quick, capable hands. She once ran a bistro in the 11th arrondissement, but now teaches exclusively from the small but well-equipped kitchen of her classic Haussmann apartment. With the afternoon sun streaming in through the huge windows overlooking a traditional Parisian boulevard, she walks through the procedures for creating these tantalizing treats.

You’ll sift, whip and pipe under her cheerful, patient tutelage, using only her standard home equipment. Because it’s not a high-end professional kitchen, you’ll be able to confidently recreate the recipe in your own kitchen after you return.

Once they’re baked, cooled and filled, you’ll finally taste your creations (though Marthe suggests they will be even better the next day, when they have had time to mellow into a lush, pillowy texture). The shell of the almond-based meringue will be shatteringly crisp and fine between your teeth, giving way to the bright berry burst of filling, the whole mélange dissolving on your tongue into a happy medley. 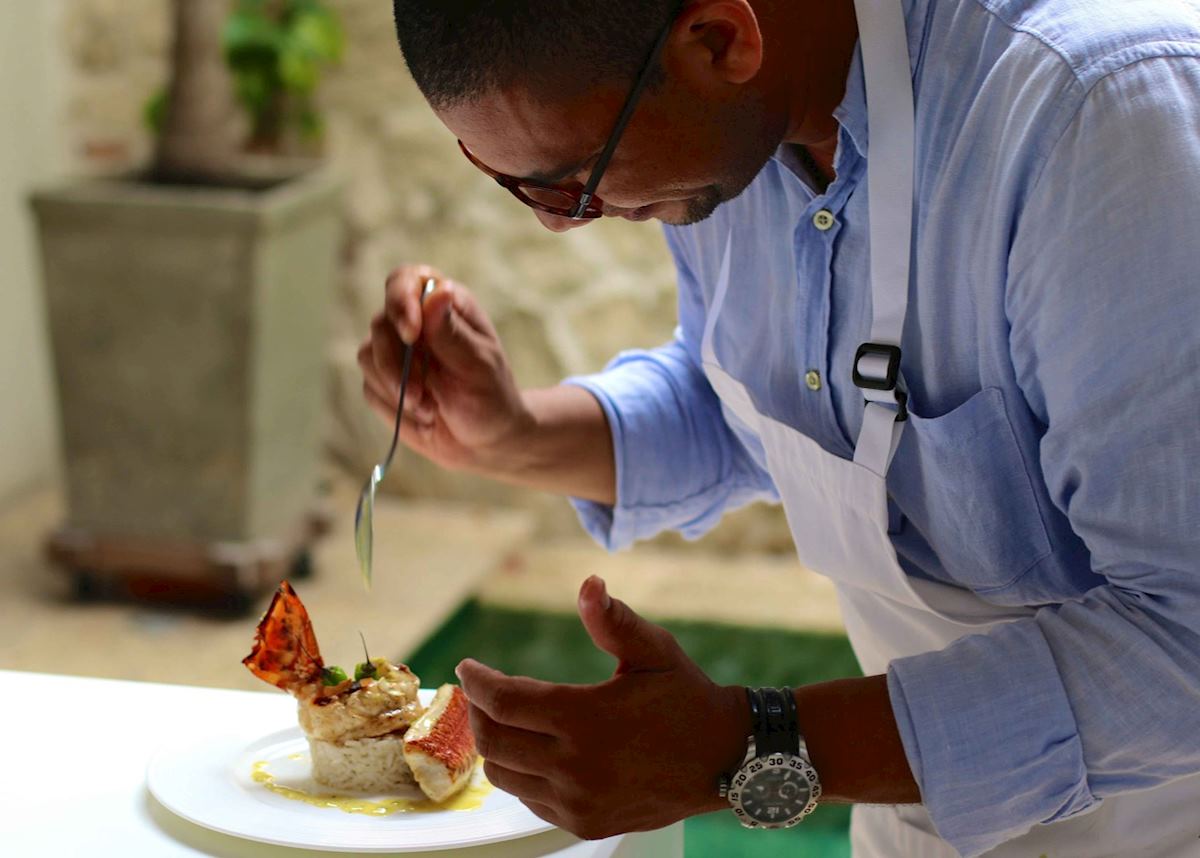 Cartagena, Colombia’s quaint walled city on the Caribbean Sea, is brimming with exquisite places to eat. Not surprisingly, seafood (and the signature local tipple rum) features highly on menus. But so do some of the zany-looking, neon-bright tropical fruits so beloved to everyday cooking in this country.

You’ll start off not in a kitchen, but in one of the city’s strictly-locals-only markets, Bazurto, accompanied by Jaime, Carmen’s head chef.

Jaime will likely chat about Colombian cuisine while picking out some of the choicest fruit specimens for you to try: scaly-skinned but sweet-fleshed cherimoya (“custard apples”) and the piercingly citrusy, tangerine-like lulo. Back in Carmen’s kitchens, Jaime will coax you into preparing a three-course lunch using some of the fruits and fresh fish you just bought, as well as some more classic Caribbean ingredients: green plantains, coconut rice, and fresh palm hearts.

Sound like your kind of adventure? Here’s how to start designing your next trip

A food journey through Vietnam: bun cha to banh mi Morocco food experiences Exploring countries through their food and drink
Get in touch