This lavish hotel is situated close to the heart of Reims, giving you convenient access to all the city’s historical attractions, shops and restaurants while providing a peaceful retreat thanks to its large, leafy grounds. Built in 1904, the building served as a family home for many years, with stone pillars and cherub statues adding to its striking appearance.

Its interiors are the work of designer Pierre Yves Rochon, blending Rococo and Belle Époque styles. Original portraits and tapestries hang from the walls, chandeliers illuminate the rooms from above and large windows with thick drapes let in natural sunlight.

Its palatial style, coupled with just 20 guest rooms, makes for an exclusive feel. Each room is individually decorated and varies in layout, but all exude elegance.

A highlight is having the chance to dine in the hotel’s two-Michelin-starred restaurant, which serves sophisticated French cuisine. There’s also a second French restaurant and a bar where you can sit down to afternoon tea.

This is a beautifully appointed hotel in a prime location within Reims. We like to retreat to its lush grounds after exploring the city, but you’re also well placed here for exploring the Champagne countryside.

The 20 rooms span three categories, but each has its own style to suit its layout, whether it’s using patterned wallpaper or floral-print fabrics. All have an en suite bathroom, most with both a bathtub and shower. Superior rooms look out over the side of the nearby castle, deluxe rooms have views over the park or courtyard, and prestige rooms have full views of the castle along with a balcony or terrace in most cases. Some also have a fireplace, and all are equipped with a TV, Wi-Fi, a safe and a minibar.

The hotel is located in central Reims, close to many shops, restaurants and attractions. You’re within walking distance of some of the region’s most revered Champagne houses, including Taittinger, Veuve Clicquot and Pommery, as well as being close to the UNESCO World Heritage Site of the Abbey of Saint-Remi and Parc de Champagne.

Nearby, the property can help arrange:

Reims and nearby places 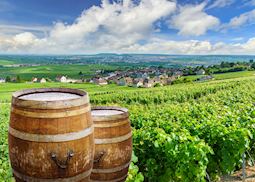